Pictures of the protest held on 31st May 2010 outside Sheffield Town Hall are attached. 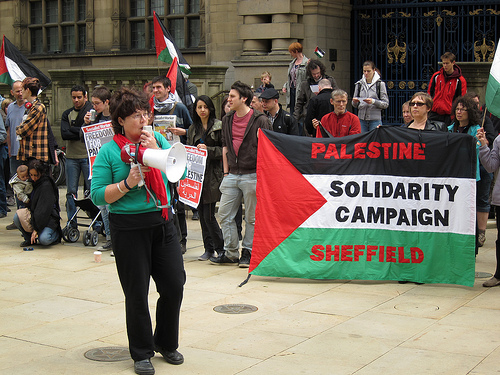 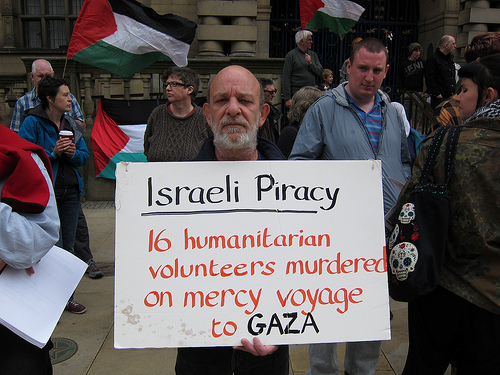 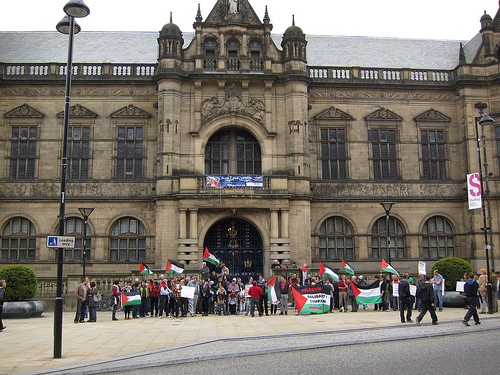 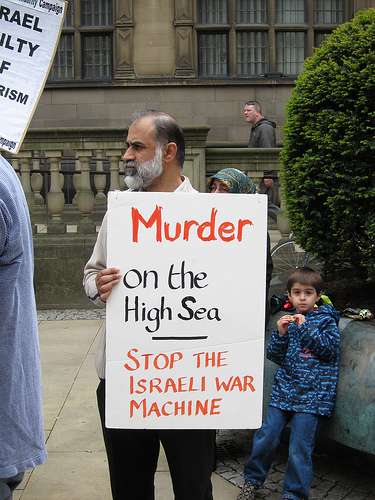 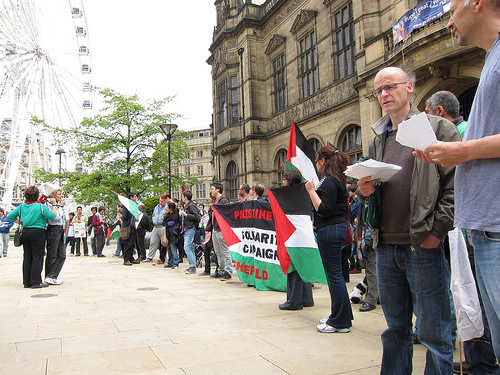 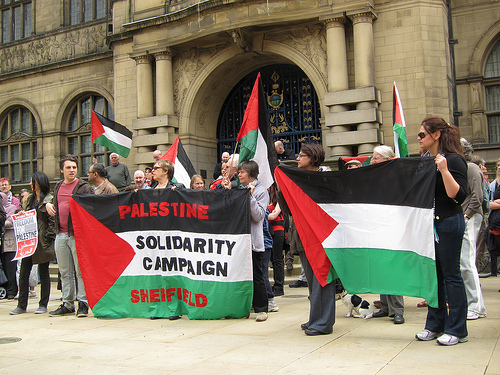 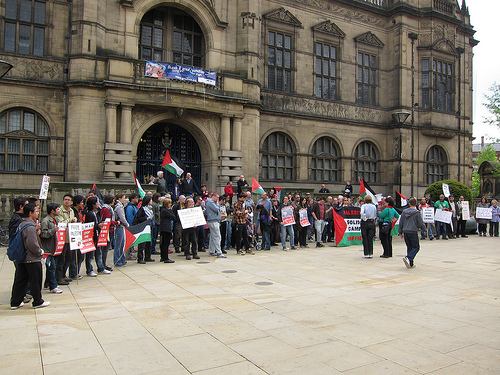 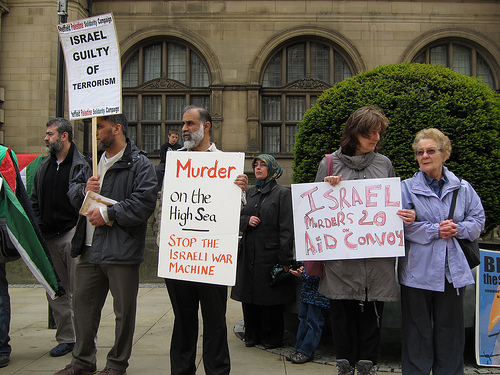 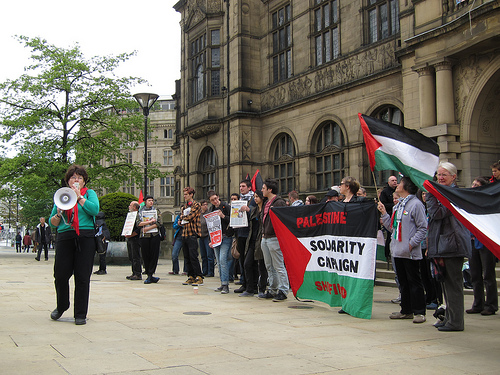 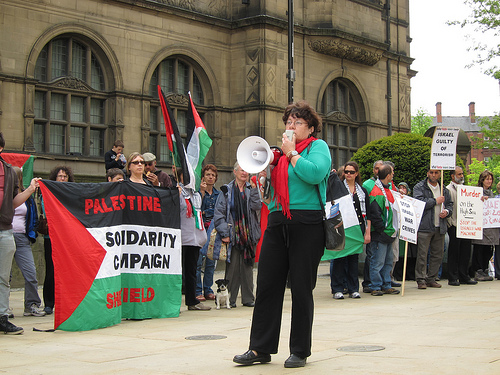 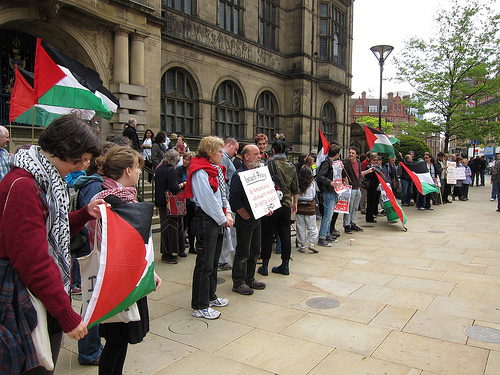 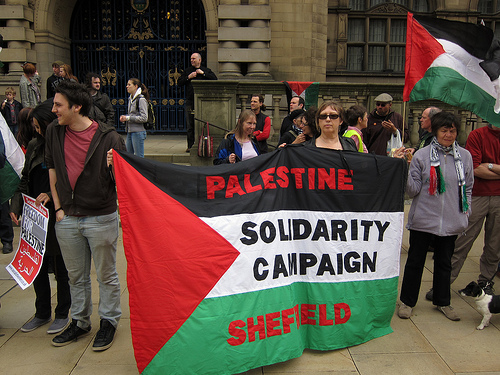 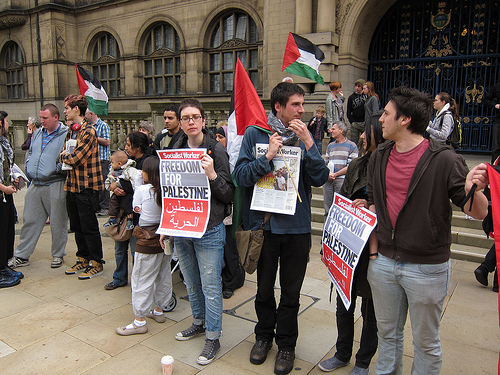 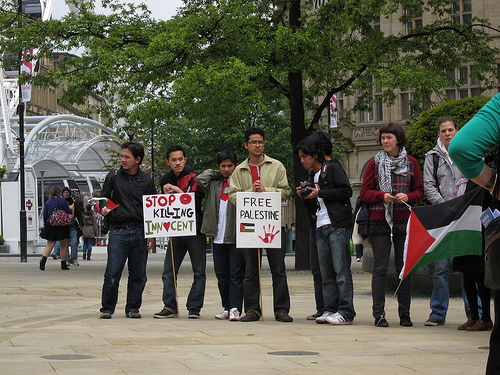 We will hold an emergency protest against the Israeli atrocities outside Sheffield Town Hall this Wednesday, 2nd June, at 5 p.m. Please bring placards and tell your friends.

Keep up to date with events regarding the flotilla via

*Complain to the BBC* about any biased coverage. Insist that they speak to spokepersons from Free Gaza and the Flotilla. Phone BBC complaints: 0370 0100 222.

*Contact your Constituency MP *calling for an emergency debate on the attack. Use/ adapt the model letter below:

I write to ask you most urgently to protest to the Foreign Office at the British government's failure to intervene with Israel to demand safe passage for the Gaza Gonvoy of unarmed ships carrying humanitarian aid for Gaza, with civilian supporters from 40 countries on board, including British citizens.

We now ask you to insist the British government condemns unreservedly Israel's brutal attack on the Convoy in international waters which has led to the loss of life and injury of unarmed peaceful protesters. This is consistent with Israel's consistent flouting of international law and commission of war crimes against the people of Gaza,and Palestine at large.

Please will you demand that an emergency debate on these events be scheduled immediately.

http://www.psc.iparl.com/lobby/49 and use our online tool to send an email to Mr Hague. It takes less than two minutes.

You can also cut and paste the email below, and send it to deputy Prime Minister, Nick Clegg at

Israeli naval forces this morning stormed a peaceful flotilla of boats delivering humanitarian aid to Gaza, and killed 20 of the unarmed civilians on board. Dozens more have been injured. Forty British nationals were on the flotilla. None of them have yet been accounted for.

Will the British government continue to maintain its complicit silence over the attack, or will it finally speak out and condemn Israel's piracy and murder on international waters?

You had the opportunity to defend British citizens sailing with the flotilla, and demand safe passage for them and the vital aid they were carrying, but you chose not to do so.

You now have the opportunity to stand up for international law, and to lead the international community in condemning Israel's actions and holding them to account.

I call on you to take this opportunity. Your political and moral obligations lie with those who seek to peacefully deliver aid, not with a country which repeatedly violates international law.