As part of the Week of Action Against the Deportation Machine, a protest was today held at Becket House, one of London's two main immigration reporting centres near London Bridge. The demo was called by No Borders London and supported by other groups, including Fight Racism! Fight Imperialism!, the International Federation of Iraqi Refugees and Stop Deportation. A similar was held earlier in the day at Communications House, London's other main reporting centre in Old Street (see here).

After displaying their banners and placards in the rain, shouting anti-deportation and anti-detention slogans via a loudspeaker and leafleting passers-by, the protesters then walked round the back into the secure compound, where they stayed for a short while among snatch squad vans, until they were 'asked' to leave by the security guards. 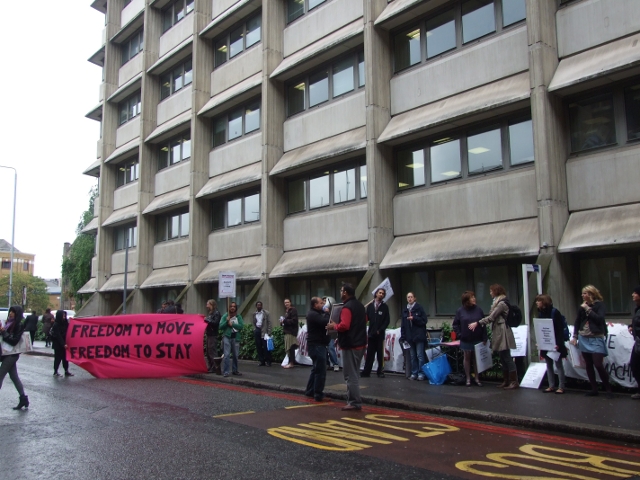 in front of the reporting centre 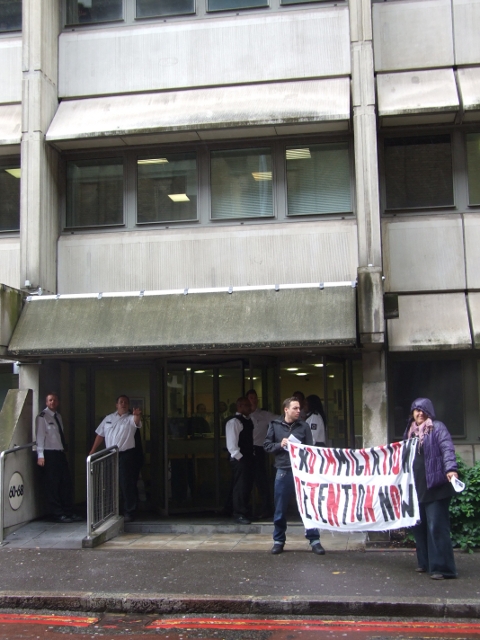 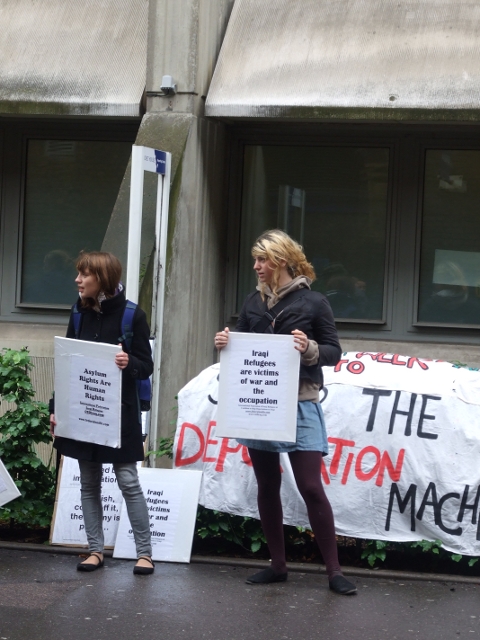 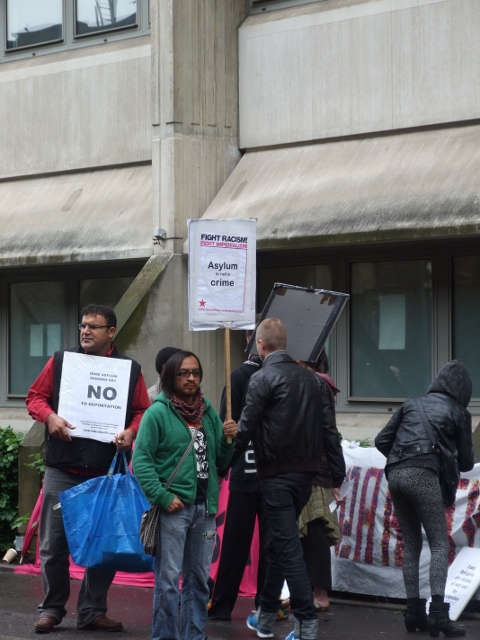 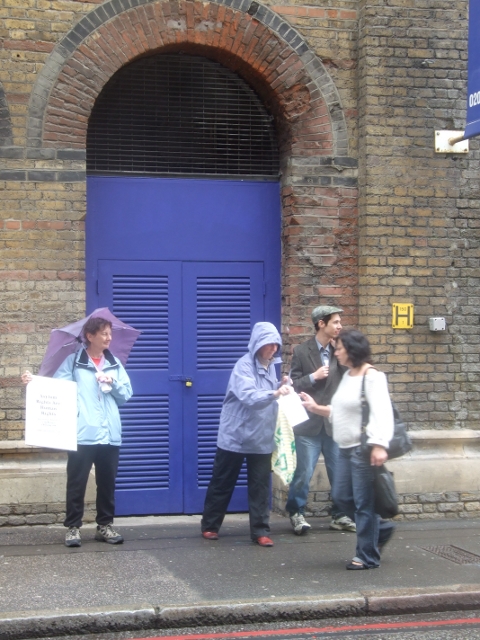 leafleting passers-by on the other side of the road 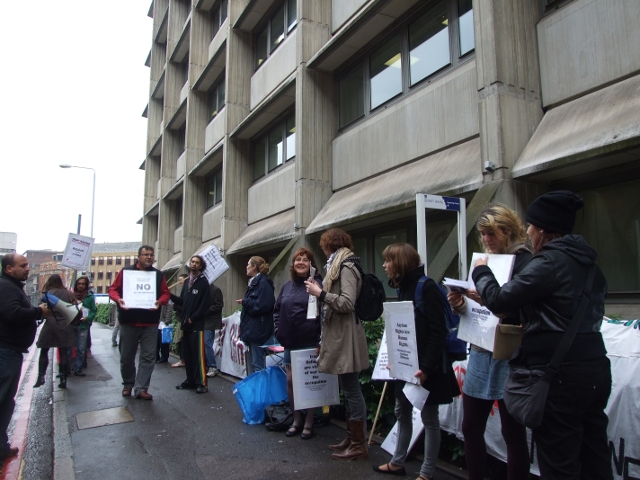 'No borders, no nations, stop deportations' 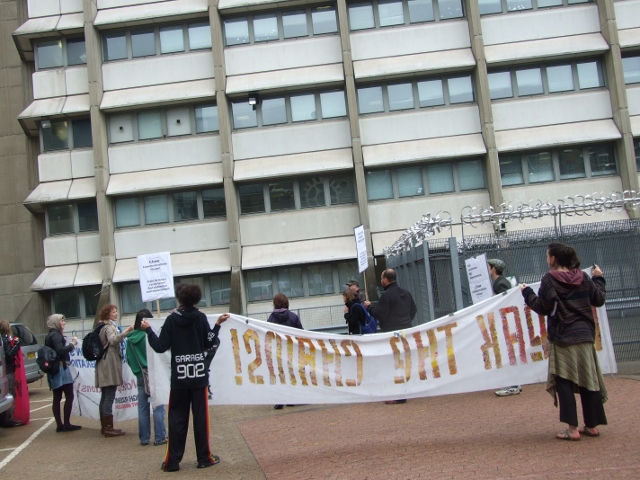 round the back, in the secure compound 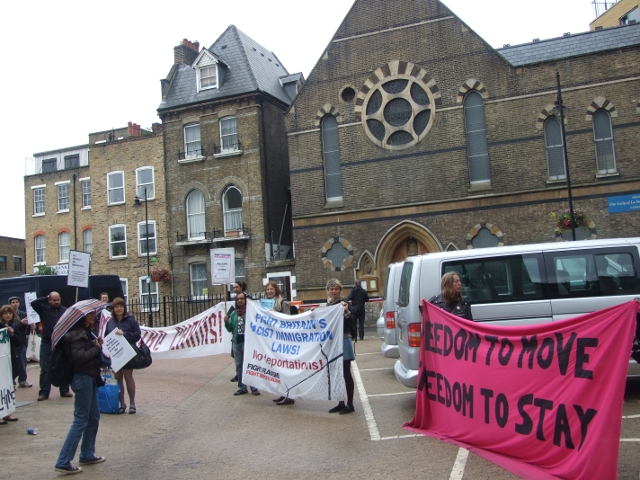 Located near London Bridge, Becket House is the UKBA's immigration reporting centre and 'enforcement unit' base for south east London. It is open five days a week (used to be six) and sees every week hundreds of asylum seekers who are forced to sign on there.

Becket House is provided with a so-called short-term holding facility (STH), which consists of two adjacent secure cells behind the reporting centre. Most people detained in these 'holding rooms' are arrested in the reporting centre while signing on, but a significant proportion are brought in by snatch squads operating from the centre. At least 5-6 blue vans (used by snatch squads in dawn raids, and a couple of G4S detainee escort vans can be seen parked in the secure compound behind the centre during the day.

Those detained are held in the STH for lengthy periods of time, before being transferred to immigration detention centres around the country, such as Yarl's Wood in Bedfordshire, Tinsley House and Brook House at Gatwick airport, and less frequently to Colnbrook near Heathrow. Becket House logs, however, show that detainees are regularly transferred to the nearby police station in the evening because there are 'no available beds' in detention centres.

Detainees in the Becket House STH are not offered a free private phone call or allowed to fax documents to their legal representatives. Furthermore, the reasons for their detention and other relevant information, such the possibility of applying for bail and sources of legal advice, are not provided or fully explained in a language they understand.