A small unit of Iran's troops has entered Kurdistan territory in pursuit of Kurdish rebels in the north of Iraq, officials in Iraq's semi-autonomous Kurdistan region said on Friday. Skip related content 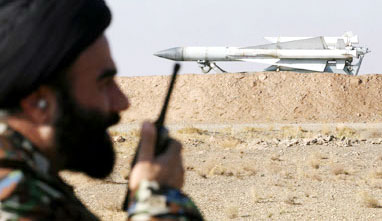 A spokesman for the Kurdish region's security forces, known as peshmerga, said the Iranians had penetrated two km (1.2 miles) into Kurdistan's Arbil province on Thursday with several military vehicles and a tank, and were erecting positions.

"This is a clear violation of Iraqi borders and the Iraqi government has to intervene," said Major-General Jabbar Yawar.

Arbil governor Nawzad Hadi said: "We have informed the head of the (Kurdistan) regional government in order to take the necessary action."

Kurdistan says Iran has been shelling the border region for more than a week, in pursuit of rebels from the Party of Free Life of Kurdistan (PJAK), an offshoot of the Kurdistan Workers Party (PKK) which took up arms in 1984 for an ethnic homeland in southeast Turkey.

Kurdish officials say some 300 families have fled the shelling and one woman has been killed.

Islamic regime considers the PJAK, which seeks autonomy for Kurdish areas in Iran, as a 'terrorist' group.

Like Iraq, Turkey and Syria, Iran has a large Kurdish minority, living mainly in the Islamic Republic's northwest and west.

Kurdistan accused Iran of shelling during a Turkish operation on May 20 in which Turkish warplanes bombed Kurdish rebel targets in northern Iraq.

Iran and Iraq fought a war in the 1980s, but since the ouster of Sunni dictator Saddam Hussein in 2003 relations between the two majority Shi'ite Muslim countries have improved.