The aftermath of Israel’s recent actions clearly demonstrate that the international community is now faced with a mortal threat from this US-Israeli axis – an axis of permanent state of war on the world. 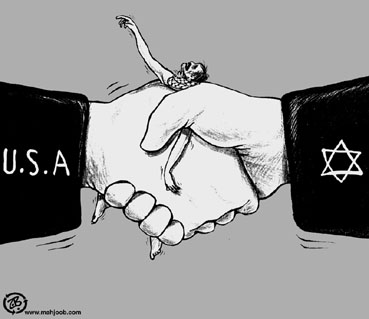 The last member of the international aid convoy, the Rachel Corrie MV, has not made it to its Gaza destination at the scheduled time mid-morning Saturday, according to local media reports.

The ship carrying 1,000 tonnes of humanitarian aid to the besieged Gaza Strip was hours earlier intercepted by Israeli naval forces some 50 kilometres off the coast in Mediterranean international waters. Israeli commandos have apparently blacked out satellite communications onboard the Rachel Corrie in a repeat of similar actions taken on the six other members of the Free Gaza Flotilla on 31 May. It is presumed that the Irish-owned Rachel Corrie is now in Israeli custody.

This second violation of international laws by the Israeli state, involving piracy, armed aggression and abduction of foreign nationals, coming only days after its savage attack on the earlier convoy led by the Turkish-owned Mavi Marmara MV during which at least nine civilians were shot dead and dozens injured, clearly shows that the Israeli state sees itself beyond any legal or moral control. It is a self-justifying autonomous military machine that will fabricate any pretext for its actions, no matter how depraved these actions are. The US government under Barack Obama fits in the same criminal category given its bankrolling of the Israeli state with $3 billion every year, the US refusal to sanction Israeli over its latest international aggression or its illegal and inhumane three-year blockade of Gaza, and given Washington’s own ongoing acts of international aggression and crimes against humanity in at least three other overseas territories: Iraq, Afghanistan and Pakistan.

The aftermath of Israel’s recent actions clearly demonstrate that the international community is now faced with a mortal threat from this US-Israeli axis – an axis of permanent state of war on the world:

Turkish autopsy reports show that nine of the dead were shot up to 30 times at point blank range.

“The Turkish forensic results also showed that a 60-year-old man, Ibrahim Bilgen, was shot four times in the temple, chest, hip and back. Fulkan Dogan, 19, was shot five times in the face, in the back of the head, twice in the leg and once in the back from a distance of less than 45 centimeters,” reports Press TV. [1]

Yet such use of excessive lethal force against civilians continues to be justified by Israeli government leaders and tacitly by Washington.

Hours before the interception of the Rachel Corrie, Israel’s foreign minister Avigdor Lieberman said: “We will stop the ship, and also any other ship that will try to harm Israeli sovereignty.”

Note the ludicrous assertion that an internationally verified humanitarian aid ship is “harming Israeli sovereignty”. Such a mindset is evidently beyond any rational dialogue or supplication.

The same warped mindset is also revealed by media reports that one of the Israeli commandos involved in the raid on the Mavi Marmara, identified only as “Staff Sergeant S”, is to be awarded a medal for valour for his single-handed killing of six civilians.

This multiple violation of international laws by Israel, perversely justified by Israeli leaders with the backing of the US, shows that the world indeed faces an urgent and virulent challenge to peace. This US-Israeli axis must be faced down by the international community and legally held to account. The problem is that the existing international framework under the United Nations is clearly not up to the task. The quarantine and disabling of the US-Israeli war machine will require a new international framework, perhaps headed up members of the growing Non-Aligned Movement, such as Brazil, Turkey and Malaysia. One thing is for sure from the massive outpouring of public anger and indignation across the world, including the US and Europe, such an initiative would have critically important popular support.

* Finian Cunningham is a journalist and musician