The most perilous nuclear arsenal in the world:Israel invites the world torevolt

Over the past 60 years, the racist regime of Israel has been continually scoffing the international community under the cover of "deliberate ambiguity" to develop one of the most perilous nuclear arsenals in the world.

According to the Federation of American Scientists, Israel possesses more than 200 nuclear warheads which are simply adequate to evaporate the whole world in a matter of moments. 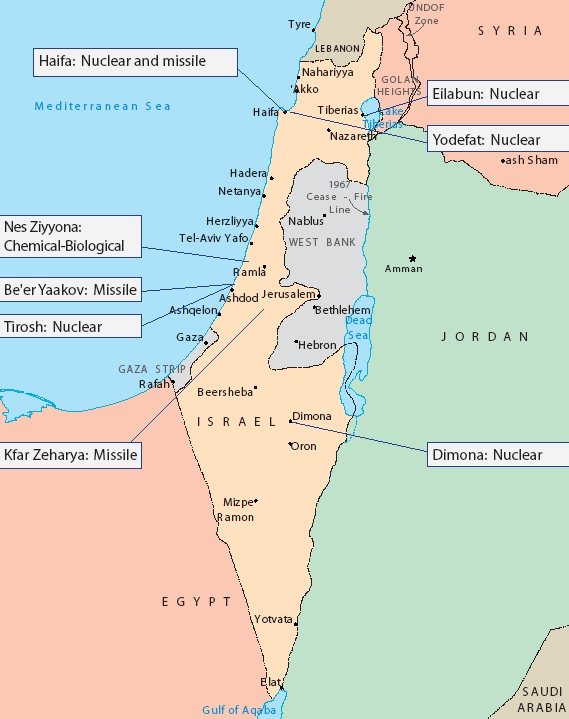 
Over the past 60 years, the racist regime of Israel has been continually scoffing the international community under the cover of "deliberate ambiguity" to develop one of the most perilous nuclear arsenals in the world. According to the Federation of American Scientists, Israel possesses more than 200 nuclear warheads which are simply adequate to evaporate the whole world in a matter of moments.

Israel which is the only possessor of nuclear weapons in the Middle East and one of the three non-signatories to the Nuclear Non-Proliferation Treaty has blatantly rejected the appeal of the 189 signatories of the NPT, including its key ally the United States, to sign up to the treaty and put its nuclear facilities under the comprehensive safeguards of the International Atomic Energy Agency (IAEA).

The 2010 NPT review conference which wrapped up on May 28 in New York and was attended by the representatives from the NPT member states called on the five United Nations Security Council permanent members to move towards eliminating their nuclear arsenals and affirmed the necessity of Israel's joining the treaty and abiding by its international obligations with regards to nuclear non-proliferation.

Zionist officials, however, rejected the appeal and resorted to the excuse that Israel is not signatory to the NPT, so they're not legally obliged to reveal the information related to their nuclear arsenal, nor are they responsible for reducing their atomic weapons, let alone eliminating them whatsoever.

Israel which has been recurrently given impunity from international laws by the United States and enjoyed imperviousness to any kind of legal and judicial responsibility before the international community with regards to its criminal acts of mass murder, ethnic cleansing and collective punishment is now reminding the public opinions of the chauvinistic and mischievous apartheid regime of South Africa which was ruled by the National Party government between 1948 and 1994.

Israeli regime which has killed more than 6,300 Palestinians since the September 2000 and demolished more than 24,000 Palestinian homes since 1967 as a part of its expansionistic policy of extending its borders from the Nile to the Euphrates has been subject to 65 UN resolutions since its establishment which include resolutions that legally obligate Israel to annihilate its nuclear arsenal. The UNSC resolution 487 which was adopted on June 19, 1981 explicitly called "upon Israel urgently to place its nuclear facilities under IAEA safeguards".

On September 23, 1987, 12 IAEA members including Iran submitted a draft resolution to the IAEA General Conference titled "Israeli Nuclear Capabilities and Threat" which demanded that Israel place all its nuclear facilities under IAEA safeguards in compliance with the Security Council Resolution 487 of 1981. It also requested the IAEA director general to consider the implementation of provisions in the UN General Assembly resolutions 41/12 and 41/93 in which Israel was officially asked to legalize its illegal nuclear activities.

In an October 29, 1986 resolution, the UN General Assembly had called upon Israel to urgently place all of its nuclear facilities under the IAEA supervision and commit itself to avoid attacking the nuclear facilities of other countries. This resolution was adopted in support of the UNSC 487 resolution after a squadron of Israeli F-16A jetfighter aircraft bombed and destructed Iraq's Osirak nuclear reactor on June 7, 1981.

Since then, Israel has been recurrently under the pressure of independent nations who couldn't tolerate the double standards of the U.S. and Israel with regards to nuclear non-proliferation. Israel has been asked and demanded a number of times, by various international organizations and IAEA member states, to move towards nuclear disarmament; however, the irrational leaders of the Israeli regime adamantly stuck to their excuse that Israel is not an IAEA signatory and hence would not be necessarily responsible to heed the calls.

Israel's explicit violation of UNSC resolution 487 and its inattentiveness to the final resolution of the NPT 2010 review conference however, has been supported by the United States which has discriminatorily disregarded the demand of the NPT signatories who want a nuclear-free Middle East.

In a statement released last Friday, the U.S. National Security Advisor Gen. James L. Jones unambiguously supported Israel's possession of nuclear weapons: "The United States will not permit a conference or actions that could jeopardize Israel's national security. We will not accept any approach that singles out Israel or sets unrealistic expectations."

The message transmitted by General Jones was clear and unequivocal. Israel's national security is hinged on its ownership of nuclear weapons. Should Israel annihilate its nuclear arsenal, its frail security will be threatened seriously. Expecting that Israel abides by its international obligations is unrealistic, because Israel has never been a realistic regime. Its very foundation was based on imaginary pedestals and its flimsy existence continues to be imaginary. Singling out Israel is not accepted, because a nuclear-free Middle East means the overthrow of Israel's apartheid regime.

The Government of Israel published a statement on Saturday night that transparently exhibited Israel's impunity from any kind of international law: "As a non-signatory state of the NPT, Israel is not obligated by the decisions of this Conference, which has no authority over Israel. Given the distorted nature of this resolution, Israel will not be able to take part in its implementation."

However, the interesting section of the story is that not only will Israel move towards nuclear disarmament, but it has plans to expand its nuclear capability. A 2002 book published by the Carnegie Endowment for International Peace titled "Deadly Arsenals" revealed that Israel is attempting to arm its diesel submarines with nuclear cruise missiles: "Published reports going back to 1998 describe Israel's acquisition of diesel submarines and testing of cruise missiles. Israel "is believed to have deployed" 100 Jericho short-range and medium range missiles that are nuclear capable."

In a September 24, 2009 blog post, the renowned British writer and human rights activists alludes to his country's negligence with regards to Israel's growing nuclear arsenal. He explains that one of his friends working in MI6 has told him that the Israeli nuclear capacity is greater than that of Britain by 2009. Murray then goes on to criticize the British ex-Premier Gordon Brown who never told a single word about Israel's nuclear weapons, but ironically stated that his country would move towards nuclear disarmament: "I am very pleased that Brown has put the UK's nuclear weapons into disarmament talks and has endorsed the goal of eliminating nuclear weapons. But with Israel not a party to any of the treaties, and with Brown and Obama refusing to admit even that the World's fourth largest nuclear arsenal exists, I can only presume they believe that nobody should possess nuclear weapons - except Israel."