The racist, Islamophobic football thugs of the EDL are at the London Metropole Hotel 225 Edgeware Road. They are trying to disrupt an Islamic conference being held in the hotel. Some of them have got into the hotel and others are outside the hotel with makeshift placards. The EDL are violent racists who have rioted in Luton, Stoke, Dudley, Bolton and many other places and have attacked Muslims. 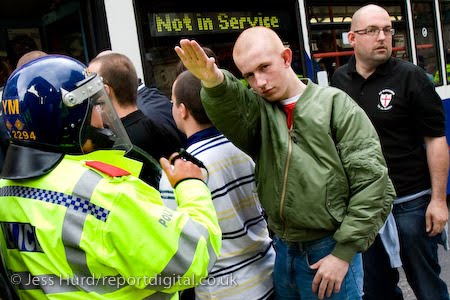 The EDL have been running up Edgeware Road shouting.

Muslims attending the conference have remained calm, dignified and are ignoring the EDL.

Any antifa etc who are not going to East London Mosque and London Muslim
Center [which still needs protecting today] might want to make their way to Edgware Road.

The police are already here.