The English Defence League, a racist, Islamophobic group of thugs have made a you tube video mocking youths in Whitechapel. The video shows the real reason for their trip, provoking Whitechapel locals and causing trouble. They have blamed Asian youths for spreading lies which were in fact spread by EDL supporters via text messages. The EDL attacked local people and were escorted out by police. 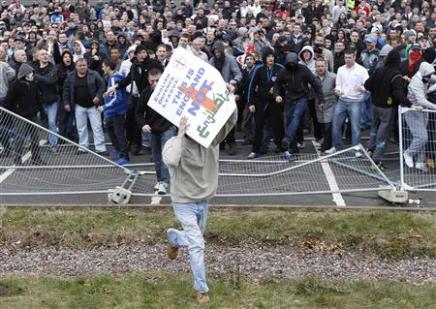 The EDL's friends spread rumours about text messages claiming that "women had been raped and a boy killed by the EDL" and they then blamed these texts for the fact that hundreds of people took to the streets to chase the EDL from the area follwoing EDL attacks in the area that night.
That night the EDL handed out leaflets in Whitechapel that were bound to cause trouble. The EDL racially insulted, abused and threatened Asian youths. The EDL pulled off a Muslim womans' Hijab and terrified her.

The EDL have now made a you tube video mocking local young people and making fun of the people of Whitechapel. It is clear that the EDL are thick.

The EDL now plan to go to Romford in Essex on June 26th and to Dudley on July 17th.