On Tuesday night at 6.07 PM the London brigade of the Greenwash Guerrillas got a call from a panicked pedestrian outside the National Portrait Gallery. It seemed that the prizegiving ceremony for BP Portrait Award was about to start, and toxic greenwash had begun to gush uncontrollably from the gallery’s front doors. 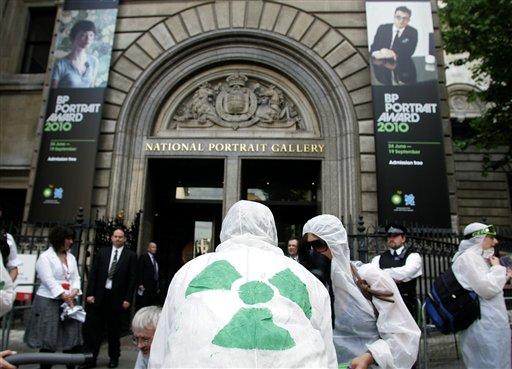 Greenwash Guerrillas at the NPG

Check out a brilliant video here:

Arriving on the scene, armed with the latest in greenwash detecting
equipment and wearing protective biohazard suits, the Guerrillas
immediately identified several sources of the leak. Greenwash levels
appeared to be the strongest anywhere a bright green BP logo was to be
found: from the massive banners fronting either side of the grand
entrance, to the microscopic embroidery on a security guard’s lapel. The
Guerrillas were given the run-around by gallery security and the
Metropolitan police, who escorted Britain’s cultural establishment into
the awards ceremony first at the front, then around the side, then back at
the front entrance again. By 7 PM, everyone had convened at the front
entrance, and the Guerrillas set to work to contain the leak, quarantine
the area, and warn attendees against entering the building.

Many clean-up efforts were tried, from throwing golf balls and old tires
at the leak to trying to plug it with mud, but for some reason the spill
just kept gushing. Meanwhile, some Guerrillas attempted to arm the
attendees – most of whom, inexplicably, were determined to enter the
contaminated building – with information about BP, oil industry
sponsorship of the arts, and the best way to protect themselves from
greenwash.

Despite the best efforts of the Guerrillas, greenwash unfortunately
continues to spew forth from the BP-sponsored National Portrait Gallery
and countless other oil-sponsored arts institutions across London. But
resistance is growing, and this summer might just be remembered as the
tipping point in the campaign to free art from oil.

WHAT'S THE PROBLEM?
BP’s sponsorship of the National Portrait Award is greenwash – a way of
cleaning up BP’s tattered public image and covering up its shocking
environmental and human rights record.

Greenwash is as toxic as oil. With it, BP buys our approval, and hopes
we’ll forget about the gusher in the Gulf, the 300 000 lives already lost
each year due to climate change, and the fact that the company is poised
to enter the Canadian tar sands – the most destructive project on earth.

Every pound the National Portrait Gallery accepts from BP is tainted. In
response to changing public opinion, cultural institutions eventually
decided that it was no longer in their best interests to take money from
the tobacco industry. It’s high time we kicked Big Oil out of our
galleries too.