Climate scientists have expressed that the UK government's emission targets are not radical enough to a criminal for the first time in a Scottish court this week. Vandalism charges have been dropped. Hear it from the defendants in written update and come and support tomorrow! 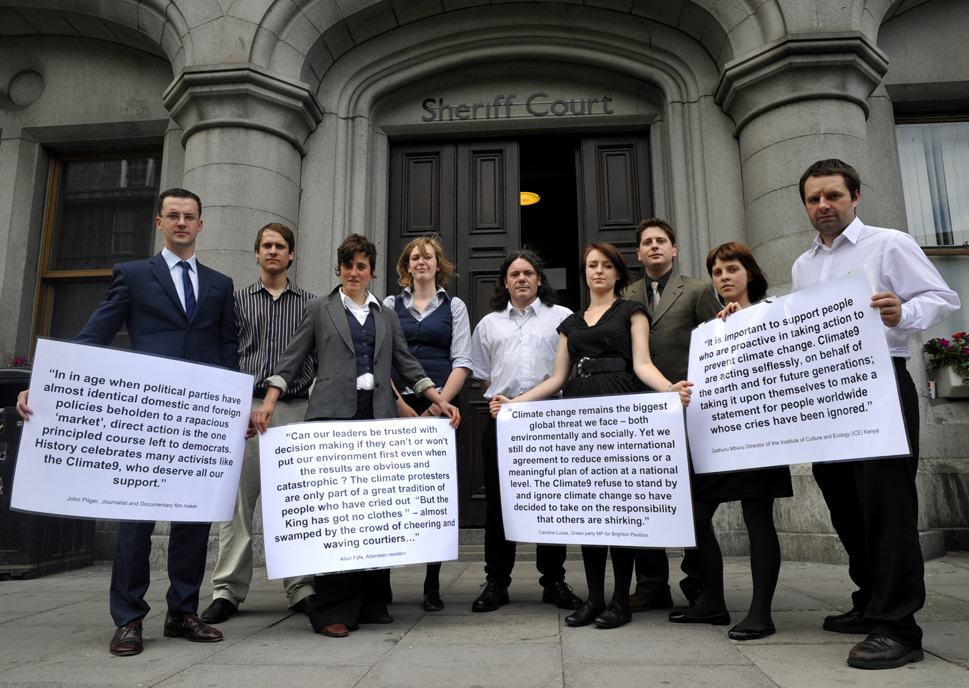 Come down to Aberdeen Sheriff Court on Union St, Aberdeen for 10am to show support. Would be brilliant to see you there!

After 15 months on bail preparing and 9 incredibly intense days in the courtroom it is surreal to be so close to the end. Tomorrow leaves only the Judge’s instructions to the jury and then their deliberations and verdict.

It’s been a roller-coaster ride for the 9 of us, we’ve had some hard decisions to make but also lots of victories along the way. The biggest of which is the strength our group has managed to sustain and the massive support that we’ve received.

The first day was mainly taken up with waiting about and the selection of the jury. It was weird for the 9 of us, most not having spent much time in a court room, getting used to the hierarchies (even down to the different comfort factor of the chairs people get to sit on!) and language used.

The prosecution case took 6 days, some of which was fabulously interesting and some mind numbingly boring. The court heard from police officers, security guards, airport staff and managers including that of the air ambulance service. We saw the video of the action; pictures of the banners and wire fortress; lots of pieces of evidence including plastic golf clubs, home-made golf balls with inscriptions of places effected by climate change like ‘Sipson’ ‘Aberdeen’ and ‘rainforests’ on them and various pieces of golfing clothes.

It was great to see the faces of the jury change as they got a better picture of what the action was and who we are as people. It was stated again and again by the prosecution witnesses that we were “peaceful” and “polite” confounding preconceptions of who would normally be tried by a jury.

Our first big win came in the form of Stephen Wright from GAMA aviation who manages the air ambulance flights at Aberdeen. After all the stresses at the time of the action, and the bad press that followed, it was great to have it confirmed by Wright that the delay to the 'baby flight' “was due to our operational delay by the medics and not the protestors. This incident has had no financial or life threatening or operational impact on our operation.”

However the biggest win of all came from the legal discussions around the relevancy of our witnesses. We won the right to have our climate defence experts heard as our defence. This is the first time in Scotland that a Jury has been allowed to hear a climate defence. AMAZING! On the same day all 9 were acquitted of the vandalism charge due to insufficient evidence.

A real high point of the whole experience and a good reminder of why we were there was when our experts got to speak. Doctor Geoff Meaden spoke first, expert on flooding and sea level rises, talking articulately about the real effects of climate change happening now and the imminent climate catastrophe if we continue as we are. Dr. Meaden also successfully managed to bring the effects of climate change home to Aberdeenshire, speaking about unprecedented flooding frequency near Elgin (at which point the jury were scribbling their notes furiously) Alice Bows spoke next, honestly and convincingly, and made the connection between Aviation and climate change indisputable. Some of her points about the Climate Change Bill's targets were shocking. She told the court that even if we met the climate target of 80% reduction by 2050 we still only have a 50-50 chance of avoiding “dangerous climate change”. Scary but motiving to say the least.

Unfortunately with our defence starting came some massively hard decisions. We all had strong and varying opinions and 9 advocates chewing our ears off too. We had to decide if we were going to call the last two of our climate experts and whether we, as the accused, would speak.

They were both difficult decisions to make as a group but consensus worked for us and allowed us to come out the other side alive and black-eye free. We decided due to logistical reasons and advice from our Advocates that we wouldn't call the last two witnesses Jenny Griffiths and Tim Jones (the judge had already said Patrick Harvey MSP and convener of the climate change committee was not relevant)

However, the hardest decision was definitely about speaking ourselves. We felt torn between wanting to participate in our own trial and explain our motivations and the risks we faced through cross examination. In the end we decided not to stand as witnesses, to keep the focus on the real problem of climate change instead of getting dragged into talking about the technicalities of the alleged offence.

The closing speeches by our advocates took all day today, eclipsing the feeble attempt to criminalise us by the prosecution. They spoke about right to protest, the necessity of civil disobedience, the disproportionate response of the state to our actions and climate change as an indisputable fact in court. The jury seemed interested throughout lets hope they took some of it on board.

The biggest thing that hit us was the dichotomy between the archaic legal system and the reality of why we were there. Sitting in a court room listening to seemingly insignificant legal technicalities when we know the severity of the situation, doesn't make sense. By 2050 it is predicted that 50% of current species on the planet will be extinct due to inability to adapt to rapid climate changes. What a messed up world we live in, and exactly why we must take action now.

It has been a massive learning curve, we hope to pass on the knowledge. Fingers crossed for tomorrow!

CORRECTION: Climate scientists have expressed that the UK government's emission targets are not radical enough to a criminal **jury** for the first time in a Scottish court this week