Call out to Stop Shell in Ireland

Shell are due to start drilling the boreholes in the estuary (Special Area of Conservation) from Monday 28th June until September 2010. Please come over and support the community in their fight to stop Shell destroying this incredible place! 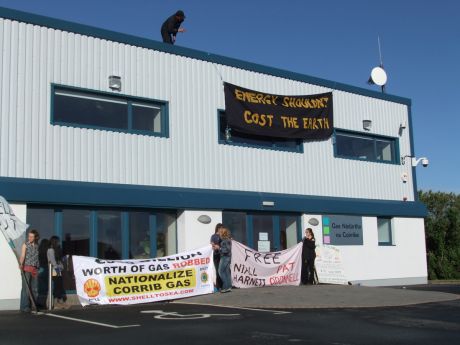 Shell office shut down by protest 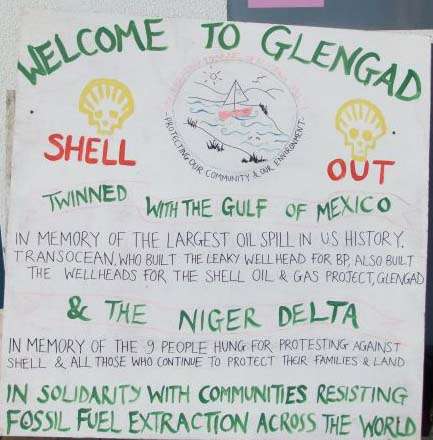 The Summer of Resistance has already begun with campaigners shutting down the Shell office in Belmullet last Thursday. A banner reading “Energy shouldn't cost the earth” was hung from the roof and entrances were blocked. The action closed the offices until the early afternoon. The protest connected the environmental disaster suffered by the fishermen & people of Louisiana with the threat faced by the fishermen and people of Erris. In particular the protest was in solidarity with Pat O'Donnell who has been jailed for his courageous defense of the seas and his livelihood.

Transocean, the company that built the ill-fated Deepwater Horizon oil rig for BP, is also responsible for the Corrib offshore infrastructure. Transocean is currently coming under fierce criticism for lax enforcement of safety standards in the context of very poor regulation – conditions similar to those in Ireland.

Shell to Sea spokesperson Terrence Conway said: “Pat O'Donnell has warned of the dangers posed by pollution from the Corrib Gas Project for many years. Now the consequences of ignoring such warnings is being shown on television screens around the world. By putting profit above safety, the Gulf of Mexico is being destroyed by the recklessness of the oil companies.”

He added: “John Gormley has been as weak as his counterparts in the US. He has made a mockery of the status of Sruwaddacon Bay as a Special Area of Conservation by giving Shell the go-ahead to drill 80 boreholes there.”