A Bangladeshi Muslim shopkeeper was robbed beaten & hospitalised in Whitechapel

A Tower Hamlets community activist was badly beaten, robbed and hospitalised on Wednesday following an England football match by a group of drunken thugs who had been drinking in a pub in Whitechapel Road. Afsar Khan Sadek was so badly beaten he was hospitalised and could not speak. He was then mistreated by the police who seemed to find what happened amusing and who were insensitive. 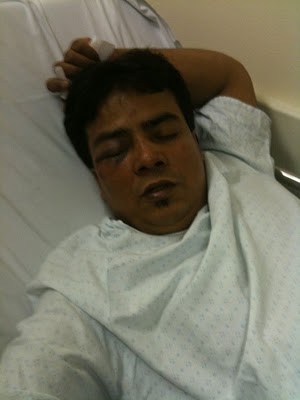 The police have said that no arrests have been made and that they "are satisfied that the racists attack on the Muslim man had nothing to do with EDL incidents ealier in the week".

Today the EDL again went to Whitechapel following a day in Trafalgar Square where they had gone for Armed Forces Day. They were escorted out by police who for some reason had let them go there in the first place.

The EDL went to Trafalgar Square today for Armed Forces Day. They claimed that they were going there to "support the soldiers and that's it". While a number of them were in a pub on Whitehall some who looked underage were not let in to the pub. There was a heavy police presence who had eralier chased the EDL youth wing including Joel Titus down Charing Cross Road where they were chanting [which terrorised nearby Asian shopkkepers], past Trafalgar Square and then to the pub. The youths who were not let in to the pub decided to go to Whitechapel where they went to a pub and where they shouted at and abused members of the local Tower Hamlets community. Police turned up at the pub and escorted the youths out of the area. Again.
Why were the large group of EDL youths who were being followed by police in Central London able to venture into Whitechapel? Why were the lads who look underage [you can see how young they are in the vid] able to get into a Whitechapel pub? Is it not about time that the police or Tower Hamlets council served ASBOs or injunctions on the EDL to stop them going into Whitechapel like this? For how long are the community in the area supposed to put up with this?
There was a FOSIS conference on at the London Muslim Center on the 26th June. The EDL had made noises saying that they wanted to disrupt the conference but this was "unofficial".

This was not called today by people who knew the EDL were in Central London for the simple reason that people were led to believe that the EDL were "going to support the troops and that's it". The fact that it wasn't called is regrettable as the EDL made their way to Whitechapel unhindered. This will not happen again and a lesson has been learned from this mistake.
It seems that the older EDL are selfish and nasty enough to attempt to get underage boys into a pub and when that didn't work they left the bored youths to their own devices. The youths went to Whitechapel to terrorise the community there. The EDL are not a disciplined protest group but a gang of ignorant drunken thugs who don't even care where their younger ones are going or what they are doing. The EDL have made claims that they are against extremism / terrorism and "that's it". If that's true then how can they explain putting a pigs head on a mosque and racially attacking people?
Joel Titus, the EDL youth leader once said that he is against racism and said "if it ever turns out that the EDL are racist he is gone". The EDL have proven BNP links. Blood and Honour and Combat 18 have gone on EDL demos. Why is Joel Titus still with the EDL? His girlfriend Naima is an Asian Muslim yet he stands by and listens to EDL supporters verbally attack people they describe as "the Muslims". This shows that the EDL rank and file are against all Muslims and that the EDL movement is not about "defending all of us against extremism" but is about something else. The EDL chant "We want our country back", "Allah is a peado", "Allah, Allah who the fuck is Allah" and other stupid things on the EDL "protests".
The EDL, defending the country from extremism? The EDL can't look after their own kids and Joel doesn't defend his own Asian Muslim girlfriend when his EDL mates make derogatory comments about Muslims.

The EDL said today that they are against pro Palestine protesters. Palestine has nothing to do with Islam4UK etc.....the EDL is however funded by Zionist Alan Lake.

We've had enough of the EDL.

Time to be honest

People actively concerned about EDL should not be confused. EDL are a state-backed force.

The first clue is that they have a mixed race person and a non-Muslim Asian as spokespeople. This is to give the impression that it is not against all black and Asian people, just Muslims. But which black or Asian would join a group that is clearly racist. Are we supposed to believe that they are more worried about Muslims than white racists? The idea may make sense to duped white people, but most black people would find that bizarre.

Most of the EDL are made up of football hooligans and soldiers. Some, no doubt, are also criminals. There has been a lot of police intelligence work directed at hooligans. Soldiers are clearly subject to state influence. The BNP has long been under the control of the secret state. The state can also blackmail criminals.

Many white people may go along with Islamophobia but are they really willing to get involved with a group like the EDL? Like Islam4UK, they are not a natural outgrowth of their populations.

Both the EDLs and Islam4UK are state back forces whose aim is to set the population against one another rather than focus on the elite who are ripping us off. It is about time that activists publicly acknowledged this.

Any racism the other from 'muslims' does not get reported. This may well be a racist attack but I see other racism in Whitechapel will not be reported if it doesn't fit into the simple scheme of tabloid politics. BTW. It could be argued that No Borders is a state backed too as it appears to follow the tactics recommendesd by the IMF and Ian Duncan Smith in his latest role ( quoting the pro migration policies of the IIMF and PPP/PFI would be proud:- A cheap mobile workforce where any poor local people may be forced to vacate their homes ( believe it ). Though housing and land rights doesn't really affect the midle class International lifestylist activist though and their poverty pimp mates in the housing/homeless/eco charity sector ). It costs to travel. BTW the comment reminded me of an article that appeared in The Nation at the same week as one appeared in the Dail Mail. re jobs in the NHS. The Nation accssed the NHS of racist hiring policy for not training a young black man as doctor as he had a record and the Daily Mail was upset that a poor white girl could not be trained up as a nurse as she had a record for shoplifting. This article did not mention race. Intersting points of view. Some play the race card when it is about cash, power and policing and getting cheap labour . The undermining of the rehabilitaiton of offenders act with catchall databases ( on the grounds of catching paedophiles ) has effectively cminialised many poor underclass english of various ethnic roots. A mobile workforce shoehorned onto the island will undermine many attempts at resistance ( in this centre of capitlism with a dispossesed class ) particuarly as many international people are being recruited into the policing sectors from administration jobs to the police force to bailiffs to organised crime ( which helps prop up cash liquidity through drugs and property ). It is a good excuse to deskill the local population though skilled peope re being forced into unemployement anyway whatever your bullshit stats say ( as thaey are from pro market comapnies that are effectively running the country banks and government - they are Deloitte Touche, KPMG, Price Waterhouse Coopers, Serco and a few others. Do some research....

Racists have been focusing on Whitechapel

The intellectualising of this isn't much use or help to a victim of racism and yes, possibly state sanctioned Islamophobic violence who has been hospitalised and is in so much pain he cannot eat or speak.
As for the sly remark about "muslims" in inverted commas posting articles perhaps the hoax that is the Unity Platform Against Racism and Fascism needs looking into. Nearly all of the [typed] signatures on it were faked.

inside job, collecting references to the sate backing for the edl would help make it clear to activists, some was posted here:

do you have any sources to cite?