Having had the privilege of speaking with Tom Sullivan, an actual explosive-charge placement technician, we have some new insights to pass along as to how controlled demolition works, where it started, and the effect that 9/11 had on the demolition industry. Sullivan gained his experience as an employee of the leading firm in this field, Controlled Demolition, Inc. (CDI)

http://www.controlled-demolition.com/ . Sullivan stresses though “I do not in anyway represent CDI and what I have to say is based on my own experience and training,” 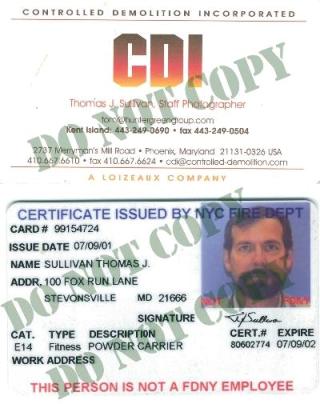 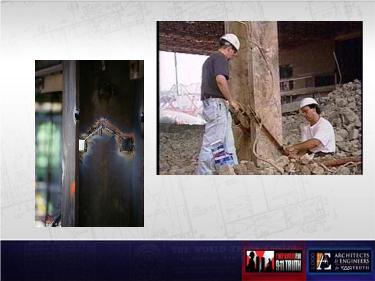 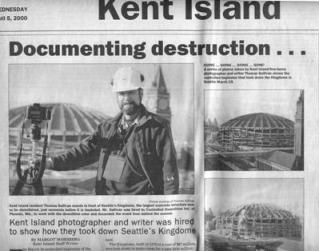 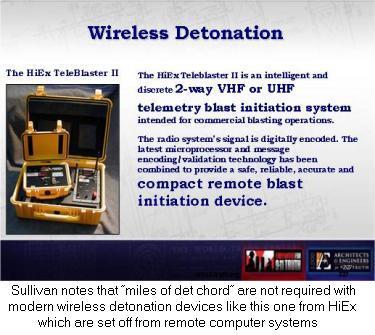 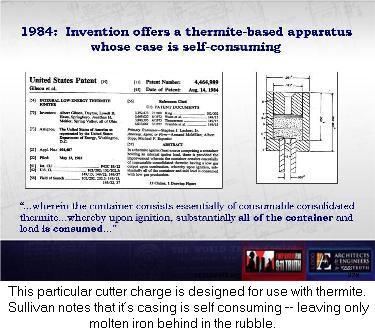 Sullivan attended high school with Doug Loizeaux of the Loizeaux family. The Loizeaux family, through the father Jack, independently started the whole controlled-demolition industry and turned it into a highly profitable business. Sullivan, before he became connected to CDI, was an independent photographer during his early years in Maryland. He would be sent to CD sites and take still pictures of the jobs. He became infatuated with the CD industry. The time came when he would do both, being the placer of the “cutter charges” on the primary joints, and photographing the jobs for promoting the business. Soon he would switch to full-time employee status of CDI -- as verified by AE911Truth’s verification team

"It was very interesting, but also very hard work, long hours, especially in the cold weather," Sullivan reflects. He stated that the days began early, around 6 a.m., and they would work until the sun was down. Sullivan had the experience of preparing a building by placing the cutter charges throughout the primary joints, and then, of course, watching it all come down.

Sullivan notes that many weeks are required to “prep,” or weaken the buildings before demolitions. Steel frame buildings don’t just fall into their footprints at free-fall without major work throughout the building – even some before the placement of explosives. Sullivan emphasized as an aside, “Fire cannot bring down steel-framed high rises -- period.”

One of Sullivan’s most exciting jobs was the colossal Kingdome

http://www2.ae911truth.org/images/infoitems/Sullivan_CDI_W2.jpg was, Sullivan stated, “a very unique experience.” He also said, "they were a close-knit family -- referring to the familial values of the Loizeauxs." “I learned from watching," said Sullivan. "There is no school that will teach you this, just hands on hard work." Sullivan took hundreds of project photos, through which he developed a deep passion for the trade.

When asked, what made CDI the best in the business, he commented, “their family had all the experience because they ’invented’ the art of CD. They spent years traveling around the world, showing and educating people how this art form works.”

Unfortunately, the business came to a screeching halt after 9/11. "People were scared -- if they were to hear a loud bang it was probably some kind of terrorist attack," says Sullivan in frustration. "Fear took over and there was no more business." Even Mark Loizeaux (CDI’s President) has been quoted as saying 9/11 ruined him. Sullivan had no choice but to leave CDI. Curiously, CDI had a role in the WTC cleanup through a subcontract under Tully Construction. On September 22, 2001, CDI submitted a 25-page "preliminary" document to New York City's Department of Design and Construction, a plan related to the removal and recycling of the steel.[¹]

Sullivan stated that he knew from the first day that the destruction of World Trade Center Building 7 on 9/11 was a classic controlled implosion. Asked how he thought it might have been done he posited, “looking at the building it wouldn’t be a problem -- once you gain access to the elevator shafts…then a team of expert loaders would have hidden access to the core columns and beams. The rest can be accomplished with just the right kind of explosives for the job. Thermite can be used as well.”

Brent Blanchard, the photographer from the controlled demolition company Protec, has said, in criticism of the CD theory, that there would have had to been detonation cords strung all over the place and casings left in the rubble pile from the cutter charges. So we asked for a response from Sullivan. He noted that:

"Remote wireless detonators have been available for years. Look at any action movie -- and of course the military has them. The reason most contractors don’t use them is that they are too expensive -- but in a project with a huge budget it would be no problem. As for the casings -- everyone in the industry, including Blanchard, would know that RDX explosive cutter charges are completely consumed when they go off -- nothing is left. And in the case of Thermite cutter charges, that may also be the case. Thermite self-consuming cutter charge casings have been around since first patented back in 1984."

We asked Sullivan if all the floors in WTC 7 would have to be loaded with explosives in order for a successful controlled demolition. He responded,

"No, with steel framed buildings you really need only to load the bottom third to bring the building down. While at CDI we had a job in Hartford Conn, the CNG building, where we did just that. And it worked out beautifully."

Recalling that Ron Craig, a Hollywood movie explosions expert claimed in a debate with us, that there would have been many blocks of broken windows if it were a controlled demolition. Sullivan reflected,

"The key word here is controlled demolition – in other words careful placement of charges -- always focused and precise. We are not talking about setting off a bomb here. The amount and type of explosives is an art and collateral damage can often be completely avoided."

We asked about Shyam Sunder, the lead investigator of NIST (National Institute of Standards and Technology) who claimed publically in his infamous press conference at the “unveiling” of the Final Report on the Collapse of World Trade Center Building 7

http://wtc.nist.gov/media/NIST_NCSTAR_1A_for_public_comment.pdf that there would have been a loud boom coming from a massive explosion if this had been a controlled demolition, and asked him about that. Sullivan said, “With any implosion there is never just one big explosion but rather waves of smaller explosions -- not unlike the percussion section in a symphony -- as each loaded floor is progressively set off.”

And as Sullivan watched the towers collapse that day, like so many did, he pondered at how fast it all took place, and how suddenly and symmetrically they were brought down. "I knew it was an explosive event as soon as I saw it, there was no question in my mind," said Sullivan. Most of us agree -- it's not by chance that the first tower just happened to collapse -- then the second in the same manner. What convinced him completely is when he watched Tower 7 fall that day, "I mean, come on, it was complete destruction. I've seen buildings fall like that for years -- that was the end game for me." Keep in mind that Sullivan did this for a living for several years -- it is like second nature for him to see this type of demolition. If anybody would know, it should be him. But we went ahead and asked him, “Is there any chance that normal office fires (the official cause of the ’collapse’) could have been responsible for the smooth, symmetrical, free-fall acceleration of building 7? “Not a chance,” he retorted. We just wanted to be sure.

When we asked him if he followed any of the 9/11 Commission hearings or that of the NIST reporting, he had the same answer for both "I have no tolerance for people who lie to me about what I know to be true. I threw my hands up in disgust and never watched another hearing after the first. As for NIST, I didn't even watch because I knew what to expect." He did however follow the final report on the collapse of Tower 7 and said it angered him that they could actually convince so many of their fraudulent claims.

Sullivan first came into contact with AE911Truth through a friend that sent him the 9/11: Blueprint for Truth DVD

http://video.google.com/videoplay?docid=-4617650616903609314 . He watched it and was very excited that there was actually an organization out there trying to inform people of what he was trying to say since that fateful day. “AE911Truth is the most focused and organized group there is today in the 9/11 truth movement. There is no speculation," he said. "Blueprint for Truth is factual and impressive information based on science and physics, and was clear and concise." When asked if he agreed with the evidence the DVD brings forth, Sullivan responded, "It contains extremely compelling evidence."

The final question we asked in this interview was, "How many architects and engineers does it take speaking in unison until people hear that there is a problem?" His response, "As the number grows it will be harder and harder to deny them -- but deny them they will."

Note: 1) Sullivan came out from the East Coast to deliver a short but electrifying presentation on Friday and Saturday night, May 7th & 8th

http://www.ustream.tv/recorded/6786531 at the joint presentation of Architects & Engineers for 9/11 Truth and Firefighters for 9/11 Truth. He joined Richard Gage, AIA, and Erik Lawyer on stage for 10 minutes and answered some key questions about the demolition industry, the CDI family of Loizeauxs, and the way the 3 WTC skyscrapers were destroyed. Prior to these milestone events he appeared with Gage and Lawyer on KPFA radio Berkeley on the program “Guns & Butter” with host Bonnie Faulkner who had a number of great questions for him

2) "DO NOT COPY" watermarks on images were added by Tom Sullivan. These images may not be copied other than in the context of this article, or with his specific approval.