The EDL hijack the British Armed Forces home-coming parades throughout the whole of the United Kingdom, latching onto official mayoral welcomes, marching down streets cans and bottles in hand, deluded into believing that all the councillors, the town and city mayors, the soldiers and their friends and families who turn out are giving their tactit approval for everything the neo-Nazi rabble stand for. 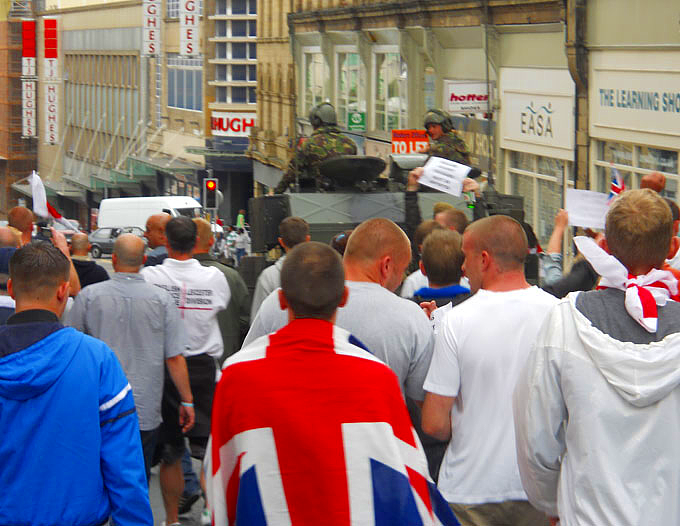 Over the last week, the EDL has been doing its best to politicise the British Army, knowing full well that by latching-on to the soldiers parades they are putting the lives of the soldiers at a much greater risk in war zones such as Afganistan.

Many Afganis claim the war claim that it is unjust, and accuse foreign governments including America and Britain as being imperialist Islamophobes who are using racism to attack their people. Every time friendly fire results in another needless civilian casualty, the leaders of the Taliban use the incident to recruit affected people to their cause.

Up and down the country, flying EDL flags while gooseetepping alongside serving soldiers, while army commanders and the police stand idly-by, the EDL have succeeded in bringing shame to each and every soldier attending these parades.

While the leaders of the British Armed Forces have repeatedly claimed that they have no truck with Islamophobia or any other form of racism, they have stood by and allowed their forces to be sullied with association with the fascist street-fighting organisation led by Chris Renton and Stephen Yaxley-Lennon, (both long-standing BNP members).

If the association between troops, veterans and the EDL is allowed to escalate, and this association becomes renowned behaviour, and the world of this becomes worldwide, more and more ordinary Afganis will daily view Britain's involvement in Afganistan as a religious crusade, fuelling fervour which will ultimately result in more roadside bombs, and more British casualties.

The main aim of the EDL is to cause the mother of all race riots in Bradford, destroying the city, which will be inevitable if they are allowed to invade a city still struggling from the tragic BNP/NF incited race riots of 2001, however in recent weeks, the EDL have recently discovered that it is easy to infiltrate British Army and Remembrance events, singing Rule Brittania, making stiff-armed salutes, and claiming moral attachment to every other person at these events.

The EDL's stategists claim that they are hijacking return and rememberance events to make themselves seem more palatable to the public, even though slurpimg from bottles of Carling on public highways and shouting racist abuse to passing Asian people, is hardly militaristically controlled behaviour. Latching on to the army's activities is seen as a public relations exercise, as you can see from a post from the offical EDL facebook group (see screenshot).

Bradford is still going to happen, and it will result in the end of EDL as well as the death of the city, (plus life sentences for murder) however until "Bradford's World War III" (according to EDL on YouTube) happens, the far right organisation have changed tack, organising more and more flash-mob-style "turn up and pretend we are British Army Soldiers" events in smaller numbers that are harder to predict, using "closed units" organised Combat 18-style (for instance Casuals United Leeds (Leeds Service Crew/BPP remnants), which can be mobilised secretly and at much shorter notice.

The EDL do not give a flying fuck about the international ramifications of hijacking the British Army (by association) to turn it into an Islamophobic crusade, unconcerned at how many more roadside bombs will be planted as a result of making British Forces universally known as sympathetic towards racism and neo-Nazism, and how many more British servicemen and women will die as a result of their actions.

(See the following link for how the EDL took over Armed Forces Week Halifax in West Yorkshire: -

The pub featured is the Courtyard in Wards End, a venue whilch tolerates EDL and BNP, and the local authority-owned Piece Hall in Halifax allowed EDL flags to be draped over council property)

Unless the leaders of the British Armed Forces publically speak out against the EDL, this paramilitary private army of drunken racist thugs has the potential to politicise and religiously-charge every maneouvre that British forces conduct around the world.

If it is officially unacceptible for serving soldiers to be BNP members, the same public stance must be taken against the EDL's foolish hijacking of our armed forces, before it is too late!