Report: 26 June Demo in Solidarity with Victims of Extraordinary Rendition

On a hot Saturday afternoon at the end of June, as the British media and government sought to use British troops as a weapon on the home front to defend their senseless warmongering in faraway lands on Armed Forces Day, the London Guantánamo Campaign took a stand against the indefensible and marked a far more poignant anniversary with a demonstration in solidarity with victims of extraordinary rendition outside the US Embassy in Mayfair on UN International Day in Support of Victims of Torture. 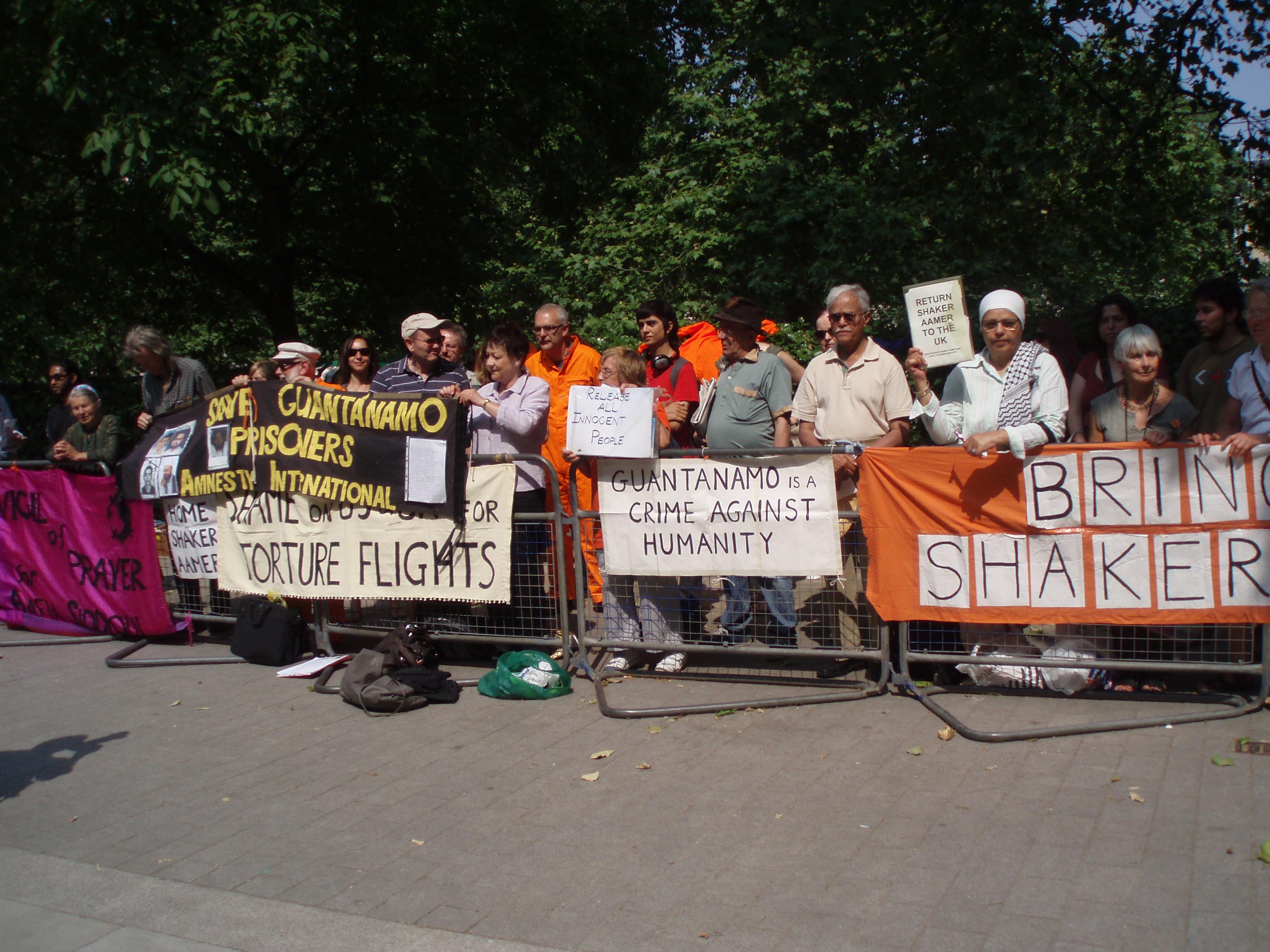 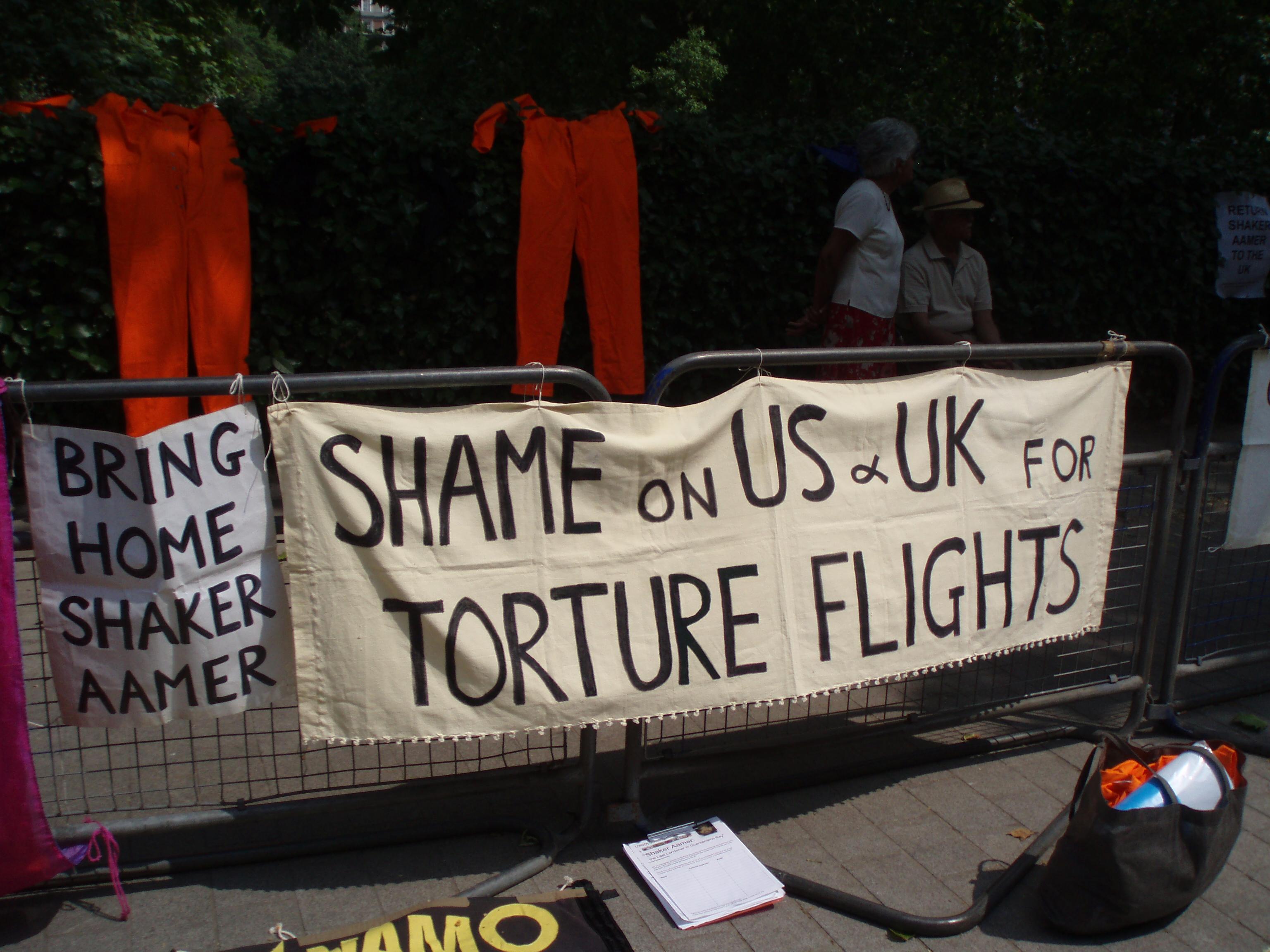 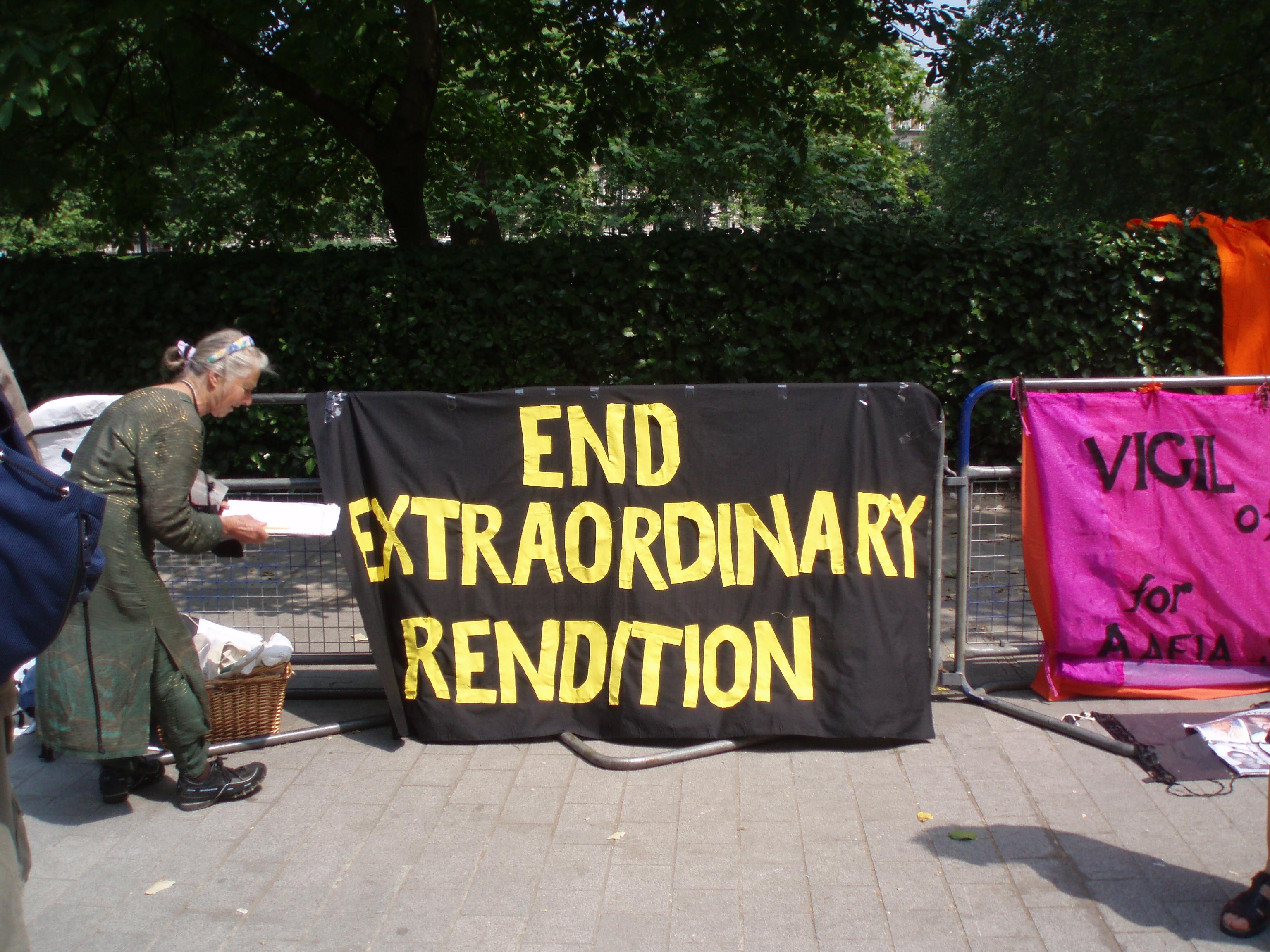 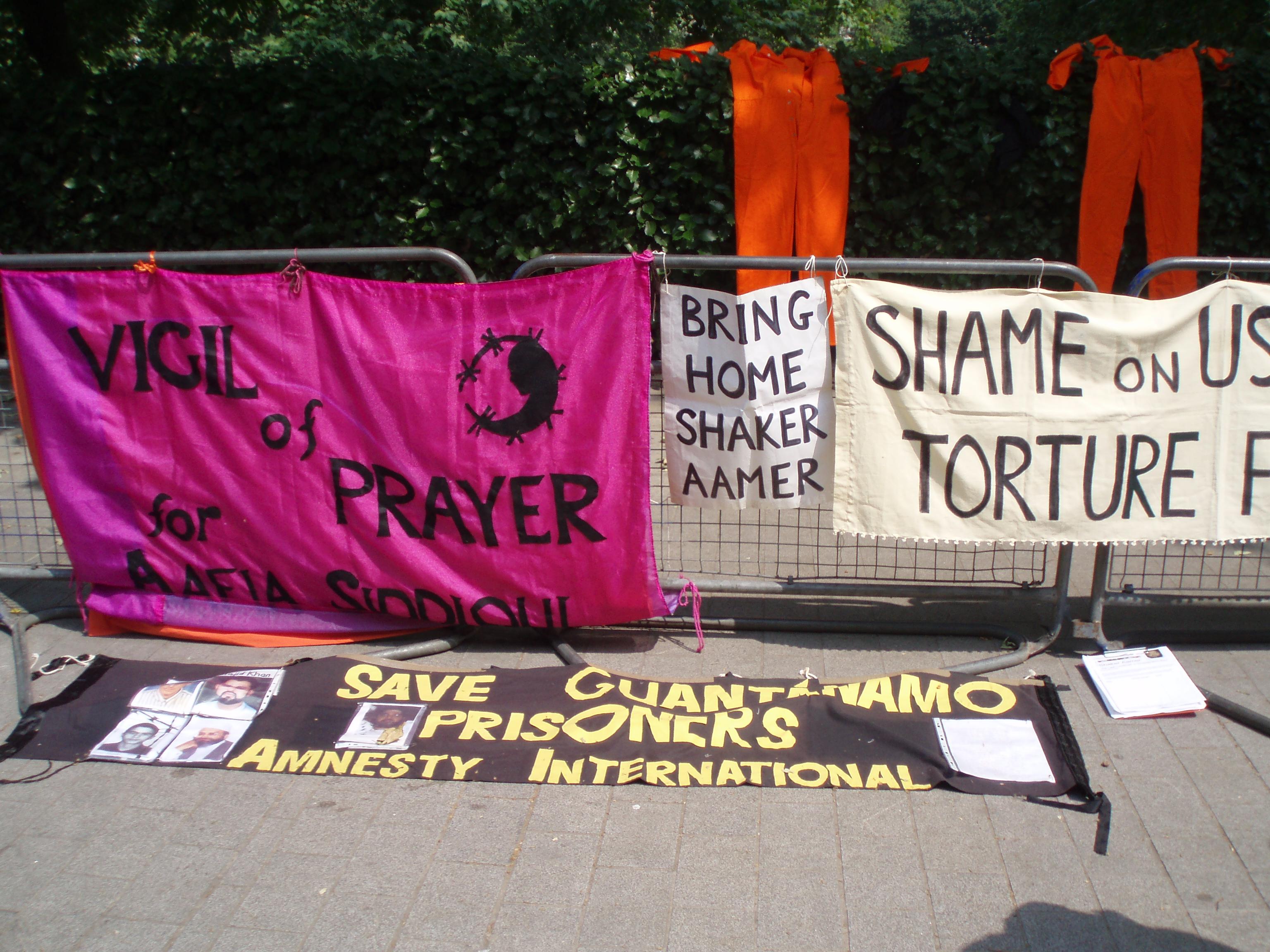 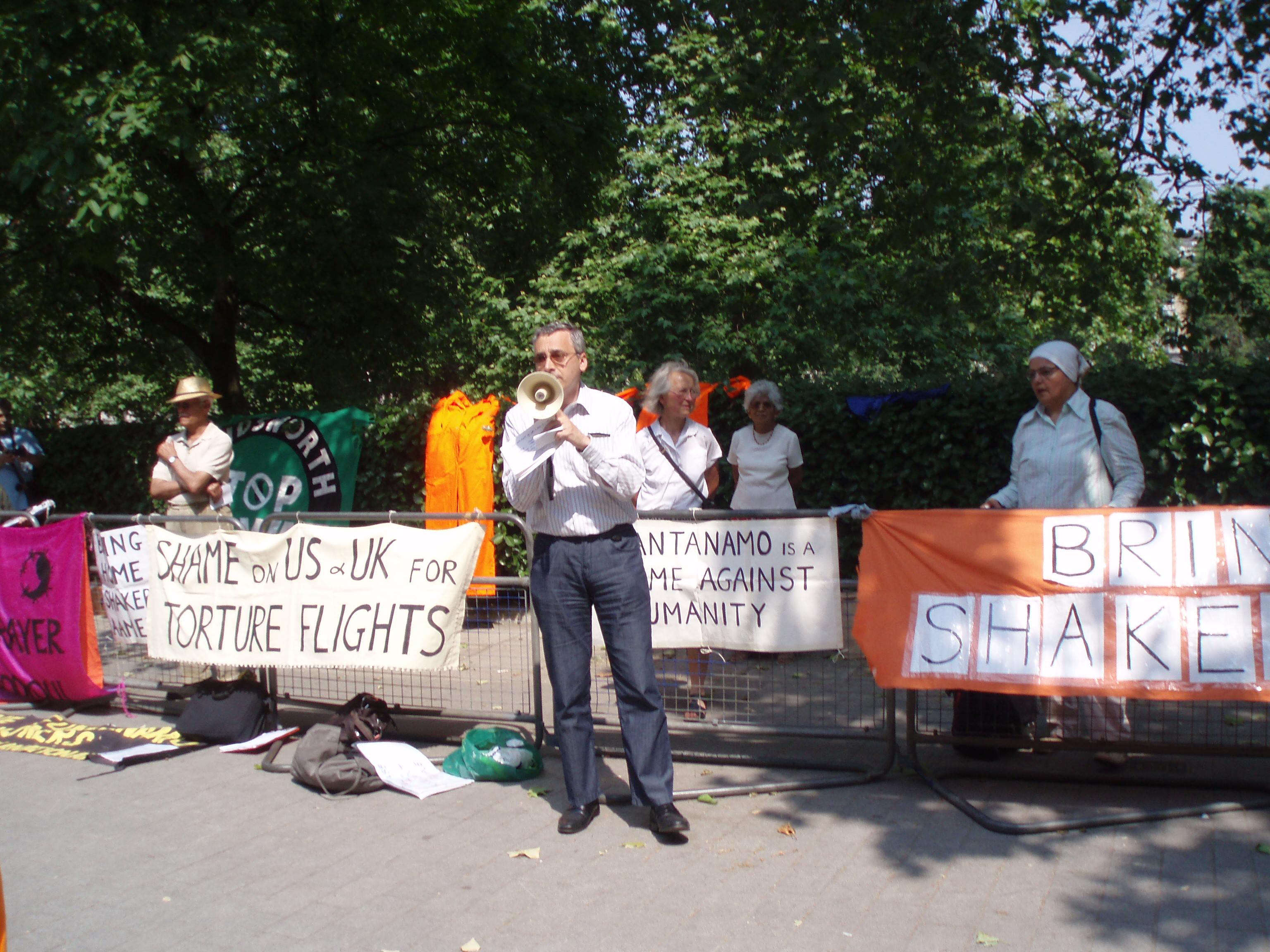 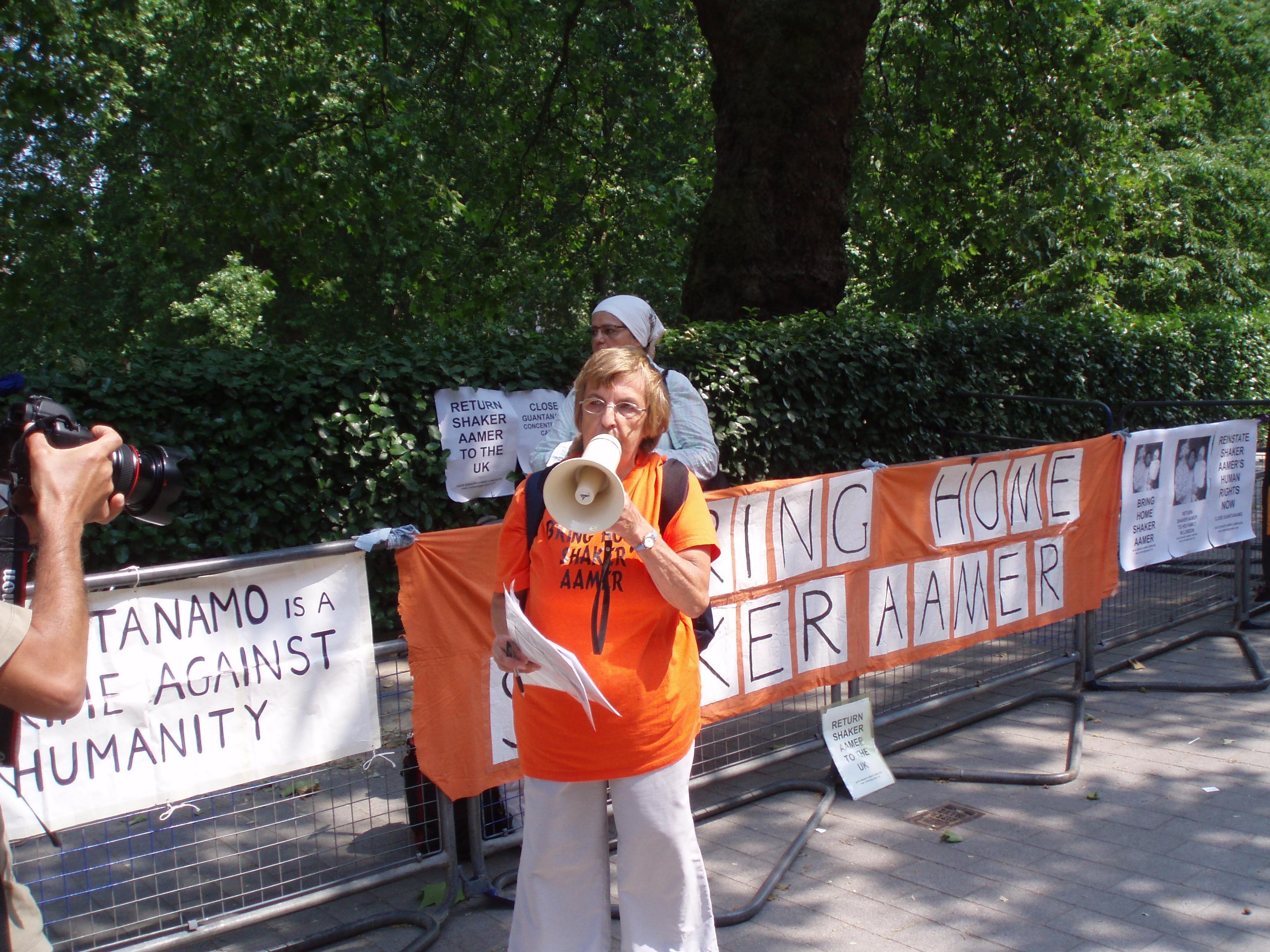 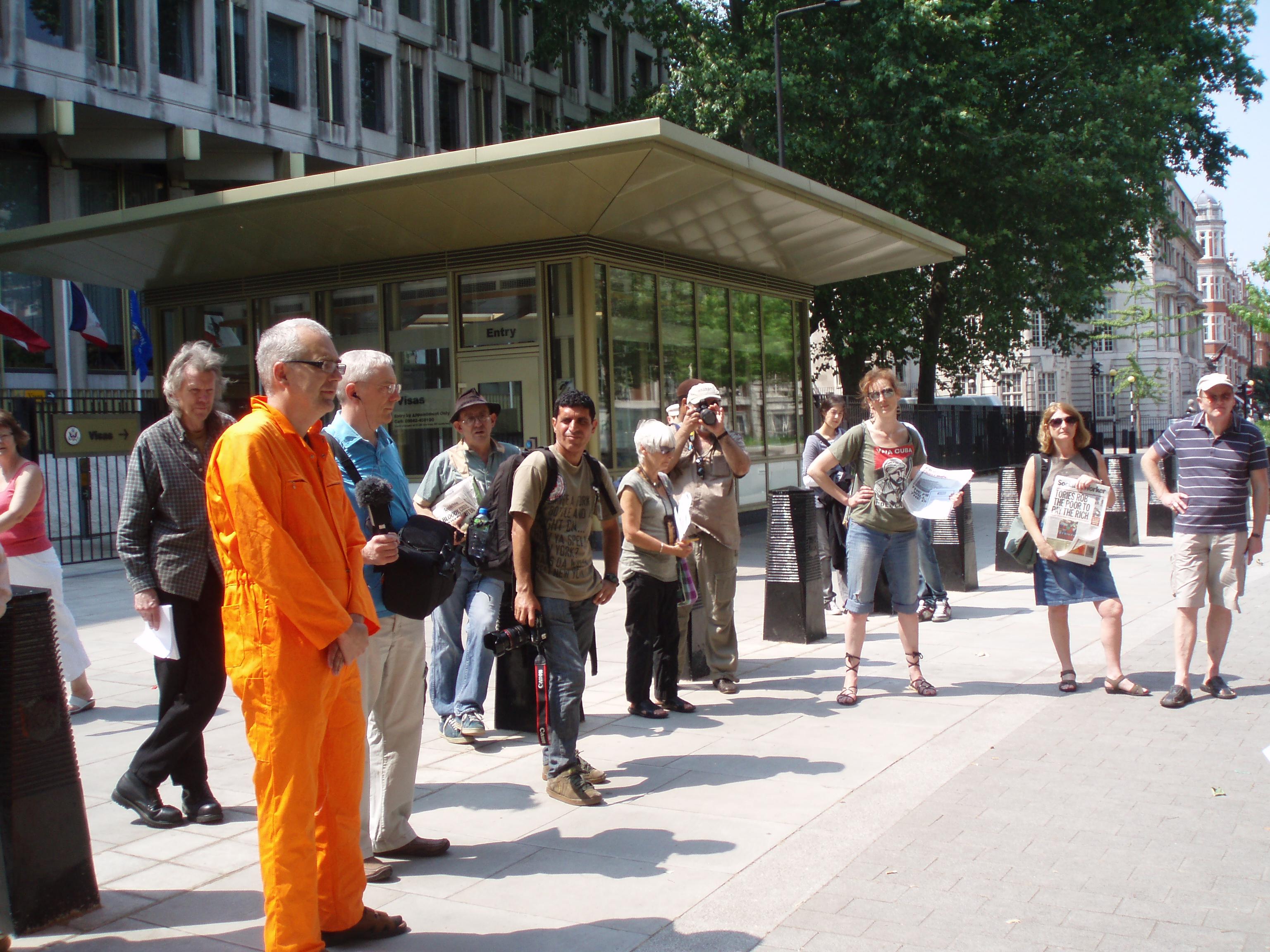 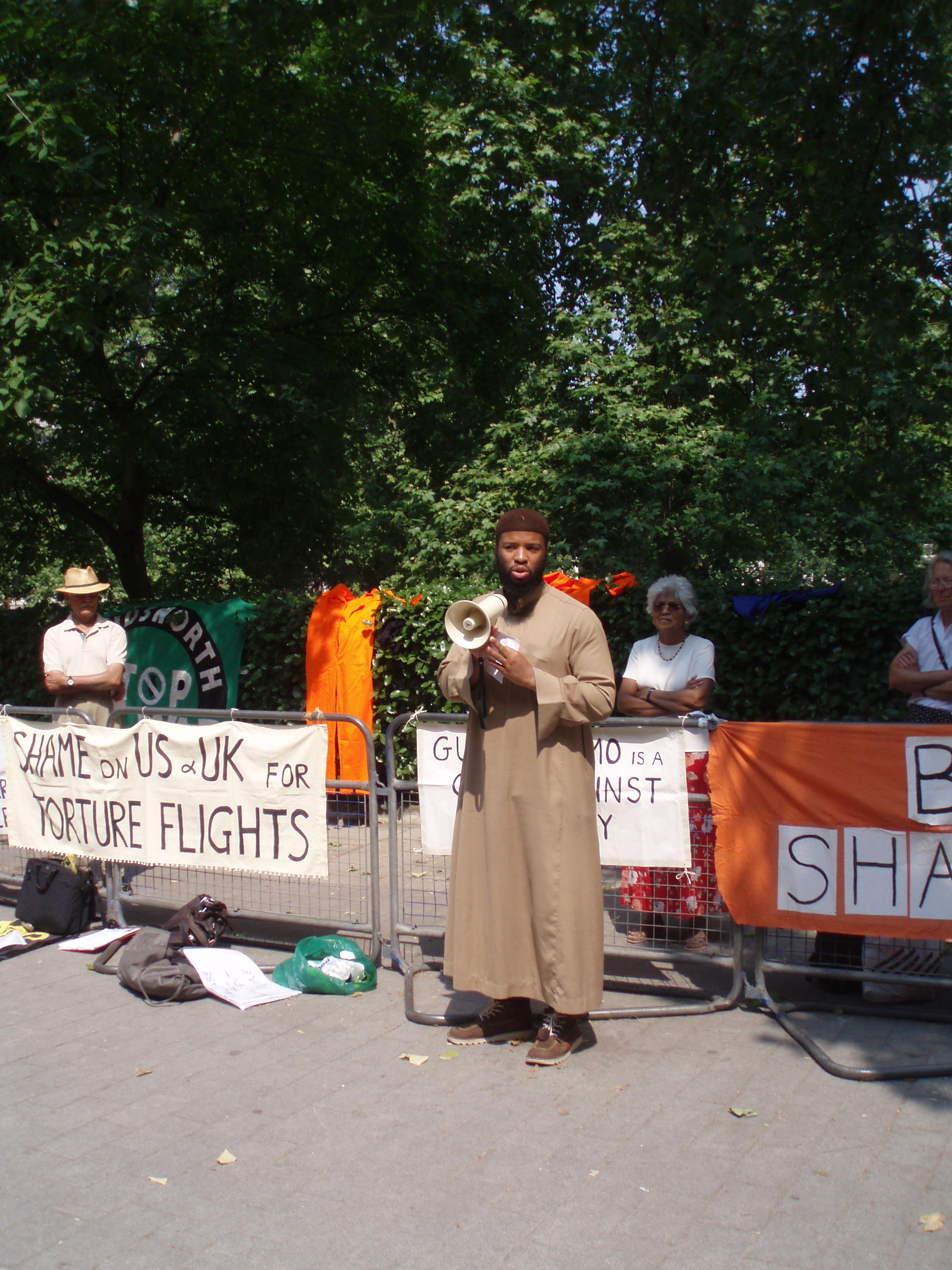 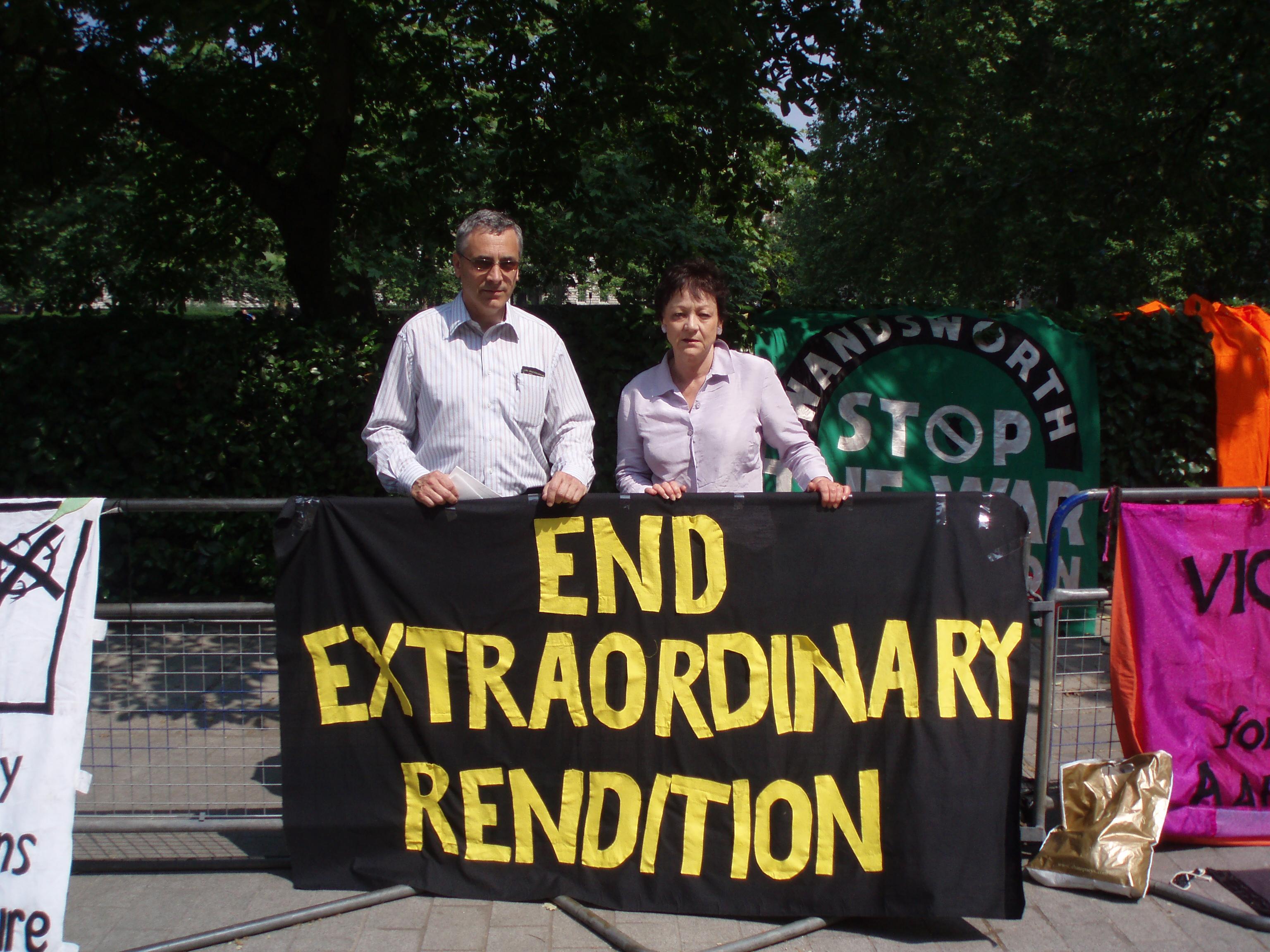 On a hot Saturday afternoon at the end of June, as the British media and government sought to use British troops as a weapon on the home front to defend their senseless warmongering in faraway lands on Armed Forces Day, the London Guantánamo Campaign took a stand against the indefensible and marked a far more poignant anniversary with a demonstration in solidarity with victims of extraordinary rendition outside the US Embassy in Mayfair on UN International Day in Support of Victims of Torture.

To mark this day, and to show solidarity with victims of a particularly pernicious facet of torture in our times – extraordinary rendition - the London Guantánamo Campaign (LGC) held a demonstration outside the US Embassy in Mayfair, London, on the afternoon of Saturday 26 June. The LGC is calling on the American government to outlaw its extraordinary rendition programme and on governments all around the world to end the use of torture. Around 70 people attended. Led by David Harrold from the LGC, he stated that “freedom, justice and peace in the world” were some of the founding principles of the United Nations, of which we see little around us these days. Demonstrators had come together on this day to mark and expose the continuing horror of the “disappearances” of prisoners and the use of enhanced interrogation techniques by the US. The abuse meted out is not visible as it has been driven down into the black hole of places like Bagram and other illegal prisons. The US wants information about extraordinary rendition to be kept in the dark but it is up to activists and concerned individuals to “shine a light” on the broken promises, laws and lies of the Obama administration, in the words of the American NGO Witness Against Torture. Mr. Harrold also emphasised the human factor and the personal suffering involved.

Picking up on this last point, Joy Hurcombe from Brighton Against Guantánamo and the Save Shaker Aamer Campaign spoke about the case of Shaker Aamer, a Saudi national with a British family in south London, who was rendered to Guantánamo Bay, where he has been held without charge or trial for the past eight and a half years. She said that the world had changed on 9/11 – for those who were victims of the extralegal processes that ensued. Men like Mr. Aamer were kidnapped, sold for a bounty and tortured before being rendered elsewhere. Shaker Aamer was kidnapped by the Northern Alliance, sold to the US military, tortured at Kandahar before being rendered on to Guantánamo Bay. He has also been beaten and abused at Guantánamo Bay, particularly for standing up for prisoners and their rights. He was held in solitary confinement for years. The British government must act to bring him home. Doctors and lawyers are also guilty for what has happened at Guantánamo Bay and elsewhere. Those responsible must be held accountable. We must speak for those who have no voice.

Ilyas Townsend from the Justice For Aafia Coalition then spoke about the case of Pakistani-American scientist Dr. Aafia Siddiqui who “disappeared” along with three of her children in 2003. She resurfaced a couple of years ago in Afghanistan, however one of her children is still “disappeared”. She is currently awaiting sentencing after allegedly attacking US army officers with a gun. Dr. Aafia Siddiqui claims that during the years of her “disappearance” she was held at Bagram where she was tortured and abused physically and sexually. Mr. Townsend stated that Dr. Siddiqui’s case is a clear case of the outsourcing of torture and that she is only guilty of being innocent; those guilty of her abuse and torture over the past seven years are still free. By presenting victims like Dr. Siddiqui as the wrongful parties, there is an attempt to legitimise the use of torture. He reiterated Joy Hurcombe’s point that people must speak out and raise awareness about these issues.

Nicki Jamieson from Fight Racism! Fight Imperialism! focused on the UK’s role in extraordinary rendition and the need to tackle impunity. Members of the previous government who were knowingly involved in complicity in torture need to be brought to justice and put on trial for their role in extraordinary rendition and breaking international law. There is an urgent need for an inquiry and bringing people to account for their involvement in torture, both in the UK and elsewhere.

John Clossick spoke on behalf of the Stop The War Coalition and emphasised the role of US policy abroad under the so-called “war on terror” to enforce its hegemony over different parts of the world and spoke about Shaker Aamer. He hoped that the new government would take measures to end the use of torture, renditions and would bring Shaker Aamer back to his family and community in South London.

The only politician to join the demonstrators was Liberal Democrat MEP Baroness Sarah Ludford, who has worked on the issue for over 8 years now and had helped to set up a committee on CIA renditions in the European Parliament. She stated her commitment to continuing to push for an inquiry as “there were British fingerprints all over extraordinary rendition”. She stated that is unfortunate that the kidnapping, “disappearance”, torture and detention without trial still continue. It is also regrettable that Guantánamo Bay and places like Bagram are still open. As well as providing no solution and constituting breaches of domestic and international law, such policies create alienation and injustice. Baroness Ludford expressed particular solidarity with Shaker Aamer and condemned the dishonesty of the last government which claimed not to practice torture but condoned and supported its use elsewhere. She also mentioned the case of the Canadian Maher Arar, who was compensated by his government for its involvement in his rendition and torture, yet the damage done to him and his family is priceless; Mr. Arar had given a testimony to the European Parliament committee on renditions. She also called for dialogue, which is important to end violence, similar to the dialogue the British government started with the IRA, indirectly through Sinn Fein. She also pointed out other human rights abuses under the current US regime such as the military tribunals to be held at Guantánamo Bay and extrajudicial killings in Afghanistan. Baroness Ludford stated that she would continue to oppose these injustices and stated her party’s commitment to human rights and civil liberties in the UK and abroad.

The final speaker was Doreen Brown, speaking on behalf of the Quakers and Action by Christians Against Torture, who expressed solidarity with torture victims of all faiths. She mentioned that Quakers too had been persecuted and tortured for their beliefs in the past. With respect to the British government, Mrs. Brown stated that while the government claims to uphold human rights, it is known to be involved in cruel, degrading and inhumane treatment all over the world, affecting not only hundreds but thousands of people. She also spoke about the case of Dr. Aafia Siddiqui.

The demonstration ended with a minute’s silence and some chanting. Signatures were collected on petitions and letters for various prisoners.
--------------------

26 June 1987 is the date on which, following ratification by enough countries, that the UN Convention Against Torture became international law. Torture was already banned under international law. In 1998 the UN General Assembly, in honour of the Convention, selected this date (26 June) as International Day in Support of Victims of Torture. Commenting on the significance of this anniversary, the then UN Secretary-General Kofi Annan said at the time, “This is a day on which we pay our respects to those who have endured the unimaginable. This is an occasion for the world to speak up against the unspeakable. It is long overdue that a day be dedicated to remembering and supporting the many victims and survivors of torture around the world.”

Twenty three years later, the world is no closer to preventing torture and instead since 2001, under the pretext of the so-called “war on terror”, its use and complicity in its use has proliferated. Passed as a law by the Clinton administration in 1995 to “render” individuals wanted by the US to justice, the use of “extraordinary rendition” increased after 9/11. It involves the extra-judicial transfer of individuals from one country to another and involves kidnapping, “disappearance”, torture and arbitrary detention. When Obama passed his now broken promise to close Guantánamo Bay within a year almost 18 months ago, he did not promise to outlaw extraordinary rendition. Earlier this month the US Supreme Court rejected a case brought by Canadian-Syrian citizen Maher Arar concerning his extraordinary rendition to Syria where he was held illegally and tortured for over a year.

“Extraordinary rendition” has led to the creation of what the Council of Europe called a “global spider’s web” of secret detention and torture facilities around the world. While EU states such as Poland, Lithuania and Romania have been alleged, and in the case of Lithuania admitted, to be hosts of such facilities, nearly all states are responsible for facilitating the use of air space and airports for the refueling and passage of rendition flights. It is alleged that some 400 CIA rendition flights may have passed through and refueled in the UK alone. The actual number of victims and sites involved is unknown. All the prisoners held at, in the past or present at Guantánamo Bay have been victims of extraordinary rendition and while the US administration slowly seeks to Guantánamo Bay, the detention facility at Bagram, Afghanistan, continues to grow.