This is an eyewitness account from an action by the Sea Shepherd Conservation Society, which set out onto the Mediterranean Sea last month in search of bluefin tuna poachers. As one of the most valuable fish in the world, the bluefin populations in the Mediterranean region have been reduced by over 85% in the last 50 years due to relentless industrial overfishing. Crew member Wietse van der Werf reports. 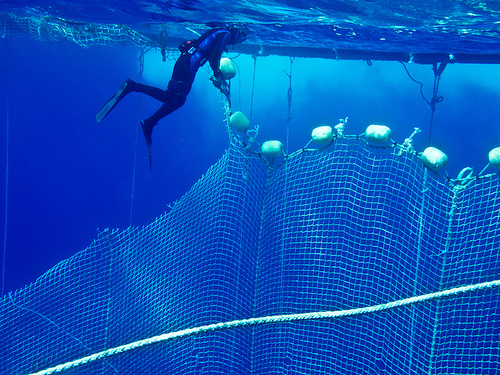 It is night when we enter Libyan waters. Everyone on the ship is excited, yet somewhat anxious about what is coming. We are the first to enter these waters in search of illegal bluefin tuna fishing. Neither observers from the International Commission for the Conservation of Atlantic Tunas (ICCAT), which 'manages' the fishery, nor French or Maltese navy vessels operate here. We are determined to find a floating cage full of illegally caught bluefin tuna, by now an endangered fish, and release them.

Our helicopter has been out for some time when it spots a target. Two tugs, towing a cage each, both full of tuna and headed for the tuna fattening farms in Malta. Down in the engine room we work to get the ship the extra thrust it needs to arrive at the target as soon as possible. Having a quick look up on deck, I can spot two vessels on the horizon. Around here you don't have to look far to find illegal fishing.

Closer to the vessels we request permission to inspect the fish. Only a certain percentage of undersized fish, known as juveniles, are allowed. This is often where the violations occur. Our request is refused. The fishermen state that the fish were caught on the last day of the allowed fishing season and that the cage contains the catch from eight different fishing ships. The story doesn't add up. The bad weather conditions in the fishing grounds we have witnessed in the last few days, which make fishing virtually impossible, and the relatively short distance the boats are from the fishing grounds make us highly suspicious of their story.

The engine room phone rings. 'Hold on, we're putting the bow over the cage to see what's inside'. We hold on and feel a shudder going through the ship as we park it against the cage. At that moment one of the fishing vessels, Rosaria Tuna, moves at speed towards us. Unhindered by our larger size, it smashes its bow into our port side. With a loud bang, steel bends and paint flakes off. One of the fishermen threatens us by swinging a pole with a large hook on its end across the deck. We respond by dropping a few bottles of rotten butter on their deck and they retreat. By now our ship is nosed in the pen and when it's clear that there are many tuna inside, our divers get ready for a closer inspection.

We move away from the pen and to our disbelief the Rosaria Tuna starts moving away from the scene. Once we have moved about a mile off and our divers are ready we turn and re-approach. This is our chance. With Rosaria Tuna moving off in the distance and the other tugboat Cesare Rustico standing by, our divers jump in the pen. Meanwhile the other tug has turned and approaches at full speed. The divers report back that they can see a large number of juveniles inside. We decide to intervene. The divers descend and start cutting the net. Within minutes the gigantic net is starting to move and the first tuna are curiously moving out through the new opening. As we stand on the bow we can see a few fish swimming away from the cage, then more and more until it is entirely empty. Eight hundred fish escape.

Everyone on the ship is in a state of euphoria. High fives, hugs and smiles all around. It is the first time anyone has managed to free bluefin tuna out of one of the numerous floating cages in the Mediterranean. With a market value exceeding seven figures, this is a big deal. As the tug is getting close to our starboard side and our divers are back in the inflatable boat, we turn sharply and start heading off. Repeated MAYDAY calls from the dumbfounded fishermen come through the radio as we haul up our little boat and head north at full speed. Within the hour rumours are circulating that the Libyan navy is on its way, but with us nearly out of their waters there is little they can do. On the Libyan front it stays quiet. Perhaps the country isn't willing to give attention to our action because they don't want the world to see that they have let poachers operate within their waters unhindered for so long. A surveillance plane circles over us the next day as we continue on a steady course back to land.

With more than 85% of the Mediterranean bluefin tuna populations killed off in the last 50 years, the stakes are higher than ever. The spawning bluefin tuna females could be wiped out as soon as 2012. Since the failure to add the threatened fish to CITES (the UN threatened species list) due to intense lobbying from Japan, the issue has been in a political deadlock. The need for action is more acute than ever. The bluefin tuna stands as a symbol for the way in which we continue to use the oceans as an inexhaustible resource without regard for the consequences which inevitably lie ahead. The oceans are in crisis. As the most important life support system on earth we simply cannot afford to let it be damaged any further.