I did not think the Ambient Green Picnic could get worse than last year. I was sadly proved wrong. 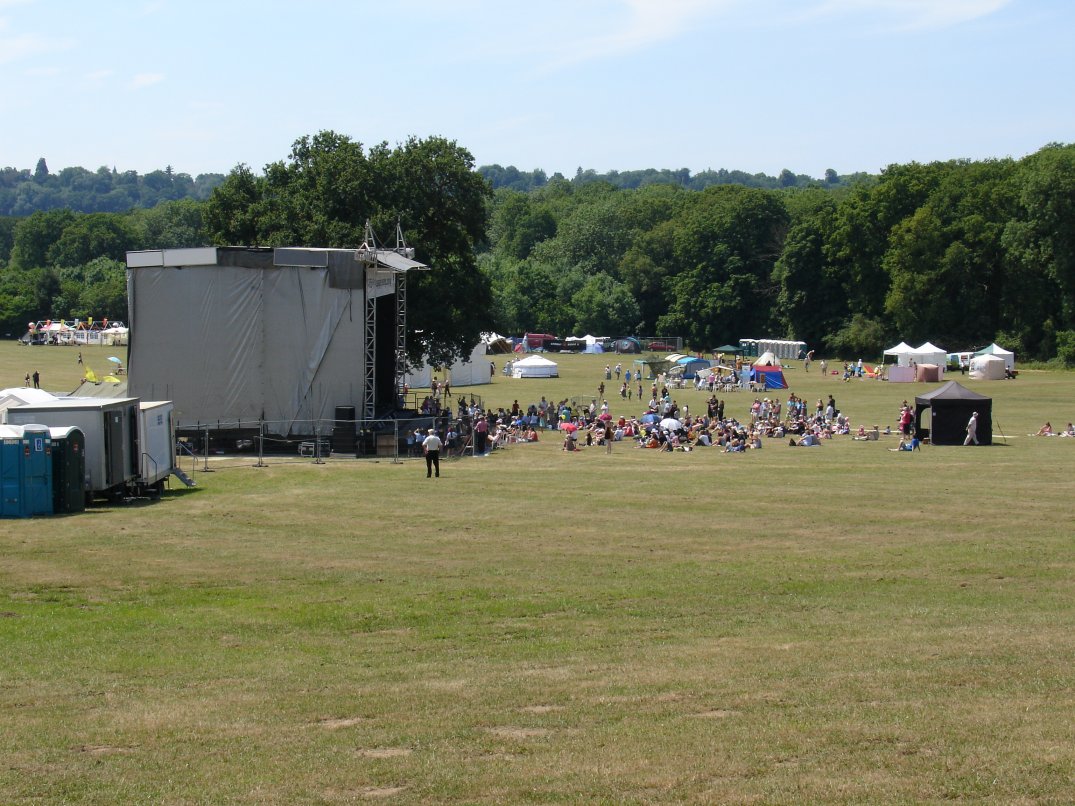 The Ambient Green Picnic in Guildford was once a fantastic free festival, well worth attending. And attend they did, down from London, up from Brighton. Then the last few years has seen a sorry decline, entrance fee for what was a free festival, security fencing, over-the-top heavy-handed security, smelly burger vans, local brewery beer tent, too commercialised. Last year was an unmitigated disaster, a small fenced-off corner of Shalford Park. It lacked atmosphere. The festival had lost its way, if not its soul, necessitating a complete rethink.

This is what the festival has to say on its website:

The Ambient Picnic will bring the best parts of the festival you know and love, plus experience a far greater cultural experience with 5 stages of music and performance. Get involved with participatorary arts workshops over the two festival days!

We are proud to see the long awaited return of The Ambient Lounge, the festival hub. A complete audio visual experience with mad décor, sofas and walls of television sets.

Economical with the truth if not downright deceitful!

The festival had not outgrown its site, it had been artificially constrained to one small corner of Shalford Park. This year it was part of Celebrating Surrey. It was necessary to book tickets in advance, else be forced to pay more on the day. Loseley Park (where the ice cream comes from), may be worth visiting, but it is out of the way unless you have a car. This has lost sight of the fact that this was a green festival, easily accessible on foot or by cycle, use of a car was discouraged, now they are promoting the fact there is ample free parking! This is an outdoor festival. Do we really want walls of TV sets? What had been good about the festival was not the music, which was too often rubbish, but the whole alternative culture thing, which no doubt was its downfall, as alternative culture never does endear one to the authorities.

It is part of a general trend, authorities clamping down on free festivals. It is ok to run a big commercial festival generating loads of rubbish, loads of dosh, but not a free festival offering alternative culture, that is an anathema to authorities.

Last year the Big Green Gathering was killed off before it got underway. This Mayday Bank Holiday an over-the-top police raid shut down UK Teknival.

There has though been exceptions, the most noticeable being Climate Camp on Blackheath Common last summer.

There are still free or almost free festivals taking place, sadly the Ambient Green Picnic is not one of them.

Loseley Park, or at least the house, is an Elizabethan Manor House built from stone looted from the ruins of Waverley Abbey. It is where the somewhat overrated and overpriced Loseley ice cream come from. It is located half way between Compton and Guildford, just south of the North Downs Way, and if you are going there on foot, that is the best way, along the North Downs Way, then drop down to Loseley Park.

Which is the way I walked. Along the River Wey, then instead of crossing the wooden footbridge to Shalford Park, up a little path by a stream and along the North Downs Way. The stream is a little chalk spring, very refreshing to drink from. Quite a trek with temperature hitting if not exceeding 30C!

Quite a trek, though a pleasant trek. It took me not far short of two hours.

Was it worth it? The short answer is no. At least not for the Ambient Picnic.

What I found on arrival was a large field, brass bands playing, some good some not so good, lacemaking etc. I thought I had stumbled upon a festival run by the local Womens Institute (though no jam), nothing wrong with that and I am not knocking it, but it was not the Ambient Picnic.

The Ambient Picnic was confined to a small edge of the field. Eden People were there and I was pleased to see them, but where were all the stalls? At least Eden People were 'green'. Their free drinks were in bio-degradable cups.

I did not think the Ambient Picnic could get any worse than least year, but sadly I was proven wrong, this was far far worse.

After the disastrous Picnic last year, it should have been a time for reflection, the opportunity to get back to grassroots, instead they chose to sell out.

Ambient Green Picnic was part of the Guildford Summer Festival running from 18 June to 1 August 2010.