The Battle of Nabi Saleh: Soldiers vs. Kids

When Israeli soldiers entered the embattled Palestinian village of Nabi Saleh on July 2, they were immediately confronted by over a dozen small children. While the IDF is accustomed to firing teargas canisters, percussion grenades, rubber bullets and even live .22 caliber ammunition at adolescent boys, members of the Nahal unit and Kfir infantry brigade tasked with suppressing the weekly Nabi Saleh demonstration were frustrated by the children who surrounded and taunted them. At one point, the division commander became so upset he barked into his radio, “I need backup!” 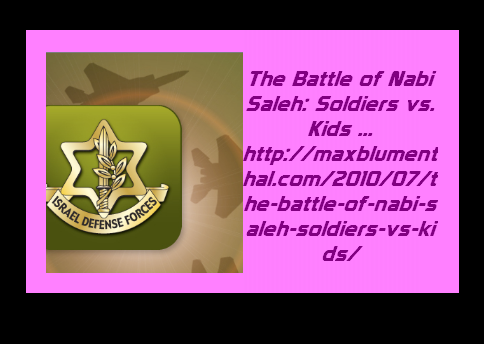 The spectacle of seven-year-old children confronting heavily armed and visibly confused soldiers offers one of the clearest perspectives of the lopsided power dynamic that animates the Israeli-Palestinian conflict. It also highlights the reality of life for children in the Occupied Territories. They play soccer and dodgeball between phalanxes of soldiers firing lethal projectiles at their neighbors just a few meters away — everyday life is an act of resistance.
Why are children participating in popular protests? Consider the case of Ni’ilin, a Palestinian village engaged in popular struggle against the construction of the separation wall across its privately owned land. The Israeli army is holding three members of its small popular committee — the political leadership of the village — in harsh conditions in Ofer prison. They were arrested without charges during a night raid, subjected to psychological torture by the Shabak (Israel’s General Security Service), and are being held indefinitely. ..... MORE:

http://maxblumenthal.com/2010/07/the-battle-of-nabi-saleh-soldiers-vs-kids/ ..... On July 2, the soldiers in Nabi Saleh wound up taking their frustrations out on two Israeli activists, Yonathan Shapira and Matan Cohen, violently subduing and arresting them. Though Shapira and Cohen were baselessly accused by the IDF Spokesman’s Office of “attacking” a soldier, they were released hours after their detention.
What are Israeli soldiers doing in Nabi Saleh in the first place? The village has been besieged by its neighbors from the religious nationalist Israeli settlement of Halamish since Halamish was constructed in 1977 on land privately owned by Nabi Saleh’s residents. Recently, the settlers seized control of a fresh water spring that has belonged to Nabi Saleh since the village was built in the 19th century. In December 2009, the settlers uprooted hundreds of the village’s olive trees in an attempt to re-annex land awarded back to Nabi Saleh in an Israeli court case. Since then, farmers from Nabi Saleh have been subjected to routine attacks by settlers and prevented from working their land. The Israeli army has come down firmly on the side of Halamish, suppressing the demonstrations with disproportionate force while doing little, if anything, to prevent settler violence. But if the spirit of Nabi Saleh’s young demonstrators are any indication, the army has a long way to go before it breaks the villagers’ will.

Netanyahu's warning to America: Palestinian state will lead to "second Mexico" inside U.S.

Another IDF Lie Exposed: Army Attacked Activists, Not The Other Way Around ........

Picture: The Battle of Nabi Saleh: Soldiers vs. Kids ...