The appeal by Democracy Village after last week's High Court ruling will be heard at 10.30am this Friday (9th July) at the appeals court. In the meantime the camp is still going on strong, having started 'Operation Rolling Thunder', more – an ongoing programme of non-violent direct action. The village is calling out for people to come down and help on multiple fronts: to come and do actions, to help with the site, keep it tidy and maintain the gardens. There is a particular call-out for those with direct action skills and experience. 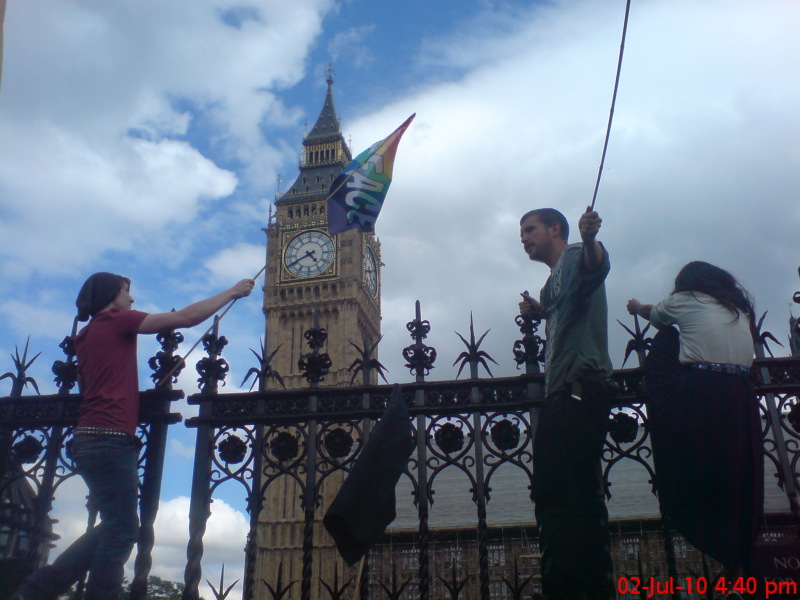 Protesters at the Democracy Village occupation in Parliament Square – which began at on May Day this year, had a High Court ruling against them last Tuesday (29th) to vacate by 4pm last Friday (2nd July) (see SchNEWS 729). However minutes before this, solicitors for the village managed to lodge an appeal, giving a temporary reprieve – until this Friday.

They're appealing on grounds that the ownership of the land is far from clear-cut - and the judge had bent the law to give Boris Johnson and the GLA the right to evict. (see SchNEWS 728)

After the appeal was lodged last Friday, the village – surrounded by press – took the protest off the square and moved towards parliament. Two managed to climb onto the lawns at the front of the Houses of Common, and stayed for 20 minutes before being nicked. Meanwhile a group of about 40 – and these numbers were more than doubled by participating tourists, as well as press, spilled out onto the road and blocked the road outside the Commons for up to an hour. Pics: 1 2 Video: 1

The protesters then left and moved up towards Downing St. Whitehall was blocked for 15 minutes leading to eleven arrests for obstruction.

Taken to court the following day (Saturday), four Democracy Village activists were jailed at Westminster Magistrates Court because they refused to pay the £40 fines following the actions. One of them, Simon, was also done for contempt of court after waving a peace banner in court and was handed a 20-day sentence. The other three got 7-day sentences. Other arrestees received cautions and fines. For more see: 1 2 Prisoner support: 1 2

If the appeal is lost, it could be a matter of days for Democracy Village before bailiffs come in. In the meantime all are urged to come to help and support the village. However if it is lost, the campers are saying that Democracy Village will turn into Democracy City , with anti-war actions and civil disobedience across the capital as Operation Rolling Thunder rolls on.