A story of ordinary repression: earthquaked and beaten up

Berlusconi’s regime deals with Abruzzo’s earthquaked inhabitants in the only way it knows: by spinning the story to avoid the blame. Now the inhabitants are protesting, they have become the new “monsters” of the media, no better than the anti-globalists who obviously have to be beaten up and repressed at every opportunity. 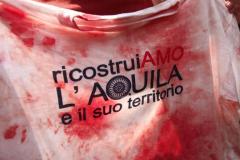 Let's rebuild L'Aquila and its region

Abruzzo’s groups called a demonstration in Rome on the 7th July, to demand the government’s serious committment in the re-construction and assurances for all the workers who lost their jobs because of the earthquake. The forces of “law and order” charged and beat up the above 5,000 people who wanted to reach the Parliament building in Piazza Colonna. This is the completion of a repressive scheme that started with silence over “the Abruzzo question”: a silence heavy with the hot air of politicians and world leaders, oblivion and hypocrisy.

Despite the situation individuals and groups in Abruzzo have always refused to play the game, and have organised numerous and varied forms of protest and proposal: from the “citizens’ committees” to the “people of the wheelbarrows”*, and the experimental citizens’ assemblies inside the Permanent Camp in L’Aquila. They are faced with the government’s tactic of excluding the locals’ from the decisions made about their own future – decisions that have drastically affected their environment, favoured depopulation and illegal building developments, and left all the problems unsolved (the main problem obviously being the re-construction of L’Aquila and the other 59 towns hit by the earthquake). Only emergency buildings have been built so far, but in a definite, permanent way, without urban planning – preventing the social and cultural re-construction of the community from the grassroots by regular doses of disempowering ‘welfarism’.

Abruzzo’ inhabitants knew from the start that the Civil Protection National Service ** had its own agenda. A Service that, like in Campania with the scandal of landfills, hands out huge contracts and commissions with no transparency, highlighted by the ongoing inquests. The citizens of Abruzzo demand their right to self-determination and in answer they get repression and hate.

* The “people of the wheelbarrows” is a spontaneous activist movement organised by inhabitants of L’Aquila to protest against the lack of re-construction actions.

** The Civil Protection National Service was theoretically created “to protect human lives, goods, settlements and the environment from damages or from the danger of damages deriving from natural calamities, catastrophes and other disastrous events”.