Warning over Nuclear Industry Freshwater Use

While Cumbrians face the prospect of £1000 fine for using a hosepipe during
the drought - Sellafield uses the equivalent of Millom, Barrow and
Ulverston's fresh water put together every day. Over 4 million gallons
are abstracted daily from Wastwater, Britain's favourite view, in order to prevent the high level liquid wastes from boiling. 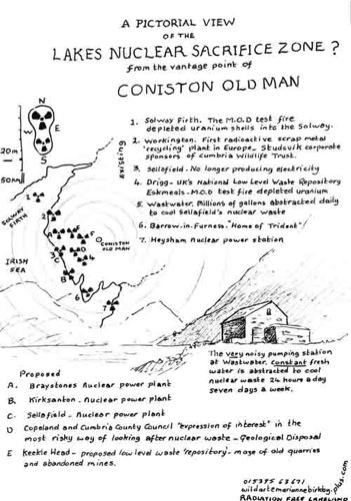 For its use of freshwater the nuclear industry pays exactly- nothing !
(apart from an abstraction license ie same as river hydro which puts the
water straight back). Nice subsidy if you can get it.

People in the Lakes are urged to save water and struggling to meet ever
increasing water utility bills while Sellafield cools its high level liquid
wastes and douses its workforce with pressure washes on Lakeland water for
free , using more water than any other industrial user in Cumbria.

If nuclear fans achieve their ambition of new nuclear build, Cumbria will
be enslaved to cooling the heels of the nuclear industry for many hundreds
of years to come. The waste will be dangerously hot for far longer than the
geological time Wastwater was formed - a mere 10,000 years ago.

At the Lakes for Living, Lakes for Life conference last year, Eric Robson of Gardeners Question Time fame and celebrity chair of Cumbria Tourism, publicly stated that the freshwater abstraction from Wastwater is "entirely sustainable" and that the Lakes freshwater resources can cope with new nuclear build. Radiation Free Lakeland strongly disagree and ask: should the Chair of Cumbria Tourism be "doing everything in my power to promote the county's largest industry" ??? People love him - he is the friendly, reassuring chair of Gardeners Question Time - as with the Bishop of Carlisle's pro nuke statements this is an abuse of (or reason for?) top position in Cumbria.

A recent report by economists (not environmentalists) said "It is
increasingly clear that the era of cheap and easy access to water is
ending, posing a potentially greater threat to businesses than the loss of
any other natural resource, including fossil fuel resources," it adds.
"This is because there are various alternatives for oil, but for many
industrial processes, and for human survival itself, there is no
substitute for water." (Pacific Institute)


Correspondence with Eric Robson - a letter requesting 10 minute slot to
talk about nuclear impacts at the Lakes for Living conference was
forwarded to him from the National Park organisers - he responded directly
to Radiation Free Lakeland - who never got the 10 minute slot.

> Dear Marianne Birkby,
>
> A few basic points.
>
> 1. I object to your cheap jibe that I'm the 'celebrity chair' of Cumbria
> Tourism. I'm a working chairman who does everything in his power to
> promote the county's largest industry.
>
> 2. It isn't 'rumoured' that I support new nuclear build. Personally I
> support new nuclear build because in my opinion the only proposed
> alternative is a proliferation of wind farms which will deliver
> insufficient energy to stop the lights going out while at the same time
> blighting the landscape and environment that you pretend to cherish.
>
> 3. You're not being stitched up. Just challenged.( Which I know is
> difficult to accept for those of a green and furry disposition who believe
> they have a divine right to acceptance.) The conference you object to is
> tackling serious issues as opposed to the part-digested posturing which
> graces most of your long email. 'Thirsty elephant in the room?' What on
> earth are you talking about? I wish I had the time to play such silly
> games. Unfortunately there are more pressing issues such as an
> international financial crisis and the need to protect jobs, businesses
> and the environment.
>
> 4. Forgive my bluntness, but as a working chairman I really object to
> groups who claim divine right in the absence of logical agrument.
>
> Eric Robson

1. "Celebrity chair" was a statement of fact -I am sure you work hard
and get paid accordingly. I've been described as a celebrity - hilarious-
hardly a jibe "green and furry .. divine right" is good too.

2. The rumour of your nuclear support is true.
The nuclear industry after suppressing renewables for years have now come
out and said that wind energy would produce too much electricity for new
nuclear build. Nuclear is inflexible and requires fossil fuel back up.
Its time we looked at the landscape differently. Nuclear power stations
are ugly -as are the huge uranium mines feeding them - but some might find
them beautiful.

3. Not stitched up? Have you seen the NDA's spending on bribery? Every
where you turn in Cumbria the NDA has poured in taxpayers money - for
services that should be funded through national government. - hospitals,
universities, citizens advice bureau, council staff, made in cumbria,
staff, biodiversity action plan, cumbria wildlife trust etc etc . You
are right we are not being stitched up - its a form of abuse thats been
going on for years ......

I hope that the conference organisers will allow a speaker 10 minutes on
the impacts of the nuclear industry on the Lakes catchment areas.

If only someone had listened to the financial crisis whistleblowers -
living beyond our means is one thing - beyond the means of future
generations is crapola.


If you are interested below are answers to some (not all) freedom of
information questions asked
recently of the NDA.

The MYTH Carbon Free -
Far from being 'carbon free' Sellafield buys in £30 million pounds worth
of gas every year to ensure 'security of energy supply' despite no
electricity being produced since 2003. Every nuclear power plant needs a
separate energy source and workers who need to travel in ( as plants are
positioned away from centres of population) to prevent catastrophe - long
after production of any electricity.

The MYTH Environmentally Sustainable -
Sellafield pipes over 4 million gallons of water a day from Wastwater -
Britains favourite view . As well as this, water is abstracted from River
Ehen, River Calder, Beckermet Mine and Boreholes near Calder Bridge and
Calder Valley.

Which industry is he talking about - Tourism?

At the Lakes for Living conference Mr Robson did a good job of promoting the nuclear industry and undermining renewables.

In a drought we need water for essential uses like industry and drinking. That's why we have a hosepipe ban. Most people never use a hosepipe from one year to the next anyway.

We are going to get new nuclear power stations. Nothing the eco-brigade do will change that.

I notice that industry is put before drinking

"Essential" industry has a lot to answer for already without new nuclear build trashing a livable Earth.

>> Mmmm
>> I notice that industry is put before drinking

Typically, it is usual in the English language to put the most import thing last for enphasis.
Most people write a list separated by commas and then put the last one after the word AND.
Eg. x,y and z

So i would read this as driinking being more important than Industry.

Anyway, its got nothing to do with it. Im sure how this person has written things has no bearing or effect on the actual priorities and procedures followed by the water utility companies - i may be wrong but i doubt it.

If nuclear fans were to get their hearts desire and there was new build - the wastes would be given top priority for freshwater supply - 24 hours a day - 7 days a week for tens of decades to come, both during and long after the plants have stopped producing electricity.

Domestic users of freshwater- you, me, uncle Tom Cobley and all would have to take a running jump.