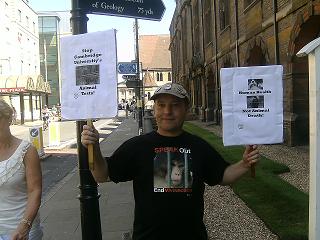 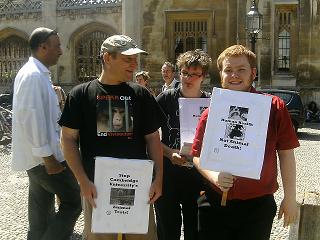 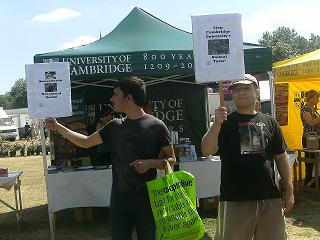 Activists from Animal Rights Cambridge were at Cambridge Uni sites today informing tourists and members of the public about the animal testing that goes on in the lab of the Uni, the activist met up at the main town centre and went for a wonder through the Cambridge Big Weekend event (which is sponsored by Cambridge University).

Even before the demo had started the police (no. 1981 Mark Howe) tried to intimidate activists by claiming he could smell cannabis (even though no one was smoking) and then threatened to search the campaigners. An protest who was filming the police throughout the debate between the police and the activists was asked why he was filming and then asked if he would like to escort the officer to the station so they could take a copy of the footage by their video evidence team. When challenged over such law the officer replied “the law doesn't matter” activists duly took note and just left to go off and demo- in general agreement with the sentiment of the officer that the law was irrelevant!

At Cambridge Uni campaigners informed the public about the abuses and cruelty that goes on in the Uni labs. 500 primates are held at Cambridge Medical School at any one time for example. Activists attended Kings and Downing Site before heading back to the Big Weekend to inform yet more people.

The megaphone was used to good effect informing people at Downing Site about the abuse in the labs and it was a good day of action. We will be back, Cambridge Uni and all Uni's that do animal experimentation!

Video to be uplaoded shortly