The English Defence League are disgusting animal abusers. They think that it is funny to take the head of a butchered animal and use it as a "joke". Kevin Smith of the English Defence League too a pigs head and put it on the walls of a Mosque in Dudley to offend Muslims. The EDL are "campaigning" to stop another Mosque being built in Dudley. Many of them are racist thugs. They abuse animals too. 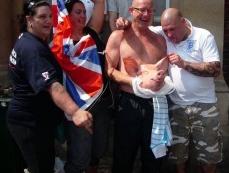 The EDL have spoken at their meetings, protests and other events about animal rights. They have claimed that Muslims are "animal abusers" because Muslims eat Halal.
It is the EDL who have taken the butchered head of aonce living sentient creature and used that dead animals head for "entertainment" [for themselves] and to get at Muslims.