It is clear that the Communist Party of the Philippines’ theory and practice of due process is based on the assumption of innocence or diminished criminal culpability when cadres toe the official line, but becomes assumed guilt when cadres raise questions against the central leadership. 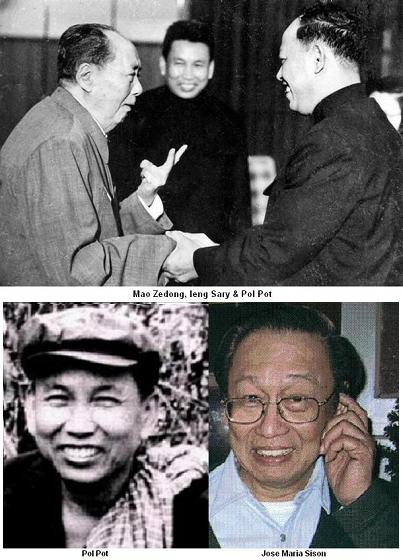 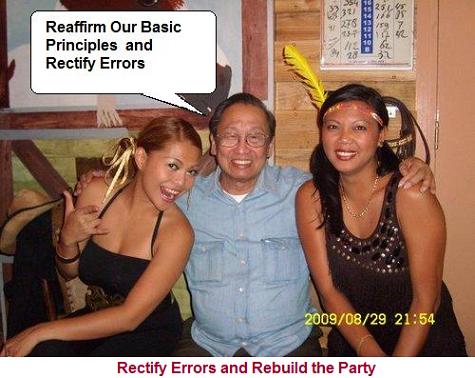 I find it funny how our leading Communist Party of the Phillippines (CPP) cadres jump with joy when cases against them are dismissed in the bourgeois courts of law. Of course, to make their elation seem “revolutionary,” the CPP’s esteemed leaders thank the mass movement and at best their lawyers, but never—I repeat—never the due process of law and rule of law that these courts follow.

Take Comrade Elizabeth Principe-Velasco who walked out of the Philippine National Police Custodial Center at Camp Crame in July 21, 2009. “I owe no debt of gratitude to this government for my release. I owe my freedom to the mass movement and my lawyers,” Principe-Velasco insisted.

Yet it was the Regional Trial Court in Nueva Vizcaya that dismissed the fourth and last of the criminal charges against Principe-Velasco. Earlier, the Ilocos Sur provincial prosecutor’s office dismissed rebellion charges against her. The three-page resolution signed by Fiscal Redentor Cardenas stated “the participation of the accused Elizabeth Principe was not actual but only presumed. Under the basic tenets of criminal law, any doubt should always be interpreted in favor of the innocence of the accused.”

In other words, the Regional Trial Court (RTC) upheld the principle of presumption of innocence until proven guilty beyond reasonable doubt. It's a stretch of the truth to attribute the dismissal of Principe-Velasco’s case solely to her lawyers and the pressure of the Free Elizabeth Principe and Surface Leo Velasco Task Force. The Ilocos Sur provincial prosecutor decided that the case lacks probable cause.

Both Comrades Principe and Sison used the power of the puppet state of the Philippines and that of the bourgeois Dutch courts to provide them with protection. Can we similarly expect that from our Hukumang Bayan (People's Court)? Let’s talk about the theory and practice of our revolutionary justice.

This is being consistent with the Marxist-Leninist teaching that the state in the proper sense of the term is a machine for the suppression of one class by another, that the proletarian revolution must destroy, smash the bourgeois (or in the case of the Philippines, the semicolonial and semifeudal) state and do away with its main instruments of oppression: the army, the police, the bureaucratic machine, the courts and the prisons.

That intent to do away with “bourgeois legalism,” however, failed to protect comrades and cadres from rape, torture and murder from Oplan Missing Link (OPML); or Olympia, Cadena de Amor, Kampanyang Ahos and other small-scale anti-DPA campaigns in the Visayas.

How many of those comrades who incurred blood debts against innocent comrades were tried and punished under the Hukumang Bayans that Party cadres know don’t exist. It is the different leading Party committees who decided on whom to punish with death and who to slap on the wrist with demotions, suspensions and criticisms.

The document “Reaffirm Our Basic Principles and Carry the Revolution Forward” has this to say:

“The enemy tries and expects to weaken and destroy the Party and the revolutionary movement in 1992 and 1993. But he will continue to fail and fail even more dismally as we further build upon the accumulated achievements of the Party, rectify errors and deviations, expand and consolidate our mass base and strengthen the Party and other revolutionary forces in an all-round way.”

And who are these enemies who tried to weaken and destroy the Party in 1992-93?

“The Communist Party of the Philippines (CPP) and the people’s prosecution office that Ricardo Reyes is facing criminal charges related to Kampanyang Ahos (Campaign Garlic) and other crimes and that there is prima facie evidence against him to support the warrant issued by the people’s court for his arrest.

“Since 1992, (Reyes) has been formally charged before the people’s court for abusing his high position in the CPP Mindanao Commission and violating human rights by instigating, approving and conducting Kampanyang Ahos. This campaign involved the kidnapping, torture and murder of hundreds of CPP cadres and members, NPA commanders and fighters and mass activists who were falsely accused of being enemy deep penetration agents (DPAs).”

Sison further charged that Reyes extended the campaign to the national capital and tried to malign as DPAs some prominent mass leaders of the national democratic movement, falsely accusing them of criminal links with those arrested as Deep Penetrating Agents (DPA) in Mindanao. The CPP Executive Committee defended and protected the mass leaders and stopped Reyes from making a pogrom in the national capital.

But still, Sison insists, Reyes managed to carry out the abduction of Dave Barrios from the UCCP building in 1986, with the assistance of Nathan Quimpo and an armed team assigned by Romulo Kintanar. Reyes was the one who twice injected the drug to put Barrios to sleep and who drove the car that brought the victim to a safehouse for torture and murder. The testimonies of two direct witnesses supposedly were used as evidence before the people’s court.

We are not privy to exactly how the Hukumang Bayan rendered its judgment based on rules of evidence. But accusations proved convenient in the ideological struggles. Our Beloved Warrior (Amado Guerrero) aka Armed Light (Armando Liwanag) blames Reyes, Quimpo and Kintanar, cadres who have raised issues against the Reaffirm document and other fundamentals of the protracted people’s war strategy.

I might agree to that, for the sake of argument, if the treatment of those with criminal liability on the purges were even-handed. Alas, that is not the case. Fairness, equal treatment and historical objectivity are alien concepts to the Party.

With Luneta, it seems the “people’s prosecution office” took a leave of absence when he unilaterally decided to execute 160 CPP cadres and members in Southern Tagalog under OPML. Luneta even when to the extent of torturing and sexually molesting NPA-ST’s male “detainees.”

Let us not forget our beloved Party spokesman Comrade Gregorio Rosal aka Ka. Roger who took part in the OPML killing fields.

Then there were Comrades Satur Ocampo and Fidel Agcaoili, Chairman and Vice-Chairman respectively of the National United Front Commission who joined Luneta in the decision-making in OPML in Mauban, Quezon in 1988. Later under OPLAN Olympia, they ordered the arrest of Redempto Anda, and eight others in the United Front Commission

Also under a cloud of suspicion was Adel Silva, a former political detainee who escaped from military detention in 1974. He later headed the CPP National Trade Union Bureau in 1983.

Even Rodolfo Salas was not spared from suspicion. Salas was the former CPP Central Luzon secretary who became CPP Chairman when Sison was arrested in 1977). Sison considered him as a political rival in the CPP Chairmanship because of notions that he outdid Sison as Party Chair from 1977-86.

Another counter-revolutionary suspect was Edsel Sajor, former National Propaganda Chief in 1987 who earlier escaped from a military safehouse in 1974.

And finally, Arturo Tabara, the former Visayas Commission Chairman who escaped prison from Bicutan in 1985. Ironically, the 10th plenum in 1992 chose Tabara as a member of the Executive Commmittee of the Party’s Central Committee just before he bolted out from the CPP.

Most certainly, the Party, the Potemkin-type offices of the Hukumang Bayan (People's Court) and people’s prosecution office has yet to come up with rape, murder and torture charges against those who masterminded the anti-DPA campaigns but remained Party loyalists.

Bourgeois legalism gave Comrade Velasco-Principe a fairer deal than the comrades who in the name of upholding revolutionary justice meted torture and death with impunity on their innocent victims. The Party’s 1992 rectification movement rubbed salt on the victims’ wounds by glossing over the guilt of Party loyalists. Our proletarian vanguard organization has not cleansed from its ranks rapists, sadists, torturers and murderers.