US and Israel quietly announce plans to reconstitute their nuclear stockpiles

The Obama administration makes Orwellian claims that it is moving toward disarmament - when in fact it's doing the opposite by reconstituting its aging arsenal. At the same time, Obama demonizes foreign nations such as Iran, which international inspectors and US intelligence agencies concede is not developing nuclear weapons (at least according to all available intelligence). 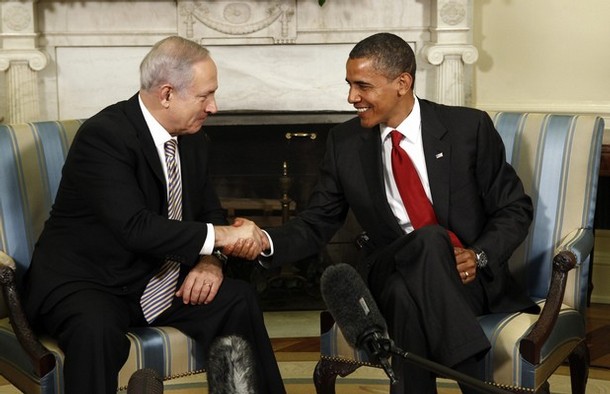 
The world looks like it's about to become a more dangerous place. A recent report from Israel's newspaper Haaretz finds that the United States is moving forward with plans to strengthen Israel's nuclear weapons stockpile. The report, exposed within the last few days, originated from Israel's Army Radio, which sent along a secret document chronicling the nuclear cooperation between US and Israeli leaders.(1) Israel has not signed the nuclear Non-Proliferation Treaty (NPT), meaning that it is not technically violating international rules under the NPT regarding the development and reconstitution of nuclear weapons, despite longstanding efforts of the international community to establish a "nuclear weapons free zone" in the Middle East.

Part of the fear of those advocating nuclear abolition in the Middle East is that the United States will agree to send nuclear materials - extracted from its own civilian nuclear power plants - to Israel, much as it did for India, another country that refuses to sign the NPT.

The Obama and Netanyahu governments are seeking to obscure their contempt for nuclear abolition by calling for "nonproliferation" in the Middle East, while Israel simultaneously boycotts New-York-based discussions (at the 2010 NPT conference) of the need for a "nuclear free" Middle East.(2) "Nonproliferation," within this context, can be understood to apply only to other countries such as Iran, which has long been a target for US and Israeli military planners.

Independent journalism is important. Click here to get Truthout stories sent to your email.

The Obama and Netanyahu governments recently announced that they will oppose efforts at singling Israel out in any "nuclear weapons free" Middle East discussion. The problem with this announcement is that Israel is the only country in the Middle East to currently have nuclear weapons. In light of this fact, any attempts to shield Israel from being "singled out" will inevitably prevent progress in moving toward nuclear disarmament in the region.

Much is made of Iran's alleged efforts to develop nuclear weapons by Israel and the United States. This propaganda campaign appears to be paying off in light of Iran's recent announcement of its planned opening this September of a nuclear power plant in the southern port city of Bushehr.(3) US and Israeli officials maintain that Iran is enriching uranium under the auspices of a civilian nuclear program, while secretly using its uranium stockpile to develop nuclear weapons. Those who make such claims are at a loss to explain why the International Atomic Energy Agency - in addition to the US National Intelligence Estimate - found no evidence of nuclear weapons development in Iran, despite countless inspections by international observers.(4) Those claiming that Iran is a threat are also unable to explain why inspectors are unable to uncover any evidence that Iran is producing highly-enriched uranium (of a quality suitable to develop a nuclear weapon), but instead only produces low-enriched uranium suitable for use in nuclear power plants.(5)

Despite the critical evidence above, the US-Israeli propaganda campaign is succeeding in obscuring Israel's and the United States' own open contempt for nuclear disarmament. It should be remembered that the US openly violated the NPT late last year when it announced it would extract plutonium from its own nuclear reactors in order to create a new generation of nuclear weapons (for more see the original news report here).

According to Fox News polling, as recently as April 2010, 65 percent of Americans support "the United States taking military action to keep Iran from getting nuclear weapons."(6) This represents a four percent increase since September 2009. As of late 2009, CNN polling found that an astounding 88 percent of Americans believed that Iran is developing nuclear weapons - a 27 percent increase since December 2007.(7) Similarly, a poll from the Center for Iranian Studies at Tel Aviv University found that 81 percent of Iranians believed Iran will develop a nuclear bomb, according to polling done in mid 2009.(8)

Recent revelations that Israel is moving forward with US help in reconstituting its nuclear weapons program are ignored in the US press. At the same time, the United States' own efforts to redevelop its nuclear stockpile are completely suppressed, despite the obsession of both the United States and Israel with Iran's fictitious nuclear weapons. The Obama administration and the mass media are now promoting a false narrative depicting the US as committed to nuclear transparency and disarmament, and its enemies as opposed to such practices. Nowhere is this strategy more evident than in the Obama administration's continuous attacks on Iran's "nuclear threat," pursued alongside Obama's announcement of a new commitment to "nuclear transparency." More specifically, the Obama administration publicly disclosed the (previously classified) total number of operational US nuclear warheads in existence today - which stands at just over 5,000.(9) While this step was a move in the right direction in terms of drawing attention to the United States' massive stockpile, it was cynically pursued alongside a quiet announcement by the Department of Energy (originally made in September 2009) that the US is moving forward with developing a new generation of nuclear weapons, rather than working toward nuclear disarmament as legally required under the NPT.(10)

The Obama administration makes Orwellian claims that it is moving toward disarmament - when in fact it's doing the opposite by reconstituting its aging arsenal. At the same time, Obama demonizes foreign nations such as Iran, which international inspectors and US intelligence agencies concede is not developing nuclear weapons (at least according to all available intelligence).

Secretary of State Hillary Clinton announced, following the administration's report on the US nuclear stockpile, "We think it is in our national security interest to be transparent as we can be about the nuclear program of the United States ... the important part is that the US is no longer going to keep other countries in the dark."(11) Such statements are disingenuous at best when the US decides to redevelop its aging weapons, while any discussion of this is omitted in media and political discourse. Instead, readers are subject to reporting from The Associated Press that frames the Obama administration as "serious about stopping the spread of atomic weapons and reducing their numbers."(12)

US attention to Iran's nonexistent nuclear weapons program is all the rage in the US media. According to a comprehensive search of the Lexis Nexis database, the words "Iran" and "nuclear weapons" appeared in nearly 1,000 stories across The New York Times, Washington Post, ABC, NBC, CBS, CNN, Fox and MSNBC from January through June 2010. In contrast, the United States' own openly declared "Complex Modernization" program - in which the US allocated $55 billion to extracting plutonium pits and enriched uranium from existing nuclear power plants to place in new nuclear warheads(13) - received not a single mention in any of the above media outlets from September 2009 when the plan was first announced, through June 2010, shortly following Obama's announcement of his renewed commitment to nuclear "transparency" and "disarmament."

It is disturbing that the US plan for nuclear weapons production is completely censored from public discourse. Obama promised to "seek the peace and security of a world without nuclear weapons." The Department of Energy's plans clearly violate this promise, and run counter to US obligations under the NPT to pursue US nuclear disarmament, rather than rearmament. It is no surprise that the US media establishment is ignoring this story, considering that American journalists are heavily reliant on official sources to write their stories and since journalists see US foreign policy as benevolent and humanitarian in intent. By ignoring the United States' contempt for nonproliferation, the mass media is guaranteeing that Americans will remain ignorant of the United States' brazen commitment to power politics at the expense of global security and stability.


* Anthony DiMaggio taught US and global politics at Illinois State University prior to becoming a casualty of this year's Illinois budget cuts. He is now the editor of the online journal, www.media-ocracy.com, which is devoted to studying issues of public opinion, mass media and current events. He is the author of "Mass Media, Mass Propaganda" (2008) and the forthcoming "When Media Goes to War" (2010).


6. For the figures provided on public opinion of Iran, see the poll aggregator, Polling Report.