The English Defence League are an Islamophobic organisation with links to hardline racists including Combat 18, Blood and Honour, BNP and National Front. They also have links to Islamophobes from Stop Islamification of Europe [Zionists] and the Hindu Defence League [Islamophobes] and Sikhs Against Sharia. 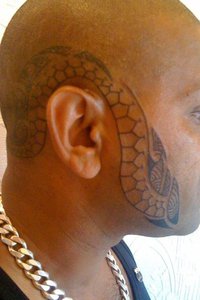 It comes as a shock to many people that there are Hindus and Sikhs joining in with the EDL against Muslims. But they are there...many people of hear of Guramit Singh.

Then there is the repellant Islamophobic moron Salinder Bhatoa who has joined the EDL. He is too ashamed or scared to show his stupid face on his facebook etc but he is quite proud of the identifying tattoo on the back of his Islamophobic head.

Salinder leaves "Goodnight EDL" messages for EDL on facebook aawww....he says that the day he got his EDL badge and hat was the proudest day of his life.

Salinder got a message one day ...from the Muslim Defence League. He put out a cry for help on facebook. He said "A paki from the mdl has just phoned me what shall I do?

He has recently asked if anyone has got a "Kran" because he's "run out of bog paper".

He asked where did the m.d.l. come from? and even "Why are pakis sula joining edl?"

A total prick. Smash the EDL! EDL go to hell. Take your Nazi mates as well!