A lesson in bad faith: Response to the Brazil-Iran-Turkey Joint Declaration

The countries comprising the "Vienna Group" (i.e. USA, France, and Russia plus the International Atomic Energy Agency, IAEA) have expressed their "Concerns about the Joint Declaration Conveyed by Iran to the IAEA”. Iran has repeatedly declared that the Tehran Brazil-Iran-Turkey Joint Declaration was never intended as a final binding document, but as a basis for talks. Therefore, all of these “concerns” can and must be addressed within the framework of that basis. 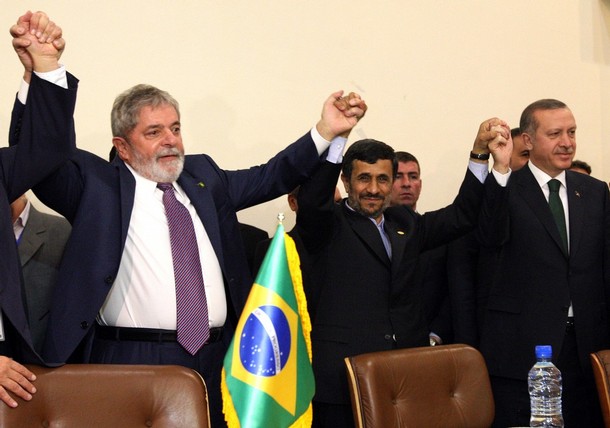 Lula, Ahmadinejad and Erdogan sign the joint declaration in Tehran, 17 May 2010


A lesson in bad faith: the Vienna Group's response to the Brazil-Iran-Turkey Joint Declaration


The countries comprising the "Vienna Group" (i.e. USA, France, and Russia plus the International Atomic Energy Agency, IAEA) have expressed their "Concerns about the Joint Declaration Conveyed by Iran to the IAEA”. Iran has repeatedly declared that the Tehran Brazil-Iran-Turkey Joint Declaration was never intended as a final binding document, but as a basis for talks. Therefore, all of these “concerns” can and must be addressed within the framework of that basis.

According to Reuters, these are the “concerns”:

1) The Joint Declaration (JD) does not address Iran's production or retention of 19.75 percent enriched uranium. The cessation of such enrichment and the removal of the 19.75 percent uranium already produced (at the same time as the removal of the 1,200 kilograms of 3.5 percent Low Enriched Uranium, LEU) should be an integral part of any Tehran Research Reactor (TRR) refueling arrangement.

2) The JD asserts a right for Iran to engage in enrichment activities despite the fact that several United Nations Security Council (UNSC) resolutions prohibit Iran from pursuing such activities.

3) The JD does not indicate that Iran is willing to meet with the P5+1 countries (i.e. the permanent members of the UNSC plus Germany) to address the international community's concerns about its nuclear program. Although Iran agreed in October 2009 to meet again soon with those countries to focus on the nuclear issue including proposals previously put forward by both sides Iran has never agreed to hold this meeting. A P5+1 meeting to focus on the nuclear issue is an essential step to address the international community's concerns regarding Iran's overall nuclear program, which have been well-documented in numerous UNSC resolutions and IAEA reports.

4) Unlike the Vienna Group's October proposal, the JD does not set a date certain for removal of the 1,200 kg of 3.5 percent LEU from Iran. The JD states that the LEU would be removed within one month of the conclusion of an implementation agreement. But because there is no timeframe specified for completing that agreement, there is no deadline for removal of the LEU.

5) The timeline for the full delivery of the fuel assemblies to Iran is unrealistic. The IAEA's Project and Supply Agreement called for initial delivery of fuel within about one year to ensure the uninterrupted operation of the TRR, with remaining fuel to be delivered at a later date. The JD calls for all the fuel to be delivered in one year, which we are confident would be impossible to meet.

6) The JD indicates that, if Iran decided unilaterally that the provisions of the arrangement were not being respected, Turkey would be obliged, upon the request of Iran, to "return swiftly and unconditionally Iran's LEU to Iran." Under the previous "escrow" proposal, the return of LEU would be justified if the parties failed to deliver fuel assemblies to Iran as agreed.

7) The JD states that Iran's LEU would be the "property" of Iran while in Turkey. The Vienna Group's October Proposal stated the IAEA would maintain "custody" of the LEU throughout the process.

8) Important technical details of the fuel resupply arrangement are not addressed in the JD. For example, it does not specify what happens to the 1,200 kg of LEU held in escrow in Turkey after the fuel assemblies are delivered to Iran.

9) The JD does not account for Iran's accumulation of LEU since the IAEA first proposed the TRR deal. Removal of 1,200 kg at present would leave Iran substantial stocks, decreasing the confidence-building value of the original proposal. The JD provides no alternative means of ensuring that the confidence-building element of the arrangement would be maintained."


Some of these items seem to belong more to a public-relations statement targeting the general public than to an official document addressed by a group of world powers to a country with which they intend to talk, and thus cannot be taken seriously. What else to make of items 3 and 4, for example? Iran has stated its willingness to negotiate with the P5+1 many times, even before signing the JD, and a specific mention to talks with the P5+1 is made on item 9 of the Tehran Declaration: “We welcome the decision of the Islamic Republic of Iran to continue as in the past their talks with the 5+1 countries”. If this was not enough, what was to prevent a point scheduling talks with the P5+1 from being included in a final document? And why say that the “JD does not indicate that Iran is willing to meet with the P5+1 countries” when the JD makes a specific mention to such talks?

Item 4 is laughable: if the shipping of Iran’s LEU to Turkey is to take place 30 days after reaching a final agreement, how can a firm date be set before a final agreement is reached? Or item 7: since when does “custody” exclude “property”? Iran’s LEU, both in the JD and in the “escrow” proposal, is to remain Iran’s property until all clauses in a swap agreement are met; this is precisely what “escrow” means, according to the American Heritage Dictionary: “Money, property, a deed, or a bond put into the custody of a third party for delivery to a grantee only after the fulfillment of the conditions specified.” Or again, item 8: this is a nuclear-fuel swap agreement, right? A certain amount of Iranian LEU is to be “swapped” for a certain amount of further-enriched uranium fuel-assemblies for the TRR. Again, the American Heritage Dictionary tells that a “swap" is the trade “of one thing for another”. To anyone having a dictionary at home, it would be obvious that "what happens to the 1,200 kg of LEU held in escrow in Turkey after the fuel assemblies are delivered to Iran” is that the LEU held in custody will be delivered to whoever delivers the fuel assemblies to Iran, details to be fine-tuned in further negotiations. But apparently this is not clear to Russia, France and the United States, and they need to express their concern.

Other items use half-truths or take their negotiating targets as done deals, or, as item 5, try to leave the door open for reneging on the whole agreement: if Iran, with its limited enrichment ad fuel-producing capabilities, was able to produce 22 kg of uranium enriched to 20 percent in six months, why wouldn’t France, the USA, and Russia, who together respond for 95 percent of the world’s enrichment capabilities, be able to produce 120 to 200 kg of uranium enriched to 20 percent and turned into fuel assemblies in 12 months? Item 6 is a pearl: the JD is a proposal for a swap agreement; in any swap agreement, one party agrees to deliver an item or set of items to another party in exchange for another item or set of items within a certain timeframe: Iran delivers 1,200 kg of LEU in exchange for 120 kg of fuel assemblies from France and Russia within one year. If these provisions are not respected, Iran’s LEU is to be returned to its rightful owner. What in the current proposal is different from “the previous ‘escrow’ proposal”?

Item 2 is the central piece of this list of concerns: “The JD asserts a right for Iran to engage in enrichment activities despite the fact that several UNSC resolutions prohibit Iran from pursuing such activities”. It deserves a detailed parsing:

* Iran’s right to engage in enrichment activities as a nuclear Non Proliferation Treaty (NPT) signatory is not in question and of course is non-negotiable. The NPT clearly states that all parties to the treaty have an “inalienable right” to develop, produce and use nuclear energy for peaceful purposes. Iran may decide to waive its rights in exchange for significant advantages in this and other areas, such as a non-aggression pact including the United States and Israel, but under international laws no one can “prohibit” it to exert its rights to master the full nuclear-power cycle. So much so that,

* unlike what is stated in item 2, The UNSC Resolution 1929 does not "prohibit” Iran to enrich uranium but calls for a suspension of “all enrichment-related and reprocessing activities, as verified by the IAEA, to allow for good-faith negotiations”.

So item 2 is based on a plain lie. Not one UNSC resolution on the Iranian nuclear program has ever prohibited Iran from enriching uranium. All of them call for a “suspension” of enrichment activities pending negotiations – in “good faith” – about a way to guarantee Iran’s “inalienable right” to develop a full nuclear-energy program while assuaging concerns about the exclusively peaceful nature of this program.

This leaves us with items 1 and 9. Both refer to issues that could perfectly well be included in amendments to the original Tehran Declaration, with no need for a new round of sanctions, the main effect of which was to make negotiations more difficult and to eliminate “good faith” from the proceedings.

Despite the evidence of an unwillingness to negotiate that these "concerns" provide, Iran is still open to talks, and has said so time and again. Given this show of bad faith by France, the United States and Russia in response to the proposal of a basis for talks, the presence of honest brokers such as Turkey and Brazil in any further negotiations is a pre-condition from which Iran cannot step down and to which Brazil and Turkey must adhere unequivocally, to honor their previous commitment to finding a peaceful negotiated solution to the Iranian nuclear standoff and to protect their own rights in the future from similar concerted attacks by the nuclear powers.