Wildlife Nuked?- No Thanks!

Uranium mining is the beginning of the nuclear fool cycle.
Cumbrians have been invited to make charcoal drawings of the threatened wildlife and habitats in Finnish Lapland.
"What time is it Mr Wolf? Time to stop uranium mining! 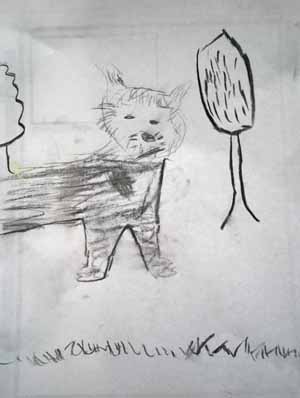 What time is it Mr Wolf? Time to stop uranium mining!

To the Prime Minister of Finland

We have attended events in Cumbria highlighting the impacts from nuclear developments not only on us here in the UK but also worldwide. Many people are astounded to hear that the nuclear industry is being deregulated to allow uranium mining in the wilderness areas of Finland including Finnish Lapland. Habitat is under threat which is home to wolves, bear, lynx in fact many of the animals that could be seen in Cumbria 10,000 years ago.

We note that the French state and its multinational company Areva/Cogema (Areva also in Sellafield partnership) are trying to force new uranium mining in Finland. Areva’s aggressive market policy to force uranium mines in fragile and increasingly disappearing habitat of taiga and tundra is all down to a desire to feed dangerous new nuclear build. The nuclear reactor now under construction by Areva in Olkiluoto was supposed to be a fantastic showcase for the nuclear industry. The world has seen that far from being a showcase it has not yet been built and has already seen hundreds of safety and financial scandals.
Finland is home to the summer breeding grounds and migration routes of many species of our much loved overwintering birds here in Cumbria, including whooper swans and fieldfares.

How much Co2 would be released by mining for uranium in the thousands of acres of peat of the taiga and tundra? Does anyone know or care? A recent book claiming to be “The Carbon Footprint of Everything” certainly makes no mention of it (impacts would be far more wide reaching than the burning of peat for fuel). It is becoming increasingly clear that the nuclear industry is a juggernaught out of control.

We understand very well that nuclear power is anathema to a healthy and viable future. It is widely accepted that habitat loss is much more likely to result in extinction than for example hunting!

We strongly oppose uranium mining in Finland and urge you to reverse the laws which allow (force) this to happen.

Please find attached a selection of drawings by children and adults in Cumbria showing threatened wildlife of Finland.