Following a sympathetic court hearing against developers Alburn Minos Ltd and Tesco on July 9 Lewes Road Community Garden supporters are more determined than ever to stay put on one of Brighton's busiest and most polluted roads. The garden is OPEN! 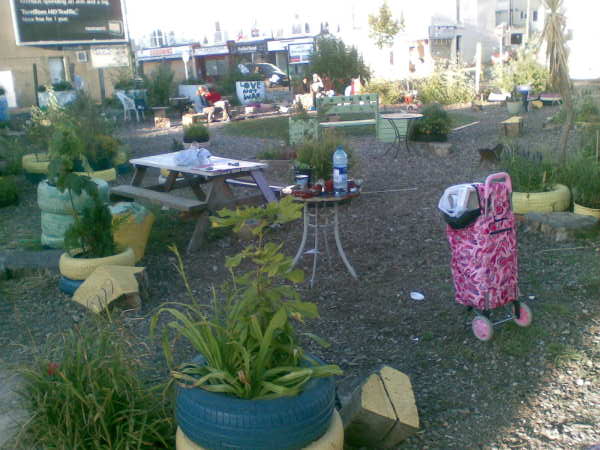 Alburn Minos Ltd and Tesco failed in their attempts to get £3,500 costs awarded against two named individuals who have had to disassociate themselves from the garden because of the legal harrassment and bully-boy tactics typical of corporations in cases ranging from animal rights activists to McLibel.

Judge Coltart said the costs claim was not proportionate and awarded the developers £500 which was raised two days after thanks to ever growing public support now that Tesco is known to be involved. One anonymous donor gave £200 at a garden Eco- Fayre (July 11) and numbers signing the Save LRCG petition are running at 40 a day.

The next step? Gardeners, nearby residents and the wider community are continuing to bring water and plants to the site. Art students have installed a tree sculpture while long time garden supporters are returning now that it is clear Tesco ain't gonna have it their own way.

An eviction order is expected soon with a second attempt by the developers to take the land.

On Friday July 23 a benefit gig is being held at Hectors House pub in Grand Parade featuring punk swing outfit Flat Stanley, Ade Sings Rosselsongs and DJ Gene Defekt. £4 on the door with all the money going to a garden fighting fund.


Lewes Road Community Garden was set up in May 2009 by a group from the local community. It has provided a meeting space and green haven ever since, enjoyed by thousands of people, providing a venue for community events and bringing together local residents many of whom don’t have gardens themselves. There is a food waste compost scheme, and regular events with close to 5,000 people have signed a petition of support for the garden and against Tesco, a betting shop and 7 flats planned.

Gardens by the Community For the community!