As the countdown to the EDL's violent invasion of Bradford approaches, the EDL's hardcore nutzi and racist football hooligan activists preparing to "hit Bradford" for "The Big One", their chance to inflict permanent hatred, fear and terror into the heart of multicultural Britain, the EDL are testing the patience of the police in preparation for "the mother of all race riots", as the Facebook EDL supporters like to call it. 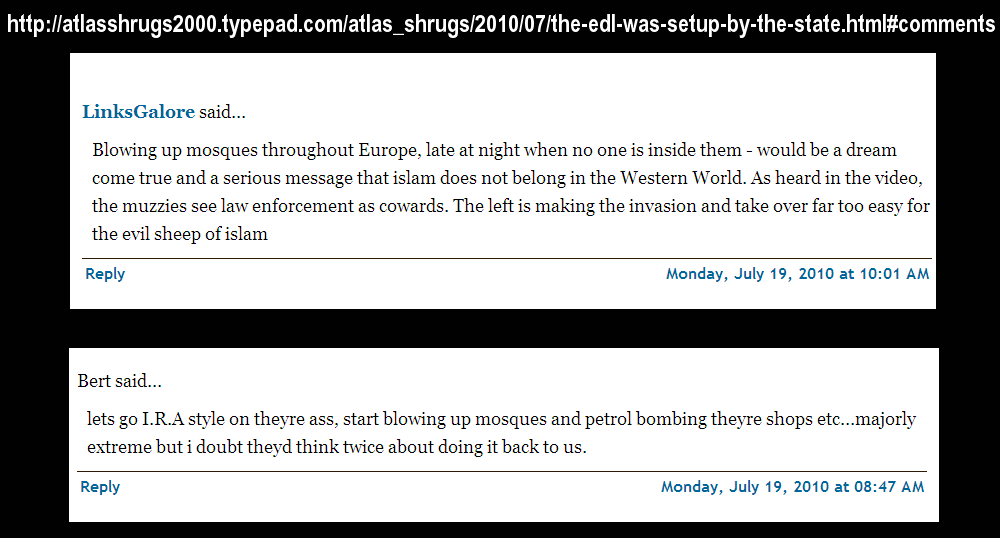 Online, the EDL's facebook site has given up on the pretence of window-dressing as their band of fascist bootboy thugs practice for the ultimate act of racial and religious terror when thousands of masked neo-Nazis arrive in Bradford to attack all-things Asian. It's not just the EDL who will attend in their thousands. There will be BNP, BPP, C18 and Ulster Unionists out looking to beat-up people and destroy property.

Another pro-EDL website, the American far right "Atlas Shrugs" features comments from EDL supporters calling for mosques to be blown up in acts of neo-Nazi terror, which makes an absolute mockery of the troll catchphrases that "the EDL are not Nazis".

Over the weekend, hoards of brainless neanderthal racist thugs turned native and started attacking police, shoppers, passers-by in a frenzy of uncontrolable racist thuggery that refused even to discriminate between Muslim mosques and Hindu temples, trashing a Hindu place of worship in a fervour of out-of-control drunken mayhem.

So much for the warnings of the EDL looking to destroy Bradford as being alarmist. Bricks, bottles, and metal girders were used in the EDL's arsenal of weapons, as the recent promises to kick things off big-time in Bradford were given the light of day in a testbed pogrom in Dudley. The planned mega-mosque in Dudley had been cancelled, and yet, like Oswald Mosley's uniformed thugs, the EDL's real plan is to cause a permanent breakdown of community relations, which is why some of Northern Ireland's bloodiest murderers with links to C18 (residing on social networking site Bebo) are helping to organise the forthcoming Mother Of All Riots at street level.

As they did early in the year, the hardcore football hooligans of the EDL broke away from the police cordon planning to destroy Asian-owned businesses, and yet, coming as a surprise even to the Murdoch-controlled Sky News (cousin of Fox News in the US), only twenty or so arrests were made.

Bradford is still recovering from the riots of 2001, and many shops are boarded up, the city centre a ghost town, compared with neighbouring towns and cities including Leeds, Wakefield and Huddersfield. It doesn't take the brains of a rocket scientist to know that one more night of race riots will leave Bradford knocked out for the count, unable to function. Not to mention a million pound plus policing bill which will cost local people a damaging increase in their council tax, while the EDL's suggardaddy Alan Lake keeps his hands in his pockets.

Compared to other multicultural cities, Bradford has no problem of religious fundamentalism, and has moved on considerably since Salman Rushdie, but we all know why the EDL are coming to Bradford. Wealthy supremo Alan Lake, the funder of the far-right Swedish Democrats (friends of the BNP), knows the importance of Bradford in his race-hate masterplan to infect Britain with Dutch-style Islamophobic paranoia. A few months ago, he posted on the internet his vision of anti-Muslim Kristallnachts happening throughout Europe, especially in Britain, where he loathes the fact that most citizens do not share his racist views.

Permanently shattering any lingering illusions that the EDL are harmless cretins simply up for a scuffle with anyone, and are not the footsoldiers of a forthcoming all-out racial conflict, regular EDL-supporting posters on the Atlas Shrugs blog AtlasShrugs.com (hosted in the United States by Pamela Geller, the raving loonie "self-loathing" Jewish far right collaborator who libellously claimed that Barack Obama isn't American and forged his birth certificate), have been paving for way for a large scale white terrorist outrage to happen in Bradford to coincide with the EDL's impending violent storming of the city (see the screenshots).

Internet trolls and liberal rose-tinted spectacle wearers of the liberal and liberterian persuasion have long argued that many EDL members are redeemable, just like Christian evangelists strongly believe most sinners have repentance in them. It is however, difficult to argue that a baying mob of racist football hooligans chanting "Fuck Allah" and "Smack The P*kis", trying to ransack Asian-owned shops, have any goodness in their heart worthy of salvation. While some just want a ruck with anybody, the vast majority of EDL thugs are BNP voters who are anti-immigrant as much as specifically anti-Muslim, and see the EDL as their chance to gang up, and (with a blind eye of the police and political establishment), violently destroy multicultural Britain.

Plenty of jobs have been lost as a knock-on effect of the excesses of corporate capitalism, and foreign workers have been scapegoated by parties such as the BNP, and even Gordon Brown's "British Jobs For British Workers", but it is hard to believe Yaxley-Lennon (Tommy Robinson) and his cohorts are struggling on the breadline, unable to scape together morsels of food to feed little Bobby Cratchett, while swanning up and down the country on expensive rail tickets, however revolutionary the misguided footsoldiers of the EDL might appear.

The EDL is a counter-revolutionary "crusade" designed to divide and conquer the victims of society by skin-colour and religion, and although some members will be gullible, and just in it for a fight, the lumpen majority are hardcore racist, who hate (and have always done) Asian people, black people, and (contradictorily) are fervently homophobic. They didn't join the EDL to overthrow the state in a political revolution, but rather seek to oppress minorities, while cowering behind the pretence of opposing Islamic extremism.

A tiny minority of EDLers might, by changing their friends, drinking in different pubs, and stopping reading rightwing tabloid newspapers, undergo a miraculous conversion to peace, love and light, changing from hatred to injustice, but sadly, most EDL thugs enjoy being racist and violent, no-matter how much they are forced to read Das Kapital, live in a squat, and burn joss sticks. The fascist organisation's rank-and-file members have been ironically brainwashed into living their lives on a tangent of violent extremism on a parallel with their idealogical foes in Al-Qaeda.

The attached screenshot shows EDL terrorists advocating blowing up mosques in fatal acts of terror. In an age where young Muslim students are locked up for accidentally clicking on the wrong website, surely these EDL members should be traced by MI5. Or is the state only interested in brown-skinned web assailants???

What is beyond explanation is how the authorities have continued to allow the EDL to inflict violence, fear and hatred into stable communities such as Dudley, knowing full well of what will be happening in Bradford in just six weeks time, when their misguided mission to uphold free speech of the British far right will give way to post-riot law lord commision reports and Stan Laurel and Oliver Hardy-style handwringing.

Forget Yorkshire Forward! Whether under the New Labour or Conservative administration, the Public Order Unit is one quango that should most definately disappear. While permitting police to use lethal force onto G20 protestors in London, since the Sheffield interrogation of Mr Yaxley-Lennon, the police have scrapped impartiality, turning their back on the outcome of the Stephen Lawrence Enquiry to side with street fascism.

Since Sheffield, despite stones and bottles being thrown at policemen and women, while the UAF have encountered raised batons and truncheons, the far right EDL have very much been left to do as they please. Even Wigan Mike and Liam Pinkham (Pino88) have got off lightly for serious terrorist offences, leaving many people scratching their heads in utter disbelief.

While militant anarchists would much rather take the EDL on in running street battles, a government ban making use of ASBOs is the only way a deadly riot can be averted, casualties guaranteed. Bradford City Centre already resembles a bomb site, with plenty of building materials strewn all over to be used as missiles. Lloyds Bar is located in the centre of Centenary Square next door to a popular oriental restaurant which serves Halal food, plus an Asian shisha lounge, which will be obvious targets for racially-motivated violence.

The Bradford Riots of 2001 began when the police failed to stop a racist attack outside a bar on Ivegate, and rioters were chased down Thornton Road and into inner-city Manningham. If there is a perceived injustice on August the 28th 2010, aided and abbetted by the unpoliceablity of the EDL's visit (local officers busy, the Leeds festival taking place on the same weekend), expect all hell to break loose. The EDL's YouTube legions tell us with glee that Bradford will turn into World War III, a self-fulfilling prophesy which seems, as the day approaches, more and more unavoidable.

When the post-riot magistrates are in session, will young Asian men reacting to the EDL's provocative presence, be given six years each for throwing single stones at the police, while the primarily guilty EDL thugs escape with paltry community service orders???

NO TROLLS OR EDL APOLOGISTS PLEASE!!

THIS IS INDYMEDIA NOT STORMFRONT!!!