The community campaign against Shell's work in the estuary is going strong with regular actions happening. Last week locals viewed the borehole-drilling rigs during a walk on the strands of the estuary at low tide. Shell moved the rigs yesterday but were slowed down by kayaker action. 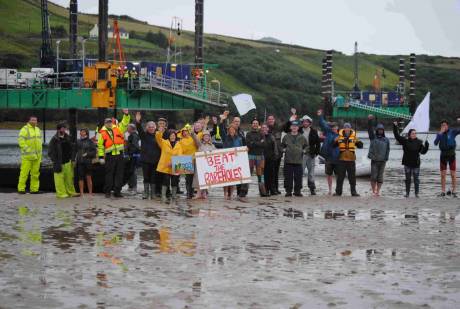 BEAT THE BOREHOLES! COME TO ROSSPORT!

Security around the rigs has been massive - 6-10 security boats including a constant daylight-hours watch on the shore near the solidarity camp, plus two so-called 'safety boats'.

Members of the local community walked close to the drilling barges at low tide and showed their opposition to Shell's destruction of Sruwaddacon estuary. The estuary is not only a Special Area of Conservation and Special Protected Area – it has been an integral part of life in the community for generations. Despite this, Minister John Gormley has given the go-ahead for Shell to damage it.
John Gormley

Last week 8 community supporters from the Rossport Solidarity Camp took their kayaks for a spin out on the water - and were met by a dozen security boats while having a closer look at the barges.

Yesterday signs that Shell were preparing to move the rigs to a new position led to a spontaneous action by a small group of kayakers from the camp. Although they were prevented from getting near the rig by the massive security presence, work seemed to stop while the kayaks were in the water.

Both rigs have now been moved a few miles upriver towards Aghoos, and are positioned opposite the house of Rossport 5 member Willy Corduff - a move some people are viewing as provocative.

Come to support and be part of community resistance. Beat the Boreholes is up and running, sign up for your borehole or find out how you can help – get in touch with Rossport Solidarity Camp!