Final Reminder: 12noon Friday 30th July // Everyone to the Streets 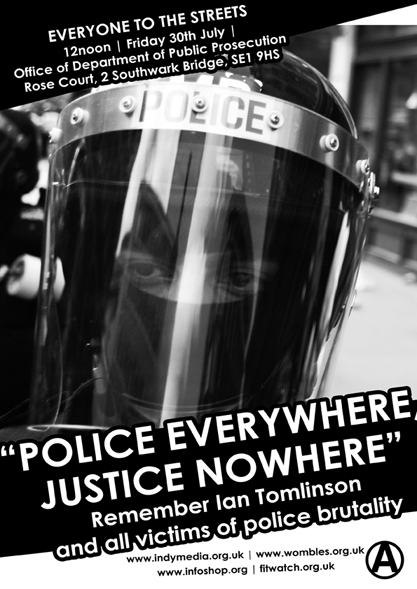 Everyone To the Streets

The decision of the Director of Public Prosecution, Keir Starmer QC, brought an end the process of the charade of civic and legal rights of defence when the police act violently. Violence is often seen as an exception, but how can this pretence be maintained when the violence served up by an institution which monopolises and legalises violence is seen by millions on their TV screens.

When the death of Ian Tomlinson was announced, the major news agencies responded the way they know how, and repeated - mistakenly - that the death was due to actions of the people that were part of the G20 protests. As the legitimacy of the reporting continued to be undermined, as people bypassed the "official" sources of information, and as testimonies were posted on Indymedia the news reacted to correct its "mistake". But there was no mistake. The media acted and acts in the only way it was set-up to act - as a transmission belt of "authoritative", normalising and ultimately self-serving abstract ideas, each self-perpetuating and reproducing passivity and the complete obedience to the official line.

From the aftermath of the G20 tragedy in London on April 1st, 2009 - the return to normality, the easing and softening of the hard language and rhetoric of the politicians and media commentators - the return to trusting that the "liberal" authorities of the state will clean up the mess and root out the "bad apples". As often happens, the crowd is duped, as we all want to believe that the bully we are afraid to fight will be told off by the teacher in the class. But when the teacher and the bully are the same thing, as was illustrated with the actions of the DPP/CPS and Met Police, who do we run to?

The resultant death of Ian Tomlinson, the dozens of violent assaults and injuries, was always a possible outcome of a hysterical press and 24/7 media too eager to create narratives and plots when they failed in reality to find them - too eager to regurgitate the systemic values that present themselves as socially neutral whilst denouncing those that dare act against those supposed generalised values. But nothing is socially neutral. We exist in a loaded context, where acts and effects do not come into being from no where but are part of a process which themselves derive from other processes. Our ability to develop counter strategies is dependent on the extent in which we recognise and acknowledge these processes.

We are left now, many more of us than before the DPP's statement, with a feeling that we have been failed. For us yes, for the gangsters in power it's business as usual. When its one of their own, they band together, they act in solidarity, each element standing firm to the point where their power is maintained and they continue - until the next "mistake". Our problem is that we do not match our enemies with the same element of solidarity towards each other.

On Friday 30th July, we hope to gather many hundreds of people outside the offices of the DPP. We are sick and tired of passively consuming the news, being infuriated by the lack of response. We have decided to be the response, to be the ones that will inspire many more that won't be there with us on that day.

Protests have been called for London, Bristol, Edinburgh and San Francisco, with a demonstration in Norwich already taken place.