Ian Tomlinson died on April 1st 2009 after being attacked by a policeman during the G20 protests in London.

He was walking home from work and had nothing to do with the demonstrations.
A few short moments later he collapsed and died of his injuries. 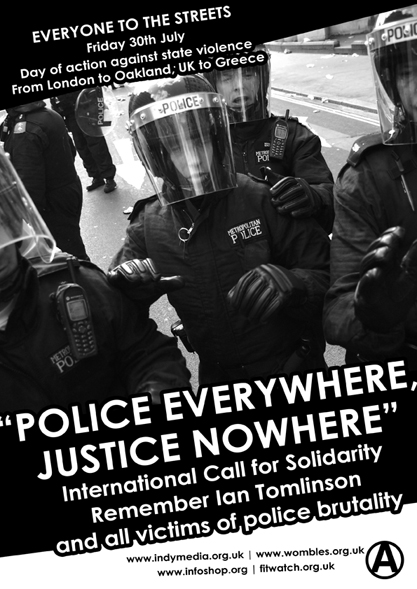 The police immediately attempted a cover-up which fell apart after footage of the death leaked to the media a week later, as well as thousands of other images of police violence against the British public.
Since then, the police, the so-called Independent Police Complaints Commission (IPCC) & the Department of Public Prosecutions (DPP), and other state agencies have been allegedly investigating the death.
Their conclusion? The killer will not be charged with any offence.

They are an ordinary working family and have no access to the finances needed.
The lesson? The police internationally are there to enforce the law, not to abide by it. They are happy to kill and cover-up their crimes.
The British state believes this and all other cases of police killings such as the murder of Jean Charles de Menezes will be forgotten and ignored because the victims are poor.

We demand justice! Demonstrations and pickets are taking place internationally. Lets show solidarity here in Newcastle to all those who suffer police violence. Meet 1pm at Monument, from there we'll go round the corner to the station to picket it and hand out leaflets etc.