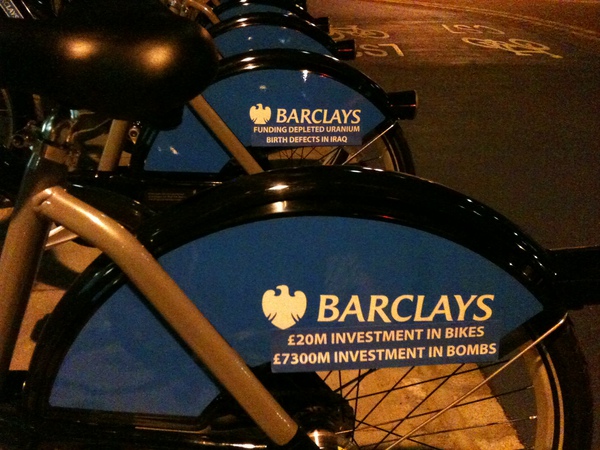 Almost 4000 of the stickers were placed on bikes all over the city last night. They were in the same shade of blue and in the same font that Barclays use and were so designed to blend in with the shameless advertising disgracing every single one of the bikes.

The messages were “INVESTS IN CLUSTER BOMBS. OFFERS LOANS FOR NEW LIMBS” - “DOESN'T GIVE A SHIT ABOUT YOU” - “£20M INVESTMENT IN BIKES. £7300M INVESTMENT IN BOMBS” - “FUNDING DEPLETED URANIUM BIRTH DEFECTS IN IRAQ” and “INVESTS £7.3 BILLION IN THE ARMS TRADE”.

A spokesperson for Transport for London (TfL) claimed that only around 100 bikes had been targeted but activists say this is a gross understatement, claiming to have distributed almost 4000 stickers. TfL also suggested that someone was arrested for this action but this was debunked by the Metropolitan Police who said the arrest was unrelated.

At the Press launch this morning Barclays chairman Magnus Agius was asked his opinion on the stickers, to which he replied “I have nothing to say”. Funny that.

The bikes, which were launched today and operate on a pay-as-you-go scheme, are covered in Barclays branding. The new wider cycle lanes launched across London recently are called 'Barclays Cycle Superhighways' and are painted in Barclays trademark cyan. Campaigners feel that, though the bikes are a step in the right direction, Barclays have exploited the scheme to be one big advertising campaign. No other city worldwide with similar schemes has been fully sponsored by one company. It is hoped the stickers will raise awareness of Barclays position as the largest investor in the arms trade in the world.


A big well done to those sticker happy folks!