On John Bull's other Oisland, otherwoise known as Occupied Oireland and " the oirish free stout?" all sorts of nonsensical reasons are given to protect the innocent Oirish people, from the international media by the paedophile enabling sub-ruling class. Oindymedia Ireland are the only collective that censors my lovers articles worldwide(go check for yourself and I mean ALL other Indymedia worldwide). Maybe its that auld thing of man or a woman can never be a prophetess in its own land. Joyce would be still censored Ireland or maybe not in this era of west Brit dominance and revision on John Bull's other Island. I told one of my clients not to give up hope on the place that one day he will be uncensored like Joyce. Anyway he gave me a job as a part-time skivvy and aked me to get his manuscripts published in Oireland, so here ye are this is the link and for Jaysus sake, Indy media don't ban him again or he will take ye to the European court of Human rights! 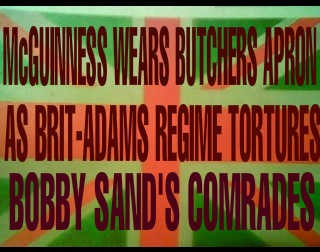 In authoritarian countries such as Britain and John Bull's other island, in which the media is state-controlled, the Internet used to offer a unique space for information-sharing and was an important instrument for protest on matters such as torture and execution squads used by Britain. The Internet gave hope to repressed civil societies and downtrodden people in occupied Ireland for example, who are known as the "niggers of Europe".


Article 19 of the 1948 Universal Declaration of Human Rights which states everyone has "the right to freedom of opinion and expression" and also has the right to "seek, receive and impart" information and ideas "regardless of frontiers, " which was re-affirmed by charters and declarations around the world, has been trampled on in Britain and Occupied Ireland. In Europe, this right is meant to include the 1950 Convention for the Protection of Human Rights and Fundamental Freedoms but is mostl ignored in Britain and occupied Ireland.


Both use “Stalinist-type contempt for press freedom” while conducting smears against journalists critical of British torture, using paedophillia/blackmail and extra-judicial murder by their agents. Smears are also conducted on political dissidents, by their intelligence agents embedded in all of the Irish media including social media, on the basis of campaigns such as "can't make rational decisions because of ideology." Even so called Indymedia in Ireland has been compromised by their agents. Independent investigation into British activities by MI5, in both "Occupied Ireland and the "Irish free state, ?" confirm that they are engaged in "prohibited, covert propaganda activities ... beyond the range of acceptable agency public information activities'.


Britain currently runs “torture-teaching institutions," in Occupied Ireland and is currently testing new torture techniques on political prisoners in Maghaberry Concentration camp for prisoners of conscience locked up after kangaroo trials, using "prison personnel" and prisoners as guinea pigs in the preparation of training manuals, which advocate torture, blackmail, beatings and executions. The programme is run under the cover of a reactionary, mercenary, local collaborator regime, following an earlier experiment conducted by the British, with over 40 years of experimental counter revolutionary war of Black ops,executions squads, shoot to kill civilans, weapon experiemnts, British bombing of scores of Irish citizens in the "free state?' conducted on civil rights activists, since Bloody Sunday, all since used in Iraq and Afghanistan by the British. As a result they have set up a collaborative, Pinochet type regime, that surrendered to them, under the guise of a media white elephant called the "peace process" but in reality more reactionary than the Special Powers Act of the Fascist orange order.

Britain now also stands accused of promoting political paedophile rings since the formation of the Irish free state. Initially used as blackmailed execution squads,these rings now control most of the media, police, judiciary, and "acceptable, sanitized" political parties in the 'sub Irish ruling class'. Britain also stands accused of promoting a culture of "hard drugs" as a tool of division and reactionary counter freedom, particularly in all of Ireland's socially deprived areas.


Britain with centuries of practiced worldwide colonialization, hides its brutality with practiced sophisticated censorship techniques, presented to the best sanitized British hypocritical standards of their thought police. For example censoring non-collaborating British, political and social content in Ireland and it neo-colonies, such as the US(still technically part of the British empire) and other British Commonwealth states with the latest technological tools, by arresting citizen journalists and harassing netizens, using omnipresent surveillance and ID registration worldwide even in the US(British petroleum Gulf Spill and Libya Oil)which compromise anonymity of ordinary citizens, see(BBC cookies on your computer) as one of the World's most repressive governments outsourcing.


In 2009, Britain's web censorship, doubled from just 2008. The World WideWeb is being progressively devoured by the British with the implementation of Intranets whose content is “approved” by British outsourced authorities. The old song Britannia Rules the Waves has been replaced by Britannia Rules Cyberspace in the corridors of power, in the new palace of Thames House, the home of their Insecurity Service's headquarters.

The famous phrase scientia potentia est a Latin maxim "For also knowledge itself is power" which is now paraphrased as "knowledge is power" has been taken to cyberspace extremes for British dominance over the US, Russia, France, Germany, ..etc., etc., .. and of course those damn restless natives the Irish. Unfortunately as with many things associated with the British Empire it is used as justification for a shortsighted reluctance to share information, (See Official Secrets Act) as withholding knowledge for the benefit of the human race, they believe delivers them advantage to exploit the rest of the World. One of their leading philosophers Bacon, summed it up best with the following; "if the world exists solely as the content of consciousness, then knowledge itself can be used to directly manipulate the content of reality"


THIS ARTICLE WILL HAVE A SUBTLE FORM OF CENSORSHIP TO ENSURE THAT VERY FEW READ IT.


PLEASE ASK YOUR FRIENDS TO PASS IT ON IF YOU APPROVE !