Making Our Own Media - public meeting

Oxford Indymedia is the grassroots alternative to the mainstream media. Unlike most news outlets, we don't have any hidden agendas, corporate sponsors, or owners that we have to appease. Our website (which you're currently looking at) allows you to publish your own stories in your own words and with your own pictures. And we have an events calendar so you can promote your events to get more people involved in grassroots actions in Oxford. 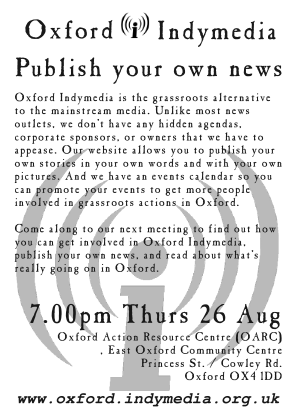 Come along to our meeting to find out how you can get involved in Oxford Indymedia, publish your own news, and read about what's really going on in Oxford.

Oxford Indymedia is part of the UK Indymedia network.