The racist & Islamophobic English Defence League are planning to invade Al Quds Day annual demonstration and march in London on September 4th. The English Defence League [EDL] are an Islamophobic, criminal organisation with links to organised racism. They have rioted in Stoke, Luton, Dudley, Bolton etc have placed pig's heads on Mosques and have pulled of Muslim women's clothing. 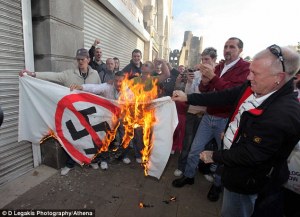 The plans to invade the demonstration and march proves that the EDL who claim to be "against Islamist extremists from Muslims Against Crusades [MAC]" are racists who are against Muslims full stop. They will attack any event or meeting with the word Muslim in it.