Four campaigners against Israeli apartheid were acquitted today of all charges related to two direct action protests against the Israeli cosmetics retailer Ahava in Covent Garden, London. The campaigners locked themselves onto concrete-filled oil drums inside the shop, closing it down for two days in September and December of 2009. 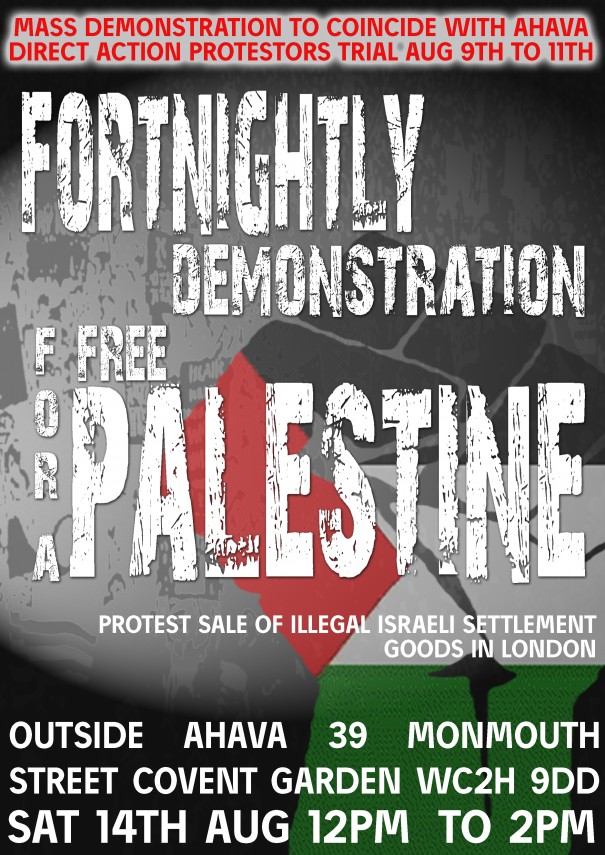 The campaigners insist that they are legally justified in their actions as the shop’s activities are unlawful. All cosmetics on sale in the shop originate from Mitzpe Shalem, an illegal Israeli settlement in the occupied West Bank, and are deliberately mislabelled “Made in Israel”.

To date, no campaigner has been successfully prosecuted and Ahava has consistently refused to cooperate with the prosecuting authorities.

On the first day of trial, prosecutors dropped aggravated trespass charges. This would have required the prosecution to demonstrate Ahava was engaged in lawful activity. Significantly, the CPS decided that this was not something they would attempt to prove.

The primary witness for the prosecution, Ahava’s store manager, refused to attend court to testify despite courts summons and threats of an arrest warrant leading to the activist’s acquittal on all remaining charges.

Ms Crouch, one of the four acquitted today said: “This is a small victory in the wider campaign for boycott, divestment and sanctions against Israel. We’ll continue to challenge corporate complicity in the occupation and Israel’s impunity on the international stage.”

Mr Matthews, another acquitted campaigner, added: “The message is clear. If your company is involved in apartheid and war crimes and occupying Palestinian land, people will occupy your shop.”