Climate Camp Cymru, which was due to continue until Tuesday 17 August at Glyn-Neath in South Wales, was evicted by the police on its second day (Saturday 14th) over alleged complaints about possible damage to the site chosen by the campers, a Roman Hill Fort. The camp was re-established by Sunday 15th on a new site on the Gower Peninsula near Swansea. On Tuesday, the last day of the camp, activists invaded Nant Helen opencast coal mine. 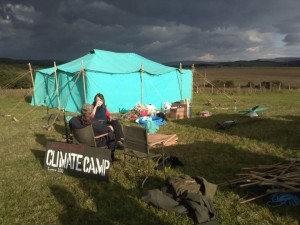 Having stood by uselessly for years while the beautiful landscape of the Welsh Valleys has been systematically trashed by opencast mining companies, South Wales Police seem to have suddenly developed a touching concern for the environment, moving in en masse with riot vans and on horseback to evict the campers on these spurious grounds. While Climate Campers have a well-deserved reputation for clearing up after themselves and are unlikely to have done more damage than stick a few tent pegs in the sacred soil, opencast mining companies destroy whole mountains | 1 | 2 | and important wildlife habitats without the cops appearing to notice or care.

Climate Camp Cymru has issued a press release which states that Cadw, the government body responsible for the site and whose aims, incidentally, are 'to protect and sustain, encourage community engagement in and improve access to the historic environment of Wales', had 'visited the site and accepted that the camp could go ahead with police monitoring.' It seems likely that the cops interpreted this to mean they could stop the camp whenever they wanted. A spokesperson for the camp said: 'This just goes to show the priorities of the current government, who are more interested in protecting climate criminals like Celtic Energy and in repressing those taking action on climate change, than on actually tackling the climate crisis themselves.'

Report from a camper who arrived during the eviction.

News from the camp pre-eviction:

The second Welsh Camp for Climate Action is now underway, keeping up the pressure on opencast mines in the area. Last year's camp was at Merthyr Tydfil, next to the huge Ffos-y-Fran opencast coal mine; this year Climate Camp Cymru has taken a site near Dyffryn Cellwen, north of Glyn-Neath, close to two more opencast mines.

You are invited to join the camp for five days of sustainable living, workshops and direct action against the coal mining industry. Read on to find out how to get involved.

This year's camp is situated close to Nant Helen and Selar opencast coal mines, both of which are run by Celtic Energy, a company which extracts over 1 million tonnes of coal a year from its sites in South Wales. Celtic Energy also operates the nearby Onllwyn coal processing and distribution plant.

400,000 tonnes of coal a year are extracted from the Nant Helen site alone, while the mine at Selar trashed a Site of Special Scientific Interest (SSSI), at Selar Farm, the first SSSI which has ever been allowed to be destroyed in this way.

Climate activists have vowed to take direct action against these sites and others to highlight the need to move away from fossil fuels.

A spokesperson from Climate Camp Cymru said: "Our current economic system is based on an addiction to fossil fuels and on maximising profit at the expense of people and the environment. We need green jobs for Wales, not dirty destruction.

"Burning coal is destroying our climate, while open cast mining damages the earth and the health of local people. We must leave coal in the ground. Fossil fuel corporations like Celtic Energy must not be allowed to progress unchecked. Join a growing number of ordinary people taking direct action, and exploring alternatives, to stop the madness that is destroying the earth. This August 13th -17th come to Climate Camp Cymru."

HOW TO GET THERE

The camp is situated on Camnant Road, North of Dyffryn Cellwen. The nearest train stations are Neath and Aberdare.

For detailed information about getting to the site, read this and visit the Climate Camp Cymru website.

CAMP COINCIDES WITH SENTENCING OF COAL ACTIVISTS IN MERTHYR

While the camp was being established in the hills, climate activists who halted work at Ffos-y-Fran open cast coal mine in April by locking on to the mine's railway track to stop the movement of coal from the mine to Aberthaw power station were being sentenced in Merthyr Tydfil Crown Court. 13 activists from Bristol and Bath Rising Tide were given conditional discharges and restraining orders. The activists pleaded guilty to the lesser charge of Obstruction of the Railway after the initial charges of Obstruction of the Railway with Intent, which carry a maximum sentence of life imprisonment, were dropped.

Ireland's Climate Camp is also happening right now (12-16 August) in County Tyrone, where campers are taking direct action in support of a local community campaign against the new A5 road between Dublin and Derry.

As Climate Camp Cymru finishes, activists will be preparing for the next Camp for Climate Action, which will take place in Edinburgh from 21-24 August. The target for this camp will be the headquarters of the Royal Bank of Scotland (RBS), one of the world's largest investors in oil, gas and coal. Take back the power and break the bank!