Arrogance and greed of Tony Blair

The arrogance and greed of Tony Blair beggars belief. 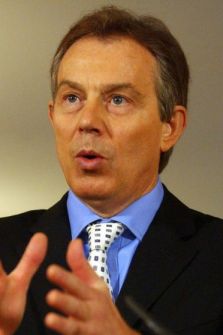 Ex-PM Tony Blair is due next month in Waterstone's for a book signing session for the lunch of his book, A Journey.

Outside will be Stop the War Coalition calling for him to be indicted for War Crimes. Inside unprecedented security for a book signing event.

Anyone who wishes to see Blair will have to be searched, all personal possessions, bags, backpacks and briefcases, must be handed in and all purchasers must wear a wristband giving them access to the man himself.

Blair is refusing to allow any photographs to be taken. No personal messages will be written in his book, A Journey.

I have met many authors. I have chatted with them, they have been only too happy to write in their books, photographs have been allowed. Noam Chomsky, Tariq Ali, John Pilger, Tony Benn. I have been at the Guildford Book Festival for the last few years.

Never have I come across this appalling and arrogant behaviour.

One author I have never met is Brazilian writer Paulo Coelho. I am told he is always courteous, will chat to the people whose books he is only too happy to sign, even if it means a book signing session lasts for hours. His only request is to be given water to drink and time for periodic cigarette breaks.

No former Prime Minister has behaved like Blair, who from the day of leaving office has cashed in.

At the Iraq Inquiry he was the only witness who was obliged to slink out the back door, such is his contempt for the British people. The Metropolitan Police ran up a £273,000 security bill when Blair attended the Chilcot inquiry.

Reg Keys, whose son Thomas was killed in Iraq in 2003, has called on Blair to pay for his security. ‘He is making a fortune out of what I would define as blood money,’ he said. ‘He has got no shame, his very existence is offensive.’

Blair is even cashing in on the Rio 2016 Olympics.

Will Tony Blair be prosecuted for his Iraq war crimes?