Members of Bristol Friends of the Earth, Action for Sustainable Energy for Bristol (ACSEB), Campaign against Climate Change, Newport Against Biofuels (NAB), Food Not Fuel, Greenpeace and Biofuelwatch joined local residents to form a 40 strong banner protest against a proposed biofuel power station in Bristol 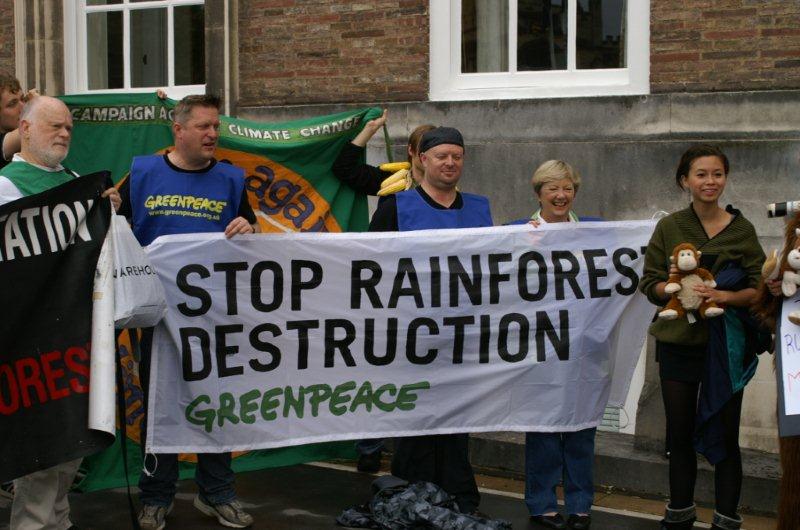 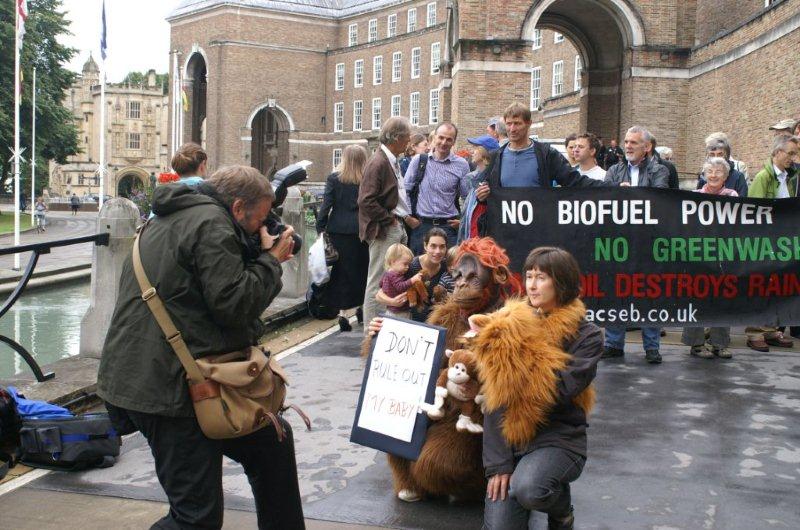 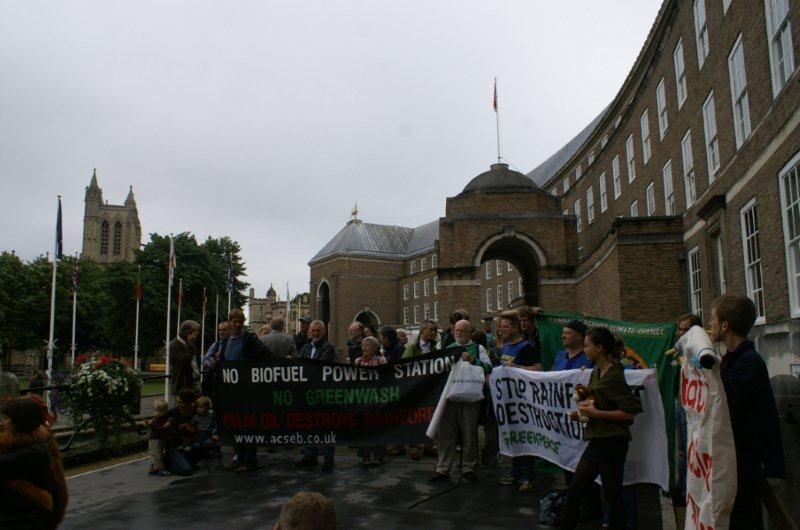 Last year councillors overwhelmingly rejected the application from W4B, citing concerns over the sustainability of the feedstock, which in all likelihood will be palm oil. No one reading this will be surprised that the developer appealed the decision, but they may be shocked that Mr Cookson the Planning Inspector decided that the issue of sustainability was not a matter for the inquiry. At the start of the inquiry, Mr Grant acting on behalf of Bristol City Council (BCC) mounted a robust case that this position went against the very core values of UK planning. This was reiterated by the local and national coalition’s barrister.

Having heard this evidence and the rebuttal of Mr Hill, W4B’s barrister, Mr Cookson, refused to allow any further reference to the source of the fuel and therefore any discussion of habitat & biodiversity loss, impacts on food prices and malnutrition, human rights abuses and to all intents and purpose climate change. So having first allowed sustainability to be discussed, Mr Cookson ruled after two of the inquiries six days that it was in fact inadmissible and that he wanted the inquiry wrapped up by Friday, having been ‘egged on’ by W4B’s barrister to close prematurely. Mr Hill, QC had used this phrase to suggest Bristol’s elected representatives had reached their decision to reject the original application after being ‘egged-on’ by the public gallery, which was once again packed. It is nice to know that local democracy is so derided by our legal profession.

A representative of the Secretary of State has abdicated responsibility for environmental degradation, climate change, social suffering and injustice by cherry-picking text from planning policy that has complete disregard for contrary planning policy that sites climate change and looking after the planet for all, from now on, to render it meaningless rhetoric. So, we heard that he need not be concerned with alternatives or the merits or de-merits of the fuel. We were told in his ruling, that it was not the role of the planning system to regulate the regulators (ofgem). He went on; that we must assume regulation is correct. It is not. It allows deforestation, decimates wildlife, leads to forced land evictions and human rights abuses, challenges food security and sovereignty for the poor and increases greenhouse gas emissions.

Imagine now, a meeting you have attended where no minutes are taken, where you are censored from speaking as you wish and only after a barrister acting on your behalf has protested, are you then told you can provide written evidence. Imagine if you were then told that the chair was not inviting things in writing after you had said that you intended to do this. The public gallery also witnessed the Planning Inspector refuse to supply a written version (which seems somewhat ironic as this was the only apparent way those opposing the appeal could communicate to him…) of his grounds for refusal because it was ‘not in a copyable state’; even though he appeared to be reading them from a computer. He also refused to allow BBC cameras into a public hearing. He then refused the Nr Grants request for an adjournment to give BCC time to consider how best to present their truncated case.

In closing, Mr Hills talked about ‘supporting the unsupportable’ of ‘compounding a felony’. In this Kafkaesque carnival he was not talking about the ‘greenest government ever’ forbidding evidence on land use change and indirect land use change to be admitted. He was not talking about testimony from Oxfam, Action Aid and Survival International about global food insecurity and increased malnutrition being inadmissible. He was referring to the councils conduct in raising climate change and sustainability issues. Earlier he had wondered if CO2 savings were of any remote interest to the Inspector or Secretary of State.

If you are somewhat appalled by this unfit state of affairs please lobby Eric Pickles, who as the Secretary of State for Communities and Local Government will ultimately decide the fate of those who live in 22,000 hectares of rainforest or land equivalent to feeding 112,500 UK citizens. This case is important as any developer could say that global impacts are irrelevant to local development. The quickest way to stop the madness of biofuels for electricity is stop subsidising them with ROCs: Lobby Chris Huhne the Secretary of State for Energy -

http://www.biofuelwatch.org.uk/w4bjul2010.php and join a protest against another W4B biofuel power station in Portland: