The Camp for Climate Action is happening now on a site right next to the Gogarburn Headquarters of the Royal Bank of Scotland near Edinburgh. RBS is one of the world's largest investors in oil, gas and coal and recipient of a £50 billion bailout from public funds. Climate Campers secured the site on Wednesday night in advance of the announced 'swoop' and the camp is now well underway. Everyone is invited to join in four days of training and direct action from 21-24 August. 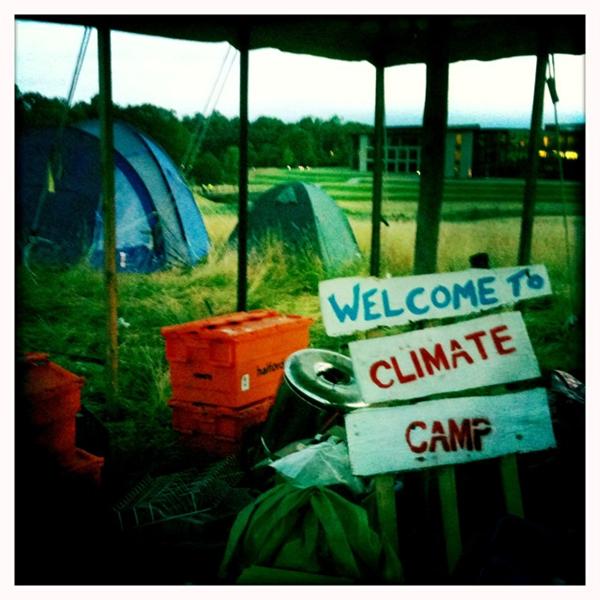 The Camp for Climate Action is a grassroots movement taking direct action against the root causes of climate change. We've already had major successes with Heathrow's third runway and E.ON's plans for a new coal fired power station at Kingsnorth. This year we're targeting the Royal Bank of Scotland, one of the world's largest investors in oil, gas and coal... From tar sands extraction in Canada to coal infrastructure here in the UK, we're paying to trash our future. These projects are not just causing catastrophic climate change but destroying the lives and livelihoods of people across the globe... Ecological destruction is built into the mechanics of the financial system, with communities disenfranchised from their own futures. This is why, in August, people from across the UK will be converging to take back the power and Break the Bank!

Taking the site appears to have gone smoothly apart from three arrests; all three arrestees were later released without charge. By Thursday afternoon much of the camp infrastructure was reported to be in place:

Mains water is being arranged with the co-operation of the Council. Marquees are being erected and kitchens taking shape. The entrance to the Camp provides a view over the back windows and lawn of RBS's global HQ, carved out of the green belt scant months before its hubristic collapse. There wasn't too much activity visible there in the afternoon. Police and security guards are posted at each entrance but there's a marked lack of tension compared with previous years. An article on policing at the camp can be found here.

Climate Camps are collectively organised, non-hierarchical, and everyone is able to participate in the decision-making process, both beforehand and at the camp. The camp invites participants to learn, train up, and meet like minded individuals.

Plans for the camp include:

Occupy and set up the basecamp: 19–20 August

Day of action against RBS and the fossil fuel industry: 23 August

There was a day out from Climate Camp to Cousland on 21 August to participate in Growing Resistance, an event organised by Coal Action Scotland in solidarity with Communities Against Airfield Open Cast.

Report from the Growing Resistance event.

On Sunday, several hundred climate campers, including lots in 'greenwash guerilla' outfits took a stroll across the bridge from the camp and into the grounds of RBS Headquarters. Undeterred by police attempts to keep them on the climate camp side of the bridge, a large number of activists reached the RBS HQ, where it appears that balloons full of molasses (dirty oil) were catapaulted at the building, a couple of windows got broken and some activists may have got onto the roof (unconfirmed).

Monday's Day of Action saw campers taking diverse actions against RBS and other connected climate criminals. Five activists were arrested following an occupation, lock-on and banner drop at the headquarters of Forth Energy in Leith, protesting against the company's plans for four biomass power stations. In Edinburgh, a giant pig delivered and spilt a large quantity of 'oil' at the entrance of oil prospectors Cairn Energy, with more sprayed onto the walls; several branches of RBS also received attention.