Burial of Nuke Waste in Cumbria

A West Cumbrian Councillor has proposed that Allerdale should withdraw from the dodgy process designed to force Cumbria into "geological disposal" of nuclear waste.
The new government like the last is desperate to have been seen to have solved the problem of nuclear waste - to pave the way for new nuclear build. 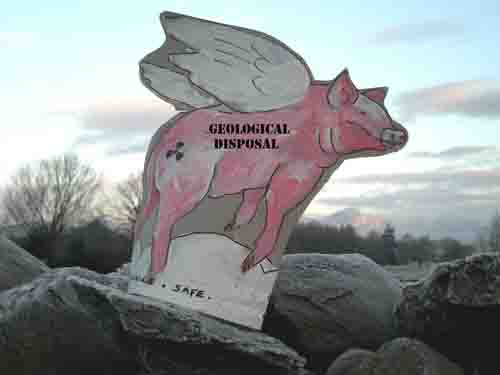 In November 2008 Cumbria County Councillors were denied a vote on what
they described as ‘the most important decision the council will ever
take.”

I was at the meeting and by my reckoning if the "expression of interest" had been allowed a vote Cumbria would have said NO! Interestingly the Chairman Tom Clare said that the unusual decision not to allow a vote had been taken "before
the level of discontent about 'expression of interest' was known"

The nuclear acrobatics continue. Allerdale Councillor Joe Sandwith is now
(along with many Cumbrian and Borough councillors) concerned that Cumbria
is being pushed into a process that is scientifically and democratically
flawed. Councillor Sandwith's motion for Allerdale to withdraw
"expression of interest" has come under fierce pressure from pro nuclear
forces.

For the first time in Allerdale Council's history a motion has been deferred (while seconders are nobbled). Despite this the motion stands and as of today will be put forward at the 22nd September Full Allerdale Council meeting.

The previous government justified their decision to push for burial of high level nuclear waste by saying : “This is the option being taken in the US at Yucca Mountain, Nevada, where highly radioactive fuel will go underground. The Yucca Mountain project involved URS Washington, a key partner in Sellafield's parent body organisation NMP”. Sounds cosy and reasurring.

But the truth is somewhat different with lawsuits against URS Washington and deep disposal of high level nuclear waste in Yucca Mountain now firmly off the agenda because of contamination risks to the regions water, soil and air. The State of Nevada have been vigorously opposing a nuclear waste geological dump at Yucca Mountain for 20 years and spoke on Radio Cumbria last year urging decision makers here in Cumbria to listen to expert advice from sources other than the industry and pronuclear government departments such as the Department of Energy and Climate Change. This has not happened, despite assurances that experts from for example the Nuclear Waste Advisory Associates would be invited to speak to all Cumbrian Councillors. Independent advice appears to be the last thing the pro-geological disposal gang want.

The geology has not changed since Nirex found it to be the worst possible for a nuclear dump - all that has changed is the Governments headlong rush for new nuclear build - which cannot take place without a designated high level nuclear waste dump.

Joe Sandwith is first councillor to stand up and ask that Allerdale withdraws its "expression of interest" - safe to say he will not be the last. Unless we say a strong no now and start urging government to look at other safer options for looking after nuclear wastes - Cumbria may find itself forced to accept much more than one high level waste geological disposal dump -

All the money in the world would not be enough compensation.

Please email Councillor Joe Sandwith a message of support / write to other Allerdale Councillors supporting withdrawal of "expression of interest' in geological disposal.