"We will not leave Münster until this dolphinarium, in which the dolphins are kept in conditions that do not allow for even their basic needs, is closed," say activists of The Black Fish, an environmental and animal conservation organization. The activists, some of whom recently returned from a high-profile campaign to protect the whales against Japanese whalers in the Antarctic, says that they moved to Münster specifically to coordinate the campaign against the dolphinarium. 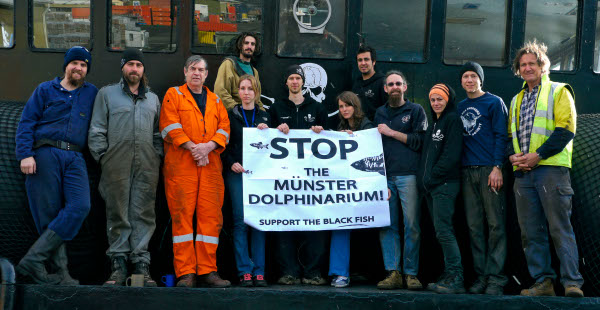 "The conditions in which these four dolphins are kept are appaling. Dolphins are very social and freedom-loving animals who travel very far in the wild. We must not keep them as exotic objects for the purpose of human entertainment." Furthermore, the organs that dolphins use for echolocation waste away in the barren concrete tanks.

Prior to contacting the Dutch owner of Münster's dolphinarium the two activists already launched a visual petition where the people of Münster could have their picture taken while holding an underwater photograph of dolphins in the wild. The activists managed to win the endorsement of former animal-trainer Ric O'Barry, who used to train the dolphins for the 60's tv series "Flipper." O'Barry has been an outspoken critic of dolphinariums for many years.

However, the owners of the Münster dolphinarium say that the legality of their business is beyond any doubt. "We meet and exceed the guidelines for the hunsbandry of mammals," stresses dolphin trainer Jörg Feldhoff. According to Feldhoff the conditions in which the dolphins are kept are monitored regularly and the license of the dolphinarium needs to be renewed every five years. Feldhoff furthermore argues that, "the Münster dolphinarium only keeps bottlenose dolphins, that is, dolphins whose natural habitat are coastal waters;" even in the wild these animals do not travel great distances.

The Black Fish activists disagree with this view. "Dolphins belong in the open sea." The vegan does not only speaks out for dolphins, but also for whales and other marine animals. In the past they have also campaigned against the fur trade and rodeo events. As members of the international animal protection organization "Sea Shepherd Conservation Society" they have been involved in several of their campaigns over the years.

In Australia many of The Black Fish crew worked as crew members for Sea Shepherd; some traveled to Ghana to receive a new vessel, a former Norwegian whaling ship, for the organization, and overhauled and repaired the vessel in Mauritius before embarking on the long journey down to antarctica together with 32 other crew members. "On the last campaign we managed to save the lives of 527 whales." The Black Fish is confident that they can also help the Münster dolphins and return them to freedom.

The solidarity fund XminusY has supported the dolphinarium campaign in Münster. For more information about their work see: http://xminy.nl