Tasers in Nottingham and elsewhere

Tasers are becoming an increasingly prominent tool in the arsenal of police in Nottinghamshire and elsewhere. This should raise important questions, regardless of whether you accept the anarchist critique of the police as a tool of state control, view them as a necessary evil or actually regard the boys in blue as good for society. However, these questions do not seem to be asked. Despite a number of high profile incidents when tasers have been deployed, we continue to creep towards a situation where police are routinely armed without any public debate on whether this is actually what we want or not. 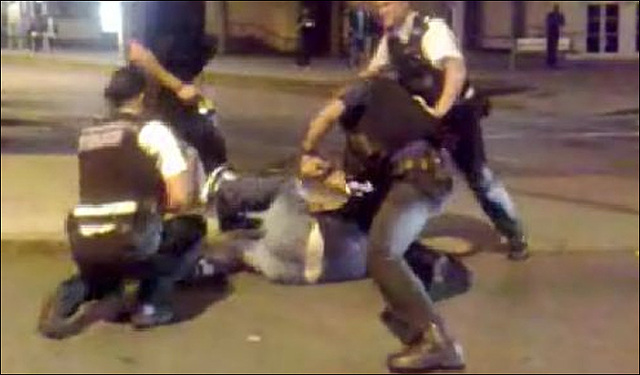 The most high-profile incident locally was the tasering of a man outside Flares on Upper Parliament Street. The incident, in June last year, was captured on video which for some reason was handed over to radio station Trent FM, but quickly found its way onto YouTube and from there became a major national story.

The incident was referred to the Independent Police Complaints Commission (IPCC), a notoriously toothless organisation. They concluded their investigation in February of this year, announcing, "The investigation examined force and national policies on the use of tasers by police officers and police guidelines on managing conflict. It found that the actions of the police officers in these circumstances were within relevant policies. The investigation sought the opinion of a private sector expert in the use of tasers and force. His view was that the actions of the officers and the decision to deploy a taser several times, and not to use any alternative such as a baton or incapacitant spray, was compliant with their training and relevant guidelines."

Whether these guidelines were correct was not considered, a point raised by Amnesty International who noted, in response to the IPCC's report, that "current policing guidelines do not specify clearly that these weapons should be used only when there is a genuine threat to life or very serious injury. This, in our view, leaves the risk that the Taser may be used when officers are presented with far less threatening situations." In Amnesty's views, tasers, "which inflict excruciating pain" should only be used by highly trained officers in situations where there is a genuine risk to life. They urged "the Home Office to review the policing guidelines on the use of Tasers so as to ensure that officers only use the weapon when absolutely necessary."

When initially deployed, there was much fanfare about tasers as a "non-lethal" alternative to firearms. A growing list of fatalities, following the deployment of tasers has forced the abandonment of this as a selling point and the weapons are now billed as "less lethal". Experience in Nottingham and elsewhere, demonstrates that in any case tasers are usually not used in situations where a firearm would be deployed, but instead serve to lower the threshold of violence, possibly encouraging police brutality.

This is quite apart of course, from any questions about the competence of the officers using the weapons. On Wednesday August 4th, police were called to Alexander Street in Stapleford following reports of "anti-social behaviour." Reportedly, one man "became aggressive" towards the officers (a turn of phrase used by both Nottinghamshire Police and the BBC). At this point the police used a taser against him, but missed (or to use the police's own wording, the taser "did not connect with the man") and hit Jodie Gallagher who was standing behind him.

This case was referred to the IPCC, but they decided to hand the case back to Notts Police without even bothering to organise a sham investigation. The IPCC said: "In making this decision the IPCC considered a number of factors including that the girl was stood near the intended target , who moved as the officer discharged the Taser." Note that they state this as fact even before an investigation has happened. They were also content "that the police officer concerned took prompt actions to rectify the incident by stopping the discharge as soon as he realised the mistake and ensuring she was not injured. We are also aware that Nottinghamshire Police have apologised to the girl and her family." That makes it alright then? What's 50,000 volts between friends?

On the same day this story was published in the Nottingham Post, that paper was carrying another taser related story on the front cover, reporting that "POLICE dog handlers had to use a Taser gun on a crazed dog which savaged its owner in her flat." The Post states, "Police said the use of the Taser on the dog was 'extremely unusual' but they had no other option to ensure everyone's safety." Unfortunately, the paper doesn't make it clear if this is actually recommended policy or whether the officers involved were improvising, hoping that the weapon wouldn't simply enrage the animal further.

Perhaps the most interesting aspect of the article is the final line which reveals that "Notts police officers trained to use Tasers now include road police and dog section officers." When the weapon was first introduced to the force it was only trained firearms officers who were issued with them. This is now changing. As the weapons become routine, we can expect to see them deployed in a increasingly diverse situation. In all likelihood this will include them being used against protesters. In August 2005, police in Pittsburgh attacked a counter recruitment demonstration using both Tasers and pepper spray against protesters. Nobody should kid themselves that this couldn't happen here. During last year's G20, in an incident which has received remarkably little coverage, the Met Police threatened peaceful protesters with a taser while evicting a squat in London.

Another worrying taser-related development recently was the death of Raul Moat, who shot himself after police used a "Taser Xrep" in an attempt to subdue him. The Xrep is a new weapon developed by Taser International. Unlike earlier tasers it is a wireless weapon which can be fired from any 12-gauge pump-action shotgun. The deployment of this weapon was a surprise because it is still undergoing testing by the Home Office and the Association of Chief Police Officers (Acpo) did not know Northumbria Police had these weapons. While there are questions about the impartiality of some of the research used in previous Home Office trials, you might hope that the police would at least conduct some testing of weapons before using them against members of the public. Cynics might also note that this was a particularly high profile case and if the police were prepared to use an untested weapon in the full glare of the international media spotlight what are they up to on a day-to-day basis?

Tasers have been introduced with minimal mainstream debate. We are slipping towards a situation where police are routinely armed and nobody has been asked if this is what they actually want. This may be par for the course, but the near-total silence of activists on this point is surprising and unfortunate. We may believe the police today are violent and oppressive, they didn't need a taser to do for Ian Tomlinson, but we shouldn't dismiss this as irrelevant. Tasers lower the threshold of violence and in doing so make it more likely.