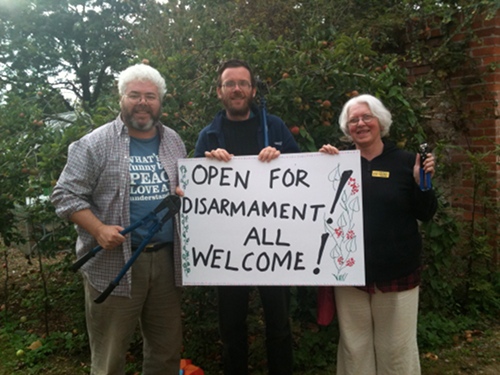 Three Christian peace activists were arrested at AWE Aldermaston after opening the base for disarmament. The three, Fr.Martin Newell (43), Passionist Priest from the London Catholic Worker, Susan Clarkson (63) of the Oxford Catholic Worker, and Chris Cole (47) father of three - also from Oxford, cut a doorway into the outer fence of nuclear base. The group then attached a sign saying ‘Open for Disarmament: All Welcome’. The three then entered the base, through the new gateway knelt and prayed.

In a statement the three said: “We come to the Atomic Weapons Establishment at Aldermaston to open a new gateway into this tightly guarded factory of death. We come inspired by the message of Jesus to love our enemies, to be peacemakers and to live act nonviolently at all times. This week marks the 30th anniversary of the first act of nuclear disarmament, the ‘Ploughshares 8’ and we act, inspired by that spirit of disarmament. We believe that AWE Aldermaston and its extensive and expensive new development programme needs to be exposed for what it is: a factory for the creation of weapons of mass destruction which have the power to destroy this beautiful world, given to us by God, our loving creator, to care and tend.

The three are still be held at Newbury Police Station - 5.40.p.m.

They're out now. They've been charged with criminal damage, and the police are referring SOCPA charges to the Attorney General.

An article about TP demos this morning, this action, and detailing some of the problems associated with the site, fires, contamination etc now up on BBC website

BTW You forgot to tick 'Oxford' when you published this (I've now ticked it).

For future reference, anything related to Aldermaston is definitely considered relevant to the 'Oxford' area, so it'd be great if you'd post it to Oxford as well (by ticking the box).

Well done for the action!

Photos of the Disarmament Gate and Arrest 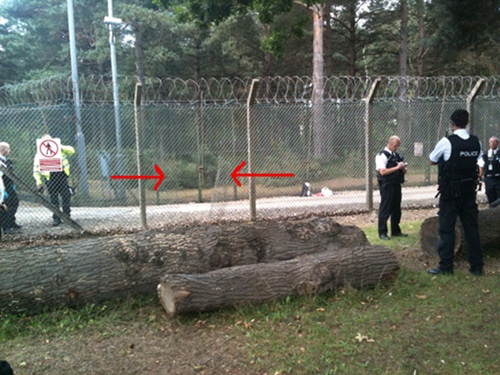 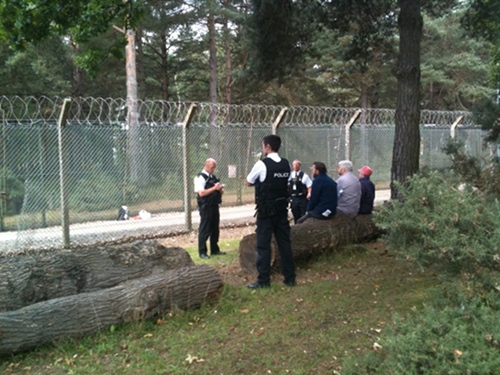 Photos of the Disarmament Gate and Arrest