Campaign group Radiation Free Lakeland have written to all Allerdale Councillors urging them to support Councillor Joe Sandwith's proposal that they should withdraw from the dodgy process designed to force Cumbria into "geological disposal" of nuclear waste. 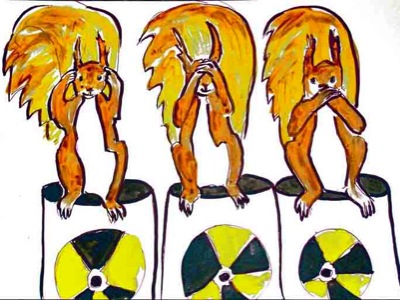 Despite enormous pressure from pro nuclear forces to prevent it, a motion is scheduled to be put forward on 22nd Sept urging Allerdale to withdraw its "expression of interest." A spokesperson from Radiation Free Lakeland said "Councillor Sandwith's concerns are supported by an increasing number of scientists. Up until, now much like the financial crisis, the government is not listening to those concerns. Dr Rachel Western BA(Oxon) PhD and Member of the Royal Society of Chemistry has written a summary of some of these concerns which concludes:

Unfortunately, within the ‘Partnership’ approach to the plans for disposal there is no procedure for ensuring that the disposal plans are adequately scrutinised. Given the possible implications of the project for the Cumbrian economy and the well-being of Cumbrians it is imperative that Allerdale ensures that is not shepherded into a nuclear waste burial scheme that results in the area becoming
permanently blighted".

Councillor Joe Sandwith is the first to propose withdrawal from this dodgy
process - safe to say he won't be the last".

Sent by Email : To Allerdale Councillors
- Motion to withdraw "expression of interest"

I am writing to you on behalf of Radiation Free Lakeland to ask that you give serious consideration to supporting Councillor Joe Sandwith's motion to withdraw Allerdale's expression of interest in the 'Partnership' process called 'Managing
Radioactive Wastes Safely.'

The Partnership is looking solely at 'geological disposal' rather than the safest option for high level radioactive wastes.

Rather than signing up to an "expression of interest" in geological disposal we would urge Allerdale to ask the Secretary of State, Chris Huhne to ensure that radioactive wastes are not put 'out of sight and out of mind' but that the management of nuclear wastes should follow clear environmental principles.

* the policy of 'dilute and disperse' as a form of radioactive waste
management (i.e. discharges into the sea, underground water table or
atmosphere) be rejected in favour of a policy of 'concentrate and contain'
(i.e. store safely on-site)

* the unnecessary transport of radioactive and other hazardous wastes be
opposed

* wastes should be managed on-site where produced in a facility that
allows monitoring and retrieval of the wastes.

The following document was written by Dr Rachel Western - an expert in the chemistry of geological disposal. As far as we are aware the independent expert advice which Cumbria County Council promised to local councillors outlining the hazards of geological disposal has not been forthcoming. 'Advice' has come from the industry and pronuclear government departments. This shallow 'advice' is not good enough as Dr Rachel Western's presentation indicates. Please read this and consider supporting Councillor Joe Sandwith's motion to withdraw an expression of interest.


Allerdale and the Partnership
KEY POINTS – PROBLEMS WITH DEEP DISPOSAL

In the 1990s Nirex’s plan to dispose of nuclear waste in Cumbria was rejected after the proposal was scrutinised at a Public Inquiry and significant geological and technical problems were found. Overall, the Planning Inspector concluded that the Nuclear Industry should not be given the go-ahead to begin their planned programme:

“in [their] current state of inadequate knowledge”

However; under the new ( 2008 ) Planning Act, this sort of scrutiny is no longer possible. March 2010 – One Hundred Plus Problems with Disposal

Now, in 2010 the problems identified in the 1990s have not been sorted out. In fact, in March of this year Nuclear Waste Advisory Associates (NWAA ) identified over one hundred problems that remain to be addressed before disposal could go ahead. A few of these problems are set out below.

Despite NDA’s claims that a ‘multi-barrier’ approach would be taken to disposal (see for example the March 2010 NDA ‘Implementation’ report. ) The truth of the matter is that a disposal facility would have to have a release pathway for gas – which would inevitably also allow radioactive contamination to be released to the surface.

It has been realised for some time (since at least 1987) that a disposal facility would be likely to produce a large quantity of hydrogen gas. Although the hydrogen would not be radioactive, it would present problems because there would be so much of it. Due to the amounts involved there would need to be a release pathway so that a pressure build-up was avoided. Such a release pathway would obviously also provide an escape route for radioactivity.

This contradiction between the need to release gas but at the same prevent leakage of radioactivity seems no nearer resolution now than when the problem was first identified over twenty years ago.

The nuclear industry anticipate that radioactivity would be absorbed on its journey back to the surface, so that less would reach the people above. But unfortunately it is proving very difficult to produce reliable figures of just how much less. ‘Sorption’ is the process by which radioactivity seeping out of a disposal facility would be taken up by the rock surfaces. However because the chemical reactions between the radioactivity and the rocks are so complex, the nuclear industry are forced to use data that does “not [to] have any predictive capabilities”.

To predict the final dose to people at the surface, reliable calculations are needed of just how contaminated water seeping out of the disposal facility would be. However, the nuclear industry are simply unable to provide accurate estimates - in fact the error levels in their calculations can be huge.

Three examples are given below – and the supporting documentation is set
out at the end of this text.

i) Radioactive Carbon - up to one thousand.

ii) Plutonium - up to ten thousand

It is quite clear that the problems identified in the 1990s have not been resolved and that there are many severe problems still affecting notion of deep disposal of radioactive wastes.

Unfortunately, within the ‘Partnership’ approach to the plans for disposal there is no procedure for ensuring that the disposal plans are adequately scrutinised. Given the possible implications of the project for the Cumbrian economy and the well-being of Cumbrians it is imperative that Allerdale ensures that is not shepherded into a nuclear waste burial scheme that results in the area becoming permanently blighted.

Cellulose - the woody compound used to make paper – breaks down into
chemicals that can make plutonium up to 10, 000 times more likely to get
into underground water supplies. , This means it would be ten
thousand times more likely to get into crops or drinking water if it was
dumped in Landfill. The Consultation document from 2006 makes it quite
clear that ‘alpha’ wastes – which include plutonium - in combination with
cellulose, are planned to be included in the Nuclear Landfill dump
plans.

In 1991 the nuclear industry carried out a test on the reliability of
their ability to predict contamination levels. The test was carried out
at the ‘Pocos de Caldas’ uranium mine in Brazil.

The contamination level that was predicted was:

However, when actual contamination levels were measured, the level that
was found was:
3 x 10 –3 mg/l (p10)

It can be seen that the Nuclear Industry under-estimated the uranium
contamination level by a factor of:

Four possible explanations for were put forward for this degree of error
( pp12-13) – though no definitive conclusion was reached. Over fifteen
years later ( in 2007 ), the nuclear industry are still quoting data
ranges for uranium contamination levels that can vary up to one hundred
million units

http://ec.europa.eu/dgs/jrc/downloads/jrc_reference_report_2009_10_geol_disposal.pdf
The gas would be produced due to the corrosion of iron within an
atmosphere that doesn’t contain oxygen. The steel would be used both
for waste containers and also in structural components of the disposal
facility.
Nirex, ‘Viability Report’ ( Nov ’05 )
’The Viability of a Phased Geological Repository Concept for the Long-term
Management of the UK's Radioactive Waste’ (Nirex Report N/122) November
2005 ( page 55 )
[

http://www.nda.gov.uk/documents/upload/The-viability-of-a-phased-geological-repository-concept-for-the-long-term-management-of-the-UK-s-radioactive-waste-Nirex-Report-N-122-November-2005.pdf
]
EU JRC ( Oct ’09 ) page 18
EU JRC ( Oct ’09 ) page 18
EU JRC ( Oct ’09 ) page 18
The reason for this is that their calculations are based on the
behaviour of chemical ‘elements’ – whereas in the real world chemical
elements link up with others in a huge range of different ways – and so
have a huge range of different behaviours.
The ’Nuclear Industry Waste Executive – now part of the ‘NDA@ - the
Nuclear Decommissioning Authority
Basis of dose calculation – ‘C-14 could be transported to the biosphere
in either gas or groundwater. If it is released in gaseous form as
methane, transported to the soil zone and metabolised by microbes, it
could enter the food chain. Calculations based on this pathway in the
GPA [1] indicate that, to meet the regulatory risk target, the tolerable
rate of release of C-14 as methane is: 2.4 x 10-3 TBq/year (based on a
release area of 10,000m2)." - [Nirex, ‘C-14: How we are addressing the
issues February 2006’, (Technical Note: Number: 498808) page 1]
units - TBq/year
'PAMINA Gas Report' “Uncertainties Associated with Modelling the
Consequences of Gas” DELIVERABLE (D-N°: D2.2.B.2)
Simon Norris (NDA) Nuclear Decommissioning Authority
26th March 2008 – page 75
units - TBq/year
- released as a gas
10 / 0.0024 = 4,000 times
Ewart (1988) NSS/G103
F T Ewart et al, “Chemical and Microbiological Effects in the Near Field:
Current Status” p19
Cross (1989) NSS/R151p3
Feb 2006 – Consultation on Reclassificiation of Nuclear Waste
”A Public Consultation on Policy for the Long Term Management of Solid Low
Level Radioactive Waste in the Untied Kingdom” 28 Feb 2006
Department of Trade and Industry ( DTI ) and DEFRA ( Department for
Environment, Food and Rural Affairs ) – see page 68. Wastes with alpha
activity includes plutonium wastes. The Sellafield site, which is a large
scale producer of wastes, is for the most part a plutonium production
complex. This means that it generatea a very large amount of wastes that
are contaminated with plutonium
Feb 2006 Consultation document – page 68
Cross (1991) NSS/R252
J.E. Cross, D.S. Gabriel, A. Haworth, I Neretnicks, S.M. Sharland and C.J.
Tweed
“Modelling of Redox Front and Uranium Movement in a Uranium Mine at Pocos
de Caldas Brazil”
(NSS/R252 ) Nirex, 1991
(i) not fully crystalline (ii) non-stoichiometric –ie – the relative
amount of the constituents in the relevant compound wasn’t a simple
ratio (iii) colloids – ie large unwieldy compounds, and (iv) the
presence of uranium (V)
D Swan and C P Jackson (SERCO) ‘Formal Structured Data Elicitation of
Uranium Solubility in the Near Field - Report to Nirex’ (SA/ENV/0920
Issue 3 - March 2007 – page 6