Why we love to hate conspiracy theories: 9/11 Truth as threat to intelligentsia

Especially left and liberal professionals and service intellectuals but also right-wing members of the intelligentsia vehemently attack and ridicule “conspiracy theories” such as the present 911 Truth movement.

Why? It’s as though power did not covertly orchestrate its predation of us? Is that not the modus operandi of power? 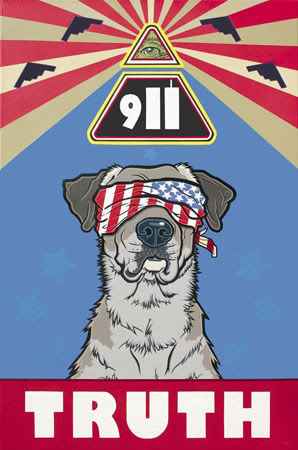 Especially left and liberal professionals and service intellectuals but also right-wing members of the intelligentsia vehemently attack and ridicule “conspiracy theories” such as the present 911 Truth movement.

It’s as though power did not covertly orchestrate its predation of us? Is that not the modus operandi of power?

Is it so difficult to believe that the complex and highly successful military attack on US soil that was 911 (levelling three gigantic sky scrapers, blasting a hole into the Pentagon, and destroying four commercial jets and their passengers) was not orchestrated by a religious zealot from a cave in Afghanistan and executed by failed Cessna pilot trainees with box cutters? Or that those who measurably benefited in the trillions had nothing to do with it?

What the hell? Not even (admittedly rare) authoritative mainstream reports seem to matter [1].

What ever happened to “war is a racket” and “follow the money”?

In rigorous compliance with the true meanings of "academic freedom" [2] and "freedom of the press" virtually no academics or mainstream journalists have made it their research to find truth or to radically (at the root) question the establishment version.

Indeed, all the major and considered-radical academic pundits such as Noam Chomsky and Ward Churchill, have actively avoided the possibility that the 911 attacks could have been known or aided from within the finance-corporate-military complex.

What keeps them from crossing that line? What makes them demean attempts to cross that line? [3]

Similarly, even outspoken dissident parliamentary politicians such as George Galloway have ridiculed the concerns of 911 truthers (at his last public talk in Ottawa).

Is such self and projected censorship by star intellectuals only the result of the fear of being mobbed by ridicule? Is asking these questions in public fora so dangerous?

When barred and suppressed Afghan Member of Parliament Malalai Joya was asked about 911 by a truther in Ottawa last year she replied that those who sought answers in this matter should address their questions to the occupiers of the White House. To this writer’s knowledge, this is the furthest that any politician has gone in this direction, coming from “the bravest woman in Afghanistan” no less.

But what shocked the present writer more is the derision to which was subjected the truther at the Malalai Joya Ottawa event, at the hands of an “activist” and “progressive” crowd.

The intelligentsia appears to be addicted to the illusion that it has a monopoly on valid analysis and understanding. In order to preserve this illusion and to protect its standing in providing interpretations of the World, the intelligentsia must limit the scope of all investigations to domains that fall within its self-established interpretational paradigms (right-left, power politics, geopolitical chess board, corporate motives, etc.) and self-established research protocols.

Those paradigms and protocols, in turn, and the rigorously followed discipline of not supposing the worst in one’s research stance, were established in academia at the time when “academic freedom” was being defined by the cornerstone nineteenth century US battles for professional independence in academia. The academics and society lost that battle [2]:
“[T]he economists were the first professional analysts to be “broken in,” in a battle that defined the limits of academic freedom in universities. The academic system would from that point on impose a strict operational separation between inquiry and theorizing as acceptable and social reform as unacceptable.

Any academic wishing to preserve her position understood what this meant. As a side product, academics became virtuosos at nurturing a self-image of importance despite this fatal limitation on their societal relevance, with verbiage such as: The truth is our most powerful weapon, the pen is mightier than the sword, a good idea can change the world, reason will take us out of darkness, etc.”

And power owns the media.

But much more importantly power owns us, owns our jobs, owns students at school and owns the homeless on the street, the First Peoples on the reserves and the prisoners in the jails. As long as we are owned, information about abuse of power is irrelevant for social change.

This is the sociological fact that the 911 Truth movement has failed to recognize [4]. Truth will not set us free. Truth and information do not lead to action. It’s not a question of how many folks know the truth.

It’s only a question of what the truth means in real terms to however few individuals and will these individuals rebel, actually rebel and individually take back power over their lives.

Contrary to the mantra of our left academic idols, truth and research are not threatening to power in a culture of subservience and obedience. In such a culture, radical-in-thought academics only stabilize the system by neutralizing the more action-minded youth. [5]

In such a culture, the only truth that is threatening to power is one that it perceives as an attack on its self-image [6]. And, in such a culture, psychological self-image arising from power’s connection to the broader society is the only force that can move power to constrain itself [6]. In this measure, in the present culture, 911 Truth could have an impact. In this way, some of the low-level actual perpetrators and facilitators of 911 could eventually be sacrificed in show trials or in mainstream smear campaigns.

In conclusion, the intelligentsia works at protecting itself (and by extension the system) and therefore will be a visceral opponent of 911 Truth until it can integrate 911 Truth and participate in neutralizing 911 Truth in order for power to save face. Or, some citizens might actually rebel? The extent and projection/potential of such pockets of rebellion is the only force capable of leveraging real concessions from power [7][8][9].


[6] “Psycho-biological basis for image leverage and the case of Israel” by Denis G. Rancourt, 2010.


[7] “On the racism and pathology of left progressive First-World activism” by Denis G. Rancourt, 2010.


[8] “Roundabout as conflict-avoidance versus Malcolm X’s psychology of liberation” by Denis G. Rancourt, 2010.


corbettreport.com: 9/11 Truth is Still the Issue

* Denis G. Rancourt was a tenured and full professor of physics at the University of Ottawa in Canada. He practiced several areas of science which were funded by a national agency and ran an internationally recognized laboratory. He published over 100 articles in leading scientific journals. He developed popular activism courses and was an outspoken critic of the university administration and a defender of student and Palestinian rights. He was fired for his dissidence in 2009 by a president who is a staunch supporter of Israeli policy. [See: rancourt.academicfreedom.ca]