Opposing the cuts in Oxford

Opposition to the planned public sector spending cuts is growing across Oxfordshire and beyond.

In early September there was a sit-in protest in Lloyds Bank in central Oxford. Protesters pointed out that the banks are being funded by the public at the expense of our frontline services including heath care, social services, and housing.

A week later, Oxford Save Our Services held a public meeting to start mapping the cuts in Oxfordshire and to start building resistance to them. Around 50 people - including service users and public sector workers whose jobs could be under threat - all spoke about the cuts that were being made. These ranged from closing the GAP homeless project, stopping schools & parks projects, closing care centres, turning off speed cameras, and much more.

There was a passionate speech from Stuart (pictured) who had been to the Oxfordshire County Council 'Big Debate' meeting calling for solidarity amongst all those seeking to oppose the cuts.

Resistance to the cuts is in fairly early stages, but rapidly gathering momentum. Events coming up in the near future include:
23 September 7pm: Town Hall Oxford Trades Council open community meeting for all groups and unions against the cuts.
27 September: Oxford Save Our Services planning meeting. Update: Meeting details.
3 October: Demonstration at the Tory party conference. Coaches going from Oxford.
20 October (day of the Comprehensive Spending Review): National day of action against the cuts. 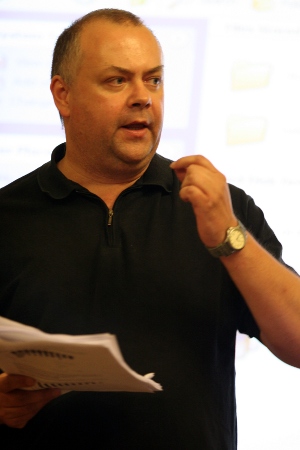