The English Defence League have stated that they they have pulled the merchandise ie clothing range following accusations from some EDL that Tommy Robinson and Kev Carrol were keeping the money. English Defence League insiders however know that the truth is rather different. The real reason for the clothing line being withdrawn by Tommy Robinson is as follows in the video. 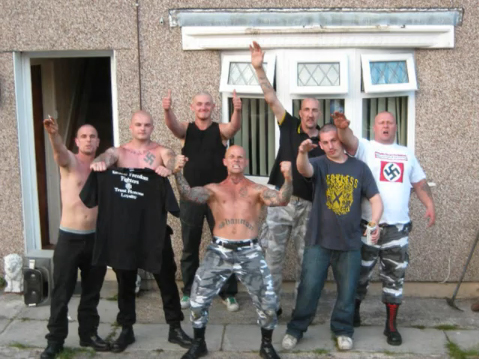 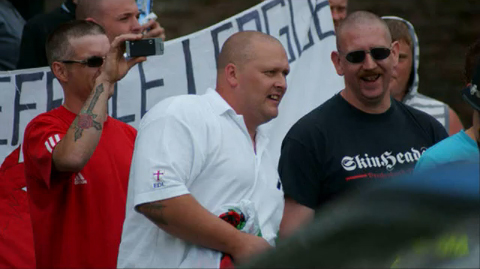 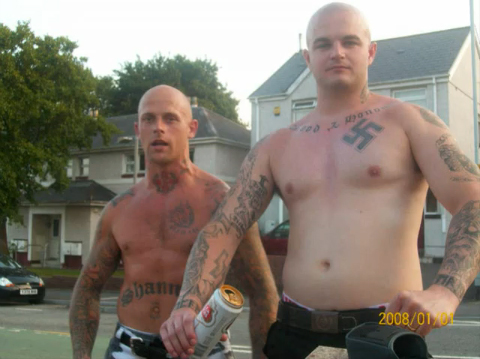 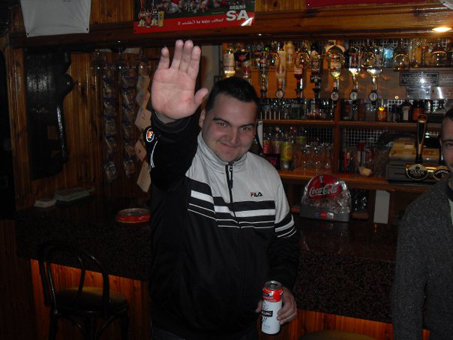 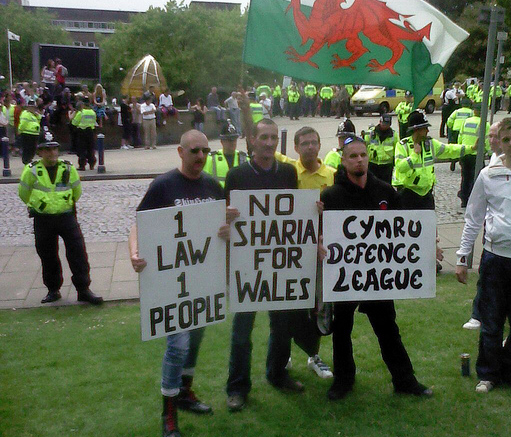 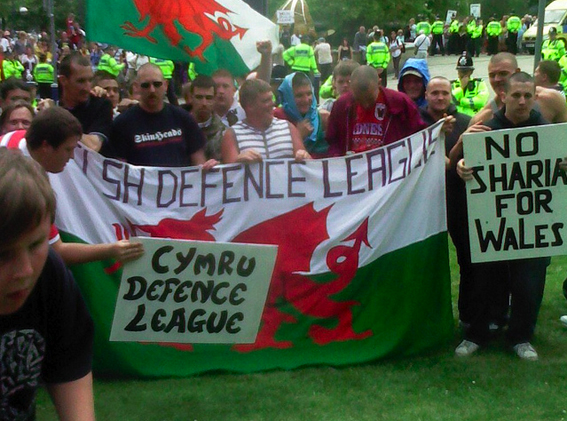 nazis in photo are not EDL

the photos are of swansea C18, they are barred from EDL and WDL demonstrations, one of these idiots arrived at the Bradford and was told to leave the demonstration by the stewards, these people are not wanted, and they have intentionally set out to damage the WDL for some reason, they are history plain and simple.

lol. homoerotic or what!

Who are these buffed-up Nazis kidding? I've seen less homoeroticism in a gay club on the planet Gay!

Please come out of the closet, guys, you'll feel much better for it.

Swansea C18 are the WDL 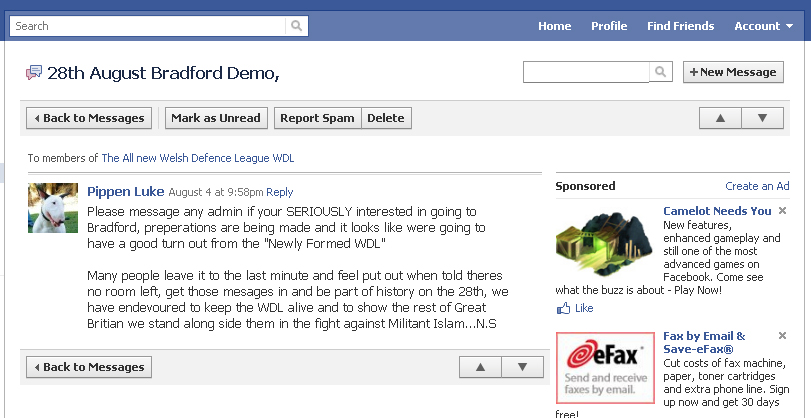 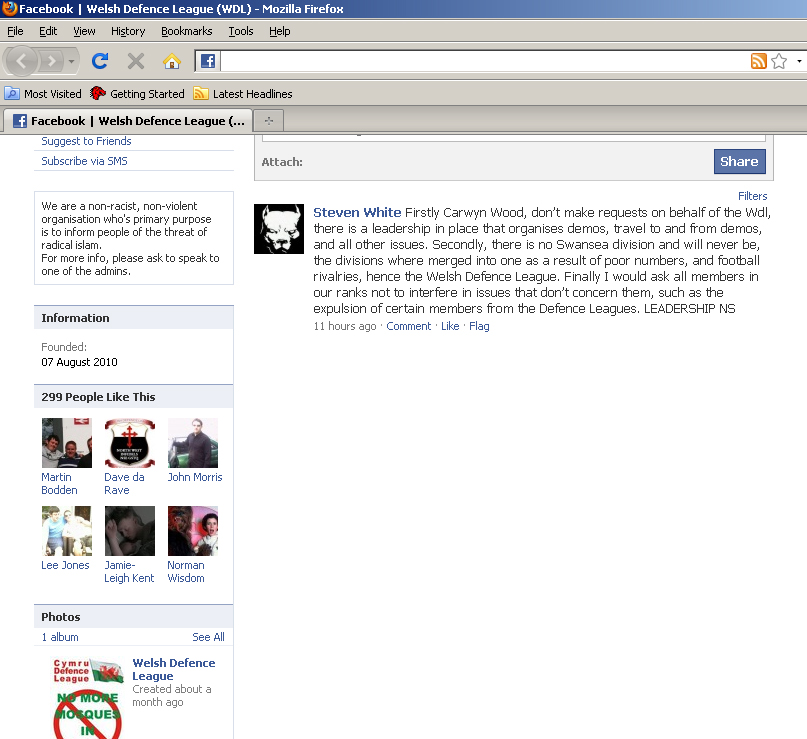 Thanks for your input "anon", ie - Jeff Marsh. Yes the people in these photos are Swansea C18, yes some of these people have finally been ostracised by the WDL - for refusing to stop making Nazi salutes on demos, and yes Jeff Marsh is still happy to work with the known C18 members with whom he currently runs the WDL.

The Swansea C18 member who runs the Casuals United Blog with EDL Wales / WDL founder Jeff Marsh is Luke Pippen. In the first set of photos (uploaded above) Luke Pippen is on the left in the 1st photo, making a Hitler salute with a cigarette in his hand. Standing next to him, with the Swastika tattoo on his chest and holding the T-shirt of a Nazi gang called the "British Freedom Fighters" (sic) is Jeff Marsh's other assistant Steven White.

I've uploaded a new set of images here, including screen-captures from Jeff's own Casuals United Blog and from inside the Welsh Defence League's "private" (ho ho) Facebook wall showing how Luke Pippen and Steven White organise EDL supporters and book coaches for eg - the WDL Cardiff and EDL Bolton and Bradford demos, and showing how Steven White issuing orders to the EDL "ranks" on behalf of the EDL leadership.

You've been taking the piss for too long Jeff but now the net is well and truly closing - you will be going back to jail soon.

In the case of Bryan Powell, "these people" were not "removed" by EDL stewards, these Nazis ARE the EDL stewards

Look before you leap, Jeff :)

Q1: "uk fightback seems to know more about what swansea C18 are doing than anybody else"?
A1: UK Fightback knows alot LESS about what Swansea C18 are up to than you do Jeff, seeing as how Luke Pippen and Steven White help you to run the WDL and Casuals United

uk fightback generally causes tension and bad feeling in the anti-fascist community, this is why he is not street active, because he has made so many enemies in anti-fascist circles, could uk fightback be actually against us? this question has been raised before.

You don't actually play chess do you Jeff

On EDL Facebook etc, Jeff Marsh described himself as a "Ninja" and the "Teflon Don"... NY gangster John Gotti was known as the Teflon Don because he AVOIDED getting caught - Jeff Marsh in contrast has been to jail 3 times and is currently doing community service and a 5 year ban for carrying weapons to football; and in order to be a Ninja you'd have to be clever enough to operate UN-detected

UK Fightback doesn't cause tension and bad feeling in the Anti-Fascist community (but he's not afraid to speak out when inevitable disagreements emerge about Anti-Fascists tactics). UK Fightback is street active, but appears not to be because he's less conspicuous than Jeff's, er... generous frame; and yes of course UK Fightback is against "us", if by "us" you mean Jeff Marsh, C18 and the EDL 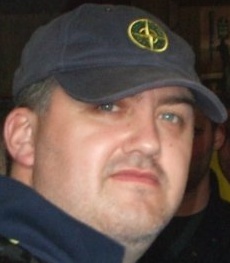 uk fightback causes bad feeling in the anti-fascist community? looking at uk fightback on youtube, his channel has over 4,000 friends, jeff marsh's arryedl channel has 87 friends, arryedl's had 16,000 channel hits, ukf's had over 1.6 million

we get the photos for uk fightback

we get the photos done, then we send them to uk fightback, who gets them put on the internet, then gerry gable from searchlight pays us,the more tasks we carry out the more we get paid, Bradford was a great money earner for myself when I appeared in front of the journalists and cameras. I show up, then I get paid.

No Jeff, the irony is, your people help us for FREE

how can uk fightback be street active? you don`t even go out of the house. you spend the whole time indoors like a hermit because nobody wants to know you.are you going to keep using the Swansea photos forever? they have been barred from activities and if they show their faces at any demos, then they will be "thrown" off, the other fool that you use on you videos, the lad with the bomber jacket was punched in the face for doing that stupid right arm movement, he too has been barred from demos,you seem to forget, anti-fascists have been prosecuted for doing right arm salutes like the one in Bolton. keep on producing those pathetic videos of yours, because they are not making any difference to the EDL. LEICESTER next! maybe Southhampton one day.

Since the info above was first posted, Jeff Marsh has removed references to Combat 18 activist Luke Pippen from his Casuals United Blog, but if you Google the search terms "CasualsUnited" "Luke+Pippen" (all as one Google search) and click on the Cached results, these are still available, clear for everyone to see, proving Jeff Marsh works with this Nazi

uk fightback. neil lees claims that the photos of the nazi idiots who have been expelled from the WDL were taken from the WDL facebook page, now for starters photographs of that nature would never have been allowed on in the first place, this brings about the question, where did Lees obtain the photos from?

Jeff Marsh you twat there is no "Neil Less", but where did the photos come from? Open accounts on Flickr, Bebo and Facebook, You Tube screen-caps, your Casuals United Blog, your "private" EDL Facebook accounts, etc etc ;)

Marshy is losing the plot

Is it me or are Marshy's "anon" posts getting ever more incoherent and garbled, serious case of plot loss going on I reckon. And as for there being no nazi's in the EDL, fuck right off, we've all seen the photos that you lot yourselves post up to the internet, no point blaming non-existant bogeymen and youtubers for your own fuck ups when you make them so publicly.

Even the idiots supporting Skrewdriver......

A post on EDL organiser and Welsh Defence League founder Jeff Marsh's Casuals United Blog says that "the WDL has been SCRAPPED". What Jeff's referring to is exposure by the UK Fightback campaign (and allied You Tube channels and posts on Indymedia etc, as above) that many EDL supporters are Nazis, and that Jeff's co-organisers Steven White and Luke Pippen are 100% proven Nazis too. IF it turns out that the WDL really has been scrapped (and I'll believe it when I see it, because the WDL Facebook pages are all still on-line) then by any standards that would be a victory for Anti-Fascists. What I think Jeff means by "scrapped" is however that the WDL *may* continue without him, which is ironic, because if (as Jeff claims) he really isn't a Nazi, then that will leave the WDL in the hands of the Nazis who discredited it, making the EDL's Welsh Division even more Nazi than it was before, not less!

Jeff's excuse is that "Swansea C18 (Nazis) decided to hijack it (the WDL) and poison the name as they dont like us having Jewish and black members", and Jeff is right to say that "there is not a single pic that has Jeff Marsh in it with these Nazis", but this is hardly the "devastating flaw" Jeff likes to think it is, since the reason Anti-Fascist campaigns hurt the WDL was because the WDL does NOT have black or Jewish members, but DOES have Nazi members, including Nazis in the WDL leadership, and because those Nazis work directly with Jeff Marsh.

As for the "privilaged access" (sic) Jeff trolls about above, there wasn't any (just good research skills), but Jeff's own books reveal HE knew alot about the internal workings of Welsh branches of the BNP and KKK. As for WDL supporting Skrewdriver, watch this video - 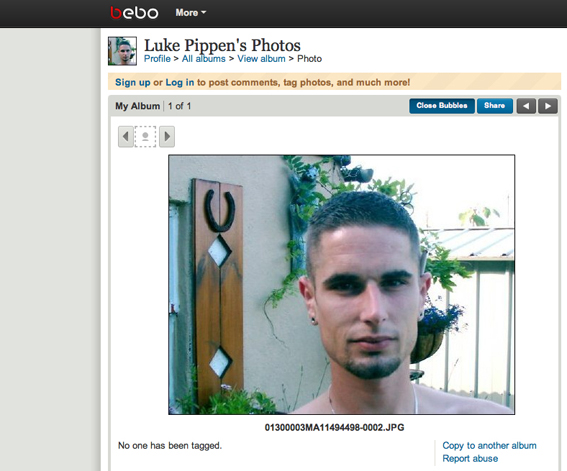 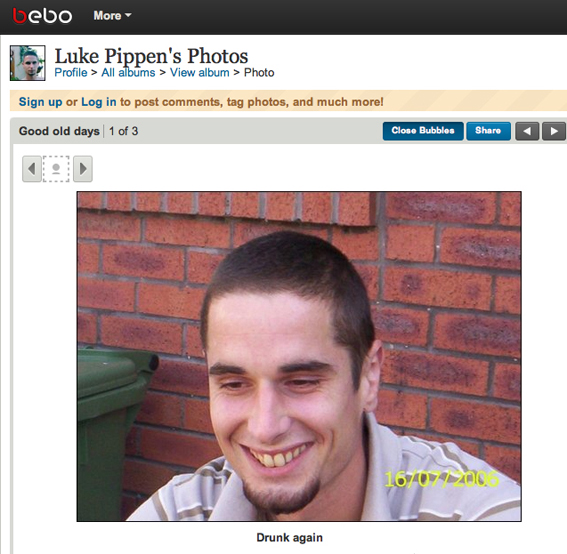 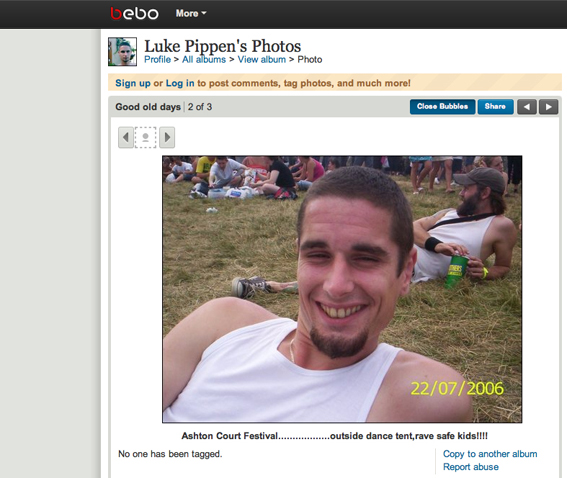 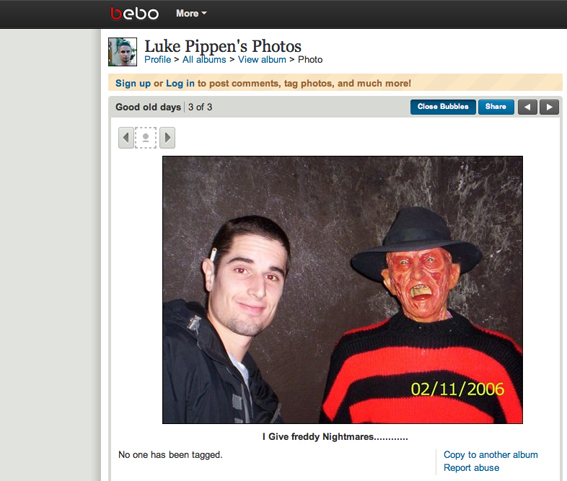 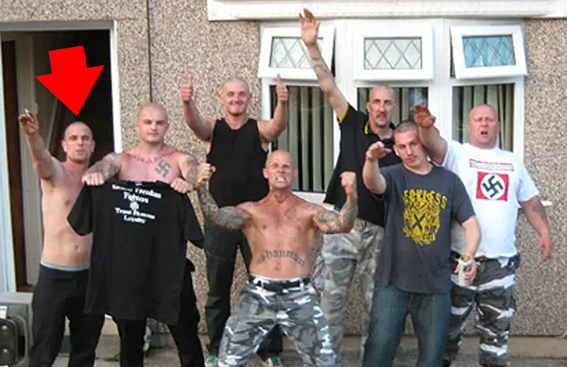 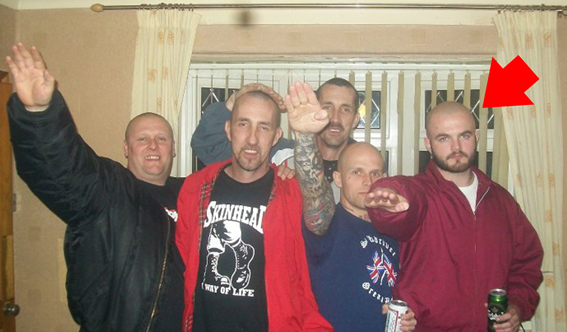 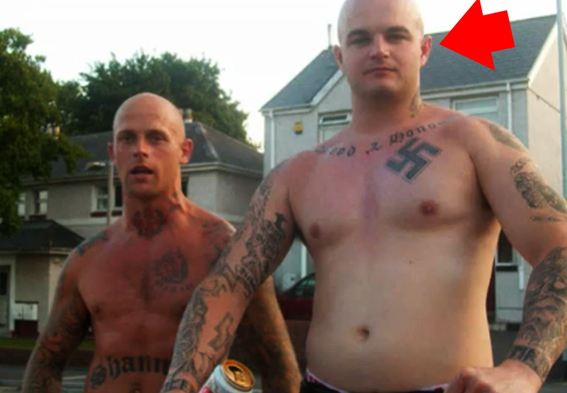 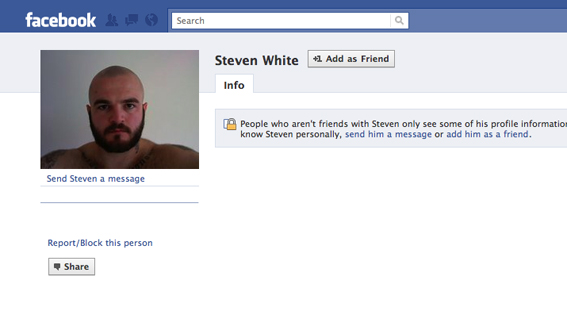 Plenty more where these came from, watch this space

Marshy must be really losing the plot now,making crap allegations against non-existant "anti-facists" that were not even a serious attempt.
Give it up Jeff, you're only making yourself look even more stupid than we already know you to be.