Askia Sabur is a 29-year-old African man who was savagely beaten by a mob of black cops in West Philly in front of a Chinese restaraunt on 55th St. and Landsdowne Ave. On Friday, September 17, organizations such as the New Black Panther Party, MOVE, Poor Righteous Party of the Black Nation, the Uhuru Solidarity Movement and the International People’s Democratic Uhuru Movement (InPDUM) marched with the African community and the family of Askia Sabur on the 19th police district, demanding justice for Askia and the entire black community. 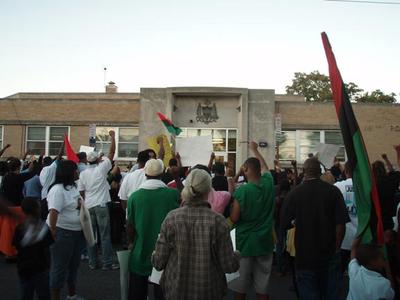 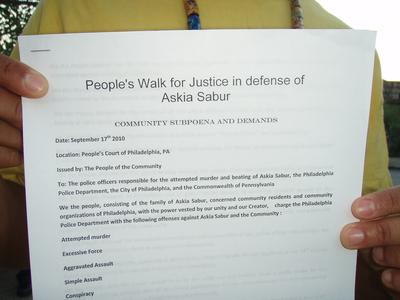 The attack began while Askia was waiting for his food. Anyone who has ever ordered food from a Chinese restaurant this time of year knows how hot those joints get. It was very hot inside the store, so rather than lose 5 pounds in sweat Askia and his friends waited right outside.

This is when the pigs pounced on him. “Give up the corner!” they demanded. These are words that every man in the African community has heard a pig say at some point in his life. For Askia, these words ended up being the last ones he would hear before being beaten nearly to death.

Askia tried to diffuse the clear threat the pigs made, seeking sanctuary in the Chinese joint. He turned around and tried go back in the store to wait on his order. This is when the police pounced on him.

While the imperialist controlled, police friendly media reports that Askia provoked the confrontation with the pigs – the African community knows better, and the video shows the world what we already knew.

Askia was a victim of the same terror that we have had to live with for the past 500 years. In one period it was called slavery. Then it was Jim Crow. Today it's Stop and Frisk.

In attempt to sweep this, and other similar attacks that have recently occurred in the 19th district under the rug, the Philadelphia police department is withholding the names of the 6 police who viciously beat Askia.

The march organizers denounced the release of the terrorist police and demanded their immediate arrest and imprisonment, and that alll charges against Askia be dropped.

InPDUM unites with these demands. We also believe that Askia’s beating is just one episode of what is an intensifying colonial war on the black community by the City of Philadelphia, especially its police force.

Under the leadership of sellout Negro mayor Michael Nutter, Philadelphia has become the city with the highest incarceration rate in the US.

Anti-African policies like stop and frisk have become the tactic of choice, turning our communities into occupied territories, much like Afghanistan or Palestine.

It is clear that the question of police brutality is not just unique to Askia’s attack. What makes his attack significant is that it was caught on video.

In fact, when InPDUM President Diop Olugbala asked how many people present at the march for Askia had been beaten by the police the overwhelming majority raised their hands!

Even more clear is the City’s inability and unwillingness to stop the police attacks on our community.

In fact, no police officer in Philadelphia’s history has ever been prosecuted by the City, much less convicted, of acts of brutality against black people.

During a city council hearing in 2009, mayor Nutter announced a $1 billion budget for police and prisons that attack black people.

When Diop Olugbala stood up during this same city council hearing to protest Nutter’s flagrant theft and misuse of the African community’s resources he too was beaten by police on video.

He was subsequently arrested, charged and convicted of aggravated assault on the police, even though the police attacked him!

This is evidence of the fact that there is no justice to be found for African people by white power, even when it is represented in a black face.

InPDUM is committed to taking the judicial process into the hands of the African community itself.

Shortly before Askia’s beating, InPDUM had called for the March for Black Justice as a means of mobilizing the African masses who suffer ongoing attacks at the hands of the City and to seize community control over the courts and police.

The March for Black Justice will bring a contingent of African militants and the community at large through Market Street(starting on 8th Avenue), the main thoroughfare of downtown Philadelphia, and end with a protest on the footsteps of the Philadelphia Courthouse (Criminal Justice Center) at 13th Avenue and Filbert Street.

The March will be held on the day of Diop Olugbala's sentencing on October 13 at 8 am.

2. Reparations to the African community - $1 billion for economic development, not police, prisons and courts.

3. Immediate community controlled investigation of all cases of Africans who have been brutalized, framed up and killed by police, judges, DAs and other agents of the local court, prison and police system.

4. Immediate prosecution, conviction and imprisonment of all police, judges, DAs and other agents of the local court, prison and police system found guilty of crimes against the people through the aforementioned investigations.

5. Immediate release of all African people who have been imprisoned due to the frame ups, US government controlled drug economy and other malicious, profit driven and anti-African policies of the City of Philadelphia.

Resist the US War on the Black Community!
Freedom and Reparations Now!